Could eco-friendly flying be on the horizon? | Environment | All topics from climate change to conservation | DW | 22.11.2018

Air travel is the fastest-growing source of carbon emissions. But could green tech and optimization mean that one day, we'll be able to hop on a plane with a guilt-free conscience? 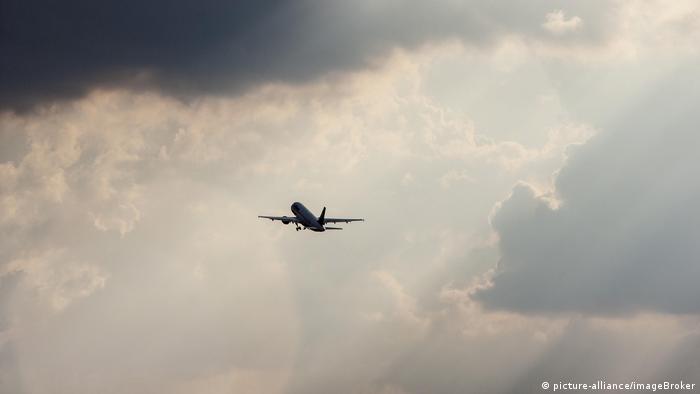 A new hashtag from Sweden has captured a peculiarly 21st century angst: #flygskam — or flying shame. That's the gnawing awareness that you're consuming more than your fair share of the carbon budget.

To keep within the 2 degrees of global warming, scientists have calculated that we each have a personal allowance of about 2 tons of CO2 per year. In Germany, per capita emissions are about 4.5 times that; in the United States around eight.

Which means hopping on a plane for a jolly does feel pretty shameful.

That meant buying more secondhand, eating less meat and growing his own veggies. But perhaps the biggest change was how he travels. "I decided to stop flying almost two years ago now," he told DW. "It's impossible to be fossil-free with flying at the moment."

A recent journey to Slovenia took him two days by train.

Fortunately, his bosses at his TV sports commentator job have been sympathetic to his carbon diet. Because while Ferry says he's not one to protest in the streets, "If Swedish television hadn't accepted my way of traveling, then I would have probably quit the job."

An admirable stance. One we probably all know we should join him in.

"Flying is a very difficult and uncomfortable subject," says Magdalena Heuwieser of the international Stay Grounded network. "For many of us, it has become normal."

"But the point is: How are we going to get a grip on climate change?" she asks.

And while other sectors are being radically overhauled, there's little sign of change from aviation — now the fastest-growing source of CO2.

So is Ferry's cold-turkey approach the only answer? Or could new technology lead to eco-friendly flights, just as the switch to renewables is cleaning up the power sector?

Battery-powered planes are still in the early stages of development, and experts don't expect them to be rolled out large-scale within the next two decades.

But it is already possible to manufacture aircraft fuel from renewable power. Water is electrolyzed to generate hydrogen, CO2 from the atmosphere is added and — presto! — you have synthetic kerosene that fuels planes just fine.

Power-to-liquid (PtL), as it's called, is preferable to biofuels which come with their own environmental costs, primarily because of the huge amount of land needed to grow the raw material.

But so far, PtL fuels are pricy. Experts say a price on carbon could change the math, allowing producers in countries that generate large volumes of affordable sun, wind and hydropower to compete against dirty old fossil fuels.

Norway, which gets the vast majority of its electricity from hydropower, already has a large-scale facility that's to start producing the stuff on an industrial scale in 2020.

So is climate-neutral air travel within reach?

Well, aside from an effective carbon price being nowhere on the horizon, the answer is ... it's complicated. Because CO2 emissions aren't the only factor behind planes heating up the planet.

At high altitudes, contrails — that is, clouds of ice crystals and ozone from air traffic — have a greenhouse effect as well. In fact, this currently causes about twice as much climate impact as the CO2 from flying itself. And that effect is just as bad regardless of whether the fuel is fossil or synthetic.

Clouds from aircraft reflect the sun's rays back into space. But that effect can be reduced — "or even reversed," according to Stefanie Meilinger, a professor of sustainable technology at the Hochschule Bonn-Rhein-Sieg in Germany — by "optimizing" routes. 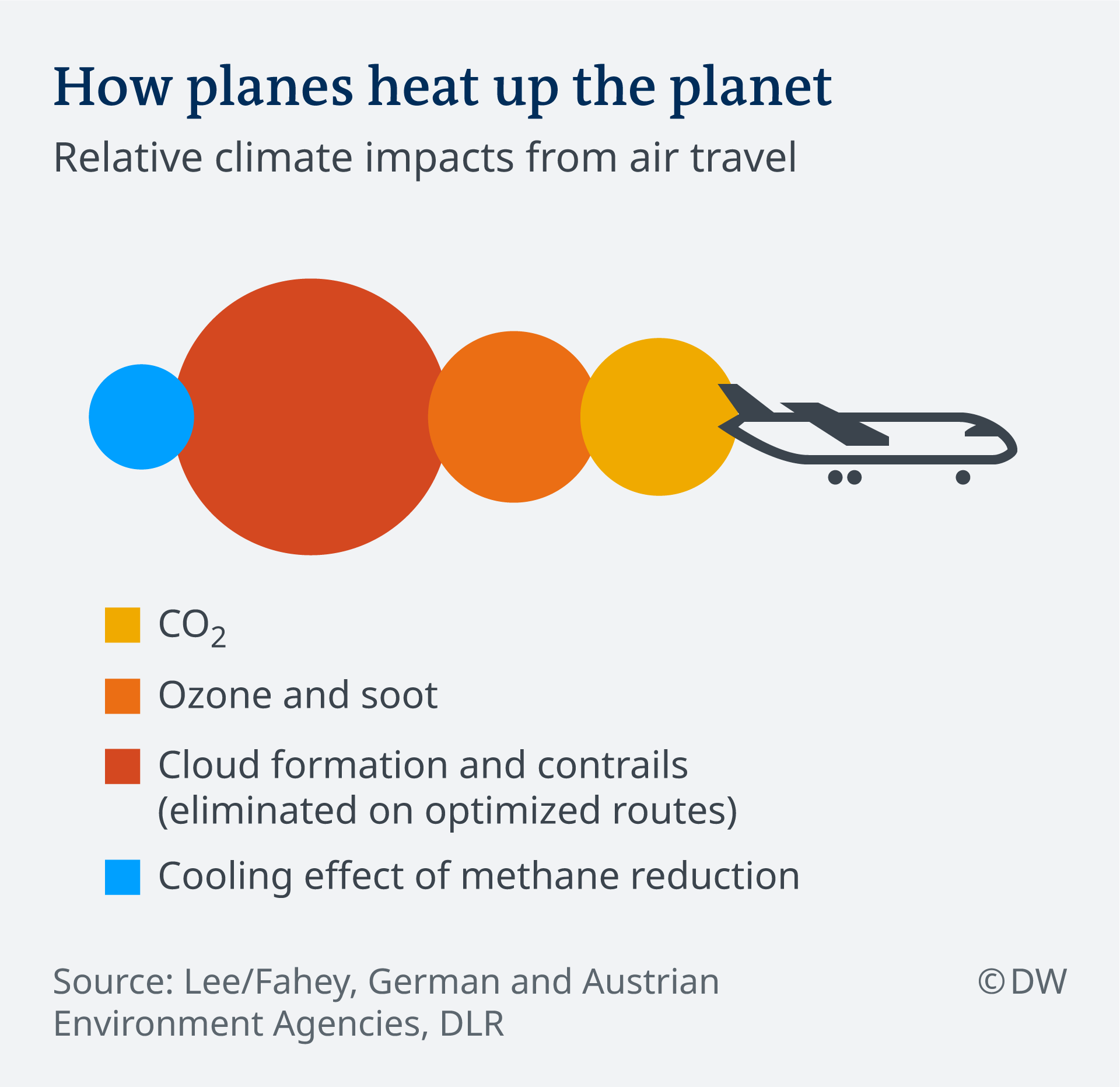 That would include measures such as flying at lower altitudes during certain times of day, or at night instead — and planning shorter routes that consume less fuel.

Working with the German Aerospace Center (DLR) and National Meteorological Service, Meilinger is developing a system to optimize routes for Lufthansa Systems.

Then again, cutting prices and offering further tax breaks seems a little counterintuitive in an industry that already benefits globally from abundant subsidies and tax breaks.

Who pays the price?

Air tickets are crazy light on the wallet — especially when you think of the heavy price the environment pays. In fact, because air fuel isn't taxed at all, flying is often the cheapest option for journeys that could just as well be taken with fewer emissions.

If the costs of environmental damage were reflected in ticket prices — for example through effective carbon pricing or heavy taxation — they would skyrocket, making buses and trains look a whole lot more attractive. 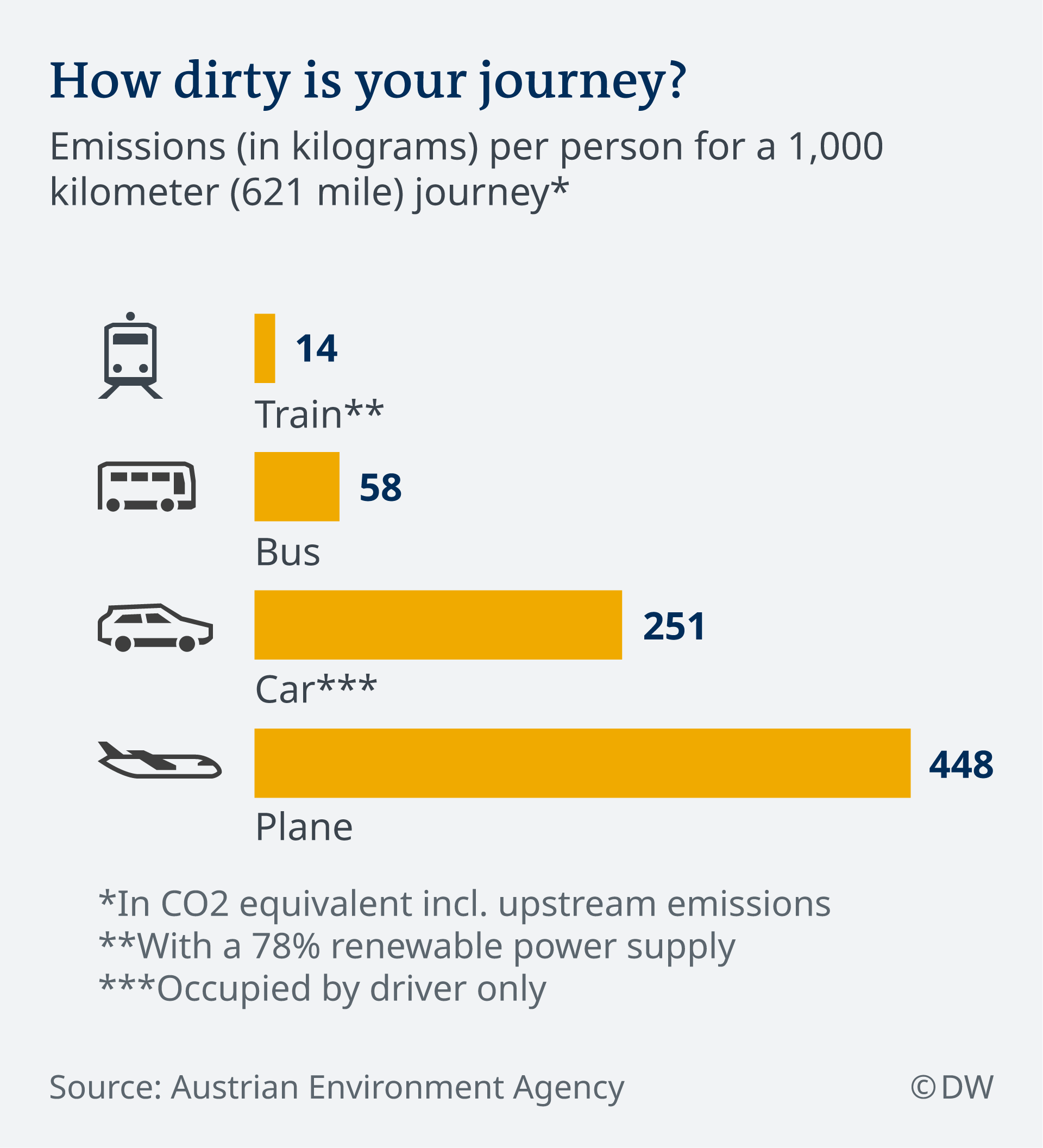 The Stay Grounded network says such cleaner options need investment, too, to improve services and help them compete against quick and dirty air travel.

Stay Grounded is also calling for a global halt to the construction of new airports; policies to promote more localized economies; and a ban on advertising, such as many countries have for tobacco products.

Arne Fellermann of Friends of the Earth Germany, which is a member of the Stay Grounded network, would like to see a national ban on short-haul flights in his country, too.

Because so far, the aviation industry has shown little sign of being ready to act on its own accord. 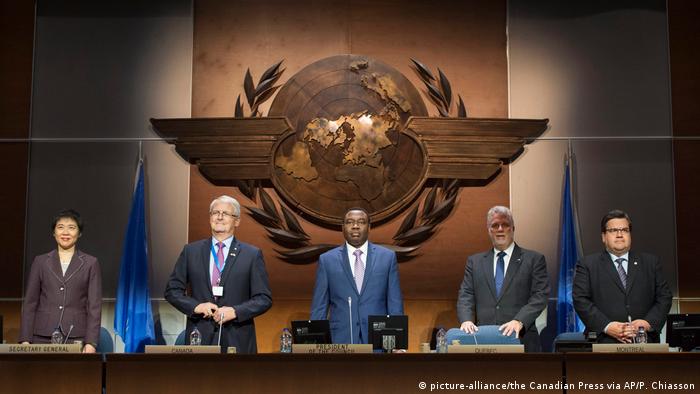 In 2016, the United Nations aviation agency ICAO launched a much-anticipated industry-wide agreement aimed at making the sector greener. Yet it contained no measures for replacing fossil fuels or reducing other greenhouse gas emissions.

Perhaps worst of all, it also assumed the industry would continue to grow unchecked.

Rather, the  industry is to begin offsetting a small share of its emissions by investing in climate protection projects under the Carbon Offsetting and Reduction Scheme for International Aviation (or CORSIA, as the agreement is called) — from 2021.

Environmental groups have admonished CORSIA as completely incompatible with the Paris Agreement. Bill Hemmings of Brussel-based thank tank Transport & Environment says it "won't save a single drop of kerosene."

For the sake of contrast, in the two years since CORSIA launched, Björn Ferry has meanwhile reduced his carbon footprint from a whopping 15 tons per year to just four.

Even without flying, Ferry realizes he is still consuming twice his technically-alotted share of the carbon budget. But he's working on bringing this down, and refuses to be defeated by the scale of the challenge.

"I don't want to be that guy who just says 'stop living,'" Ferry says. "Because the best thing for the climate is probably that you just go and hang yourself. But that cannot be the right way forward."

Instead, he sees the decisions we all make about our lifestyles — regardless of what industry does to cut emissions or politicians do to force them — as meaningful. And even the shame we're starting to feel about our climate sins is a positive sign to him.

"The norm of traveling is perhaps changing — it has to — otherwise, we have no chance to reach the goals," he says.

Researchers and their institutions should set a good low-carbon example to their communities, says Katharine Hayhoe, director of climate science at Texas Tech University. (07.03.2018)

Though air travel is more popular than ever, the vast majority of people in the world have never been on a plane. As that dynamic slowly changes, the environment stands to suffer. Is flying less the only solution? (10.01.2018)

Sunfire - The search for new fuels