Germany's far-right party, the AfD, has accused Chancellor Angela Merkel of "abusing" her office and violating the constitution. The lawsuits refer to a controversial state election earlier this year. 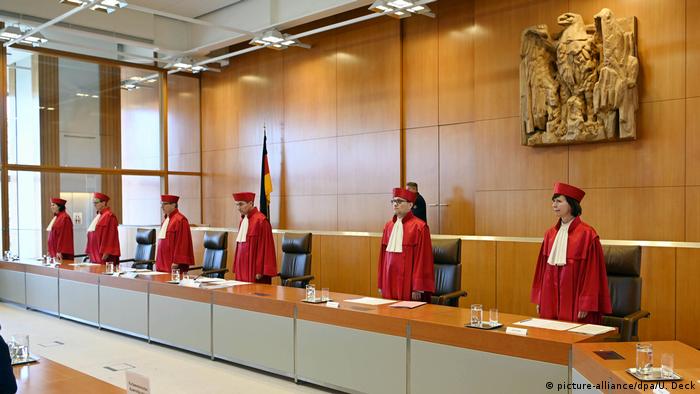 Germany's far-right party, the Alternative for Germany (AfD), filed two lawsuits with the country's Constitutional Court in Karlsruhe on Wednesday against Chancellor Angela Merkel over statements she made during a political crisis in the eastern state of Thuringia on February 5.

The crisis was sparked when Thomas Kemmerich of the business-friendly Free Democrats (FDP) was elected Thuringian state premier in a vote in the state parliament, supported by votes from both Angela Merkel's conservative Christian Democratic Union (CDU) and the AfD.

The vote triggered widespread outrage, and the result was overturned within a daywhen Kemmerich swiftly resigned.

The incident put particular pressure on the CDU, as it raised the possibility of its Thuringian branch having struck some kind of deal with the AfD, which would have contravened the party's pledge never to do so.

However, it's also possible that the AfD simply saw an opportunity to use its voting power in the state to upset the apple cart by supporting a politician from a different party without having told any other parties of its plans.

Merkel responded while on a state visit

During a state visit to South Africa the following day, Merkel called the election in the state parliament "unforgivable" and said that "the result must be reversed."

These comments are the subject of the AfD lawsuit. The far-right party has slammed Merkel for her "use of the international stage to delegitimize the results of democratic elections in Germany and to issue a coalition ban."

The AfD accused Merkel of "abusing" her office and "violating" the equal opportunities for political parties guaranteed in the German constitution.

Despite being party politicians, German ministers and chancellors are generally expected to steer clear of partisan domestic politics while on state visits or when communicating via their offices. That said, it is very common for them to be asked about developing domestic issues while on foreign trips.

The far-right party also asked the court to look at allegations that "calls to boycott the AfD" have been published by Merkel's government on its official websites.

Wednesday's lawsuits come shortly after the top court ruled in favor of a different AfD lawsuit against conservative Interior Minister Horst Seehofer for violating neutrality rules. He had published an interview on the Interior Ministry website accusing the far-right party of working to undermine the state and labeling it as being "corrosive for the state."

Although the political crisis in Thuringia was eventually resolved with a re-run of the vote in the state parliament, won by the candidate expected to win first time around, Bodo Ramelow of the Left Party, it had bitter consequences for the CDU at the regional and national level.

Christian Hirte, who was Merkel's government commissioner for the formerly communist eastern states and the deputy head of the Thuringia CDU, was fired. Hirte was informed of the decision by Merkel herself.

Soon after, CDU party leader Annegret Kramp-Karrenbauer, who until then was the most probable successor to Chancellor Merkel, also announced that she would be standing down.

This left a vacuum in CDU leadership that has been extended by the postponement of a party conference to choose Kramp-Karrenbauer's successor due to the coronavirus pandemic.