Christian Hirte — a key figure for Angela Merkel's CDU in eastern Germany — has quit over his congratulations to a lawmaker who briefly became state premier. Thomas Kemmerich won with help from the far right. 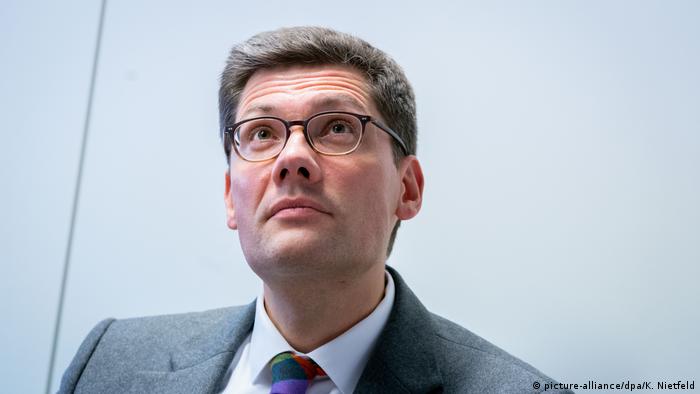 A key leader of Chancellor Angela Merkel's Christian Democrats (CDU) in eastern Germany stepped down on Saturday under pressure from the chancellor.

Christian Hirte, who was commissioner for the formerly communist eastern states in Merkel's government and the deputy head of the CDU in the state of Thuringia, stepped down following a political uproar in the region.

"Chancellor Merkel informed me during a conversation that I can no longer be commissioner for the former East ... so I asked to be dismissed," Hirte said in a statement.

Hirte was reportedly fired for having congratulated the newly elected state premier of Thuringia Thomas Kemmerich, a member of the free-market liberal Free Democratic Party (FDP).

Reporting from Erfurt, the seat of Thuringia's state assembly, the news channels ntv and RTL said CDU regional chief Mike Mohring had told his prasidium that he intended to go on a skiing holiday.

Kemmerich was at the center of a major political upset on Wednesday when he beat incumbent Bodo Ramelow of the Left party by a single vote from Thuringian lawmakers. The Left party had emerged as the most popular party in regional elections last October, and had spent months crafting a coalition deal with the center-left Social Democrats (SPD) and Green party.

The proposed coalition agreement was signed on Tuesday, paving the way for Wednesday's vote for premier, which Ramelow was expected to win easily. However, the far-right Alternative for Germany (AfD) shocked all of Germany when it voted for Kemmerich instead of its own independent candidate. With support from his own party and the CDU, which has often formed coalitions with the FDP, Kemmerich received 45 votes to Ramelow's 44.

The condemnation of the process was swift and loud, with the Left party accusing the FDP of getting into bed with "fascists" and many high-profile politicians in Germany decrying the election of a state premier with the explicit help of the ethno-nationalist AfD, which is openly xenophobic, Islamophobic and anti-LGBT.

These critics included Chancellor Merkel, who accused the CDU in Thuringia of abandoning the "values" of the party, although it was not clear if the regional CDU lawmakers knew ahead of time that the AfD would also vote for Kemmerich.

Spontaneous protests immediately cropped outside the parliament building in the state capital Erfurt and in front of the FDP's federal headquarters in Berlin.

Kemmerich was also slammed for accepting a congratulatory handshake from Björn Höcke, an AfD spokesman who has been tied to several anti-Semitic scandals.

It was further noted that Kemmerich's election was inappropriate due to the fact that the FDP barely cleared the 5% support hurdle needed to enter the regional parliament. Kemmerich announced his resignation following the outcry.

As for Hirte, he landed in hot water after being one of the first to congratulate Kemmerich on his election, despite his getting there with the support of the AfD, considered a no-go area for the CDU, which has consistently refused to work with the far right.

The SPD, which rules in Berlin in a coalition with the CDU, are reportedly the ones who told Merkel that Hirte needed to be fired. They have accused the Christian Democrats in Thuringia of knowing that the AfD would vote for Kemmerich.

Chancellor Angela Merkel's party struggled to find a way to avoid new elections — and calm a political uproar — after it allied with the far-right AfD to elect a state premier. But other parties may not play along. (07.02.2020)