Chancellor Angela Merkel's party struggled to find a way to avoid new elections — and calm a political uproar — after it allied with the far-right AfD to elect a state premier. But other parties may not play along. 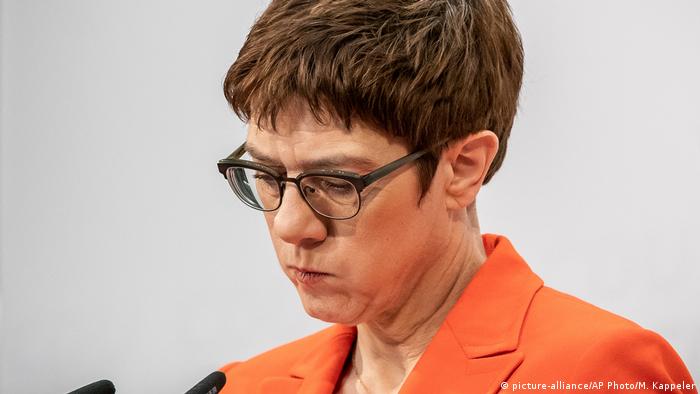 Party leaders from Germany's Christian Democratic Union (CDU) gathered in Berlin on Friday for the third day of meetings, as the party experiences a crisis of conscience following an election debacle in the eastern state of Thuringia.

CDU leader Annegret Kramp-Karrenbauer, who took the reins from Chancellor Angela Merkel in 2018, said Friday after the meeting that it was still the case for the CDU in Germany and Thuringia that there "will be no cooperation with AfD, either directly or indirectly.''

"The CDU in Thuringia supported this candidate against our clear recommendation, although it should have been obvious that it was an opportunity for the AfD," said Kramp-Karrenbauer.

On Wednesday, CDU members in Thuringia shocked the party — and much of Germany — by allying themselves with the far-right Alternative für Deutschland (AfD) to help elect Thomas Kemmerich, a candidate from the pro-business Free Democrats (FDP), as the state's premier.

Who holds the CDU reins?

Now many in Germany are questioning whether Kramp-Karrenbauer has the party under control.

"Kramp-Karrenbauer's authority looks to be in tatters at the moment. And local party leadership continues to defy orders," said DW's chief political correspondent Melinda Crane, adding that Mike Mohring, head of Thuringia's CDU, seemed determined to block new elections over concern that the CDU could lose even more votes.

"The consequences are very real for the CDU party leadership in Berlin, with junior coalition partner the Social Democrats questioning whether the CDU's leadership is in a position to control members of its own party," said Crane.

Following a political an uproar and protests on the streets of Erfurt, the capital of Thuringia, Kemmerich said he would step down and call new elections.

It appears, however, that he will remain in office during a transition period until a new leader is chosen.

The FDP has the fewest seats in Thuringia's parliament and Kemmerich was only elected with CDU and AfD support.

The fractured political landscape in Thuringia following the October 2019 elections complicates forming a governing coalition. The state has yet to form a government.

The Left and the AfD finished first and second, respectively, in the election while the CDU placed third. As with the AfD, the CDU has said it will not ally with the Left party.

Kramp-Karrenbauer said Friday that if "stable conditions" cannot be restored in Thuringia's parliament, then new elections would be "unavoidable."

She called on Greens and Social Democrats to work together and field their own candidate who "will not divide the state."

The Greens leader in Thuringia quickly rejected the idea, and said the CDU chief was "not in the position to hand out suggestions or orders," Germany's DPA news agency reported.