Ruling parties in Germany performed badly in the recent EU vote, prompting speculation that Angela Merkel's government could fall. A new opinion poll shows Germans want the CSU/CDU and the SPD to stay together. 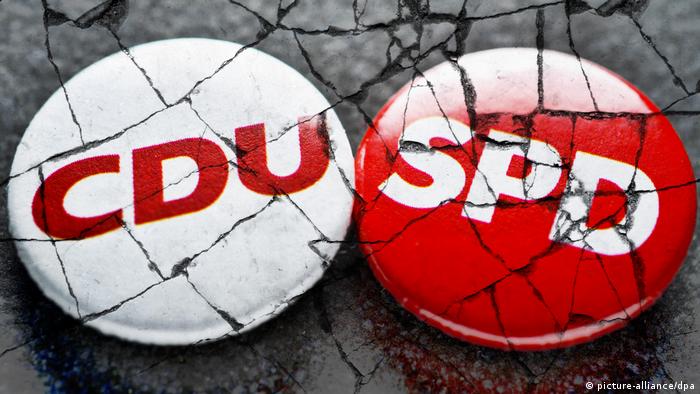 Germany's grand coalition is increasingly wobbly, but most Germans want it to stay in power until 2021, a survey published on Monday showed.

Chancellor Angela Merkel is currently relying on the support of the coalition comprised of her own conservative CDU, its CSU sister party from Bavaria and the center-left SPD while serving her fourth, and presumably last, term as chancellor.

According to a Trendbarometer poll published by Germany's private RTL and n-tv broadcasters, only one-third of participants want the coalition to end. In turn, 59% of respondents believe the parties should "pull together and rule until the end of the term." The remaining 8% said they did not know the best course of action.

Read more: What you need to know about German political parties

While the opposition Green party scored major gains in the European election last month, only 40% of its voters believe the coalition comprised of their rival parties should end. Even among the members of the Left party, just 49% wanted the grand coalition to break up. The pro-business FDP voters were even more strongly in favor of keeping the coalition in place — only 38% said the alliance should end.

SPD in crisis, government at stake

If the coalition were to fall apart, a majority of 53% of respondents believe the best option would then be to hold fresh elections. Less than one-quarter of participants prefer a reshuffle to forge a new coalition of Merkel's CDU/CSU, the Greens and the FDP. Among FDP voters, 54% would be in favor, but only 16% of Green voters were ready to accept this arrangement.

The recent European Parliament elections saw the ruling parties perform below expectations. This is an especially severe problem for the center-left SPD, which has been bleeding support for years, even before entering the latest Merkel-led government.

The SPD has spent 10 years of Merkel's nearly 14-year-long term in office in grand coalitions, enabling the rule of their CDU rivals. The tactic has alienated large parts of its base, leading many of its voters to support other parties.

Following the poor showing in the EU polls, SPD leader Andrea Nahles stepped down. The SPD is currently in the process of finding a new party head. Many observers believe a new leader will take the party out of the cabinet in an attempt to reassert its political identity.