Berlin-based eco.carbon has developed a new material that could be used to soak up oil from spills like the tanker disaster in Spain last week. But the product hasn't yet been tested on a wide scale. 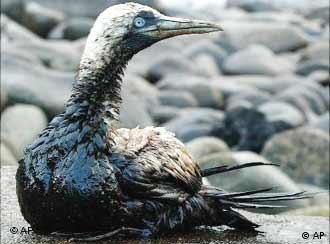 On Nov. 19, the oil tanker "Prestige" broke apart and sank 250 kilometers off the coast of northern Spain. More than 70,000 metric tons of heavy oil threatens to leak into the Atlantic and cause an environmental catastrophe and creating an enormous toxic mess to clean up.

The most common method of cleaning up after an oil spill is to erect barriers in the water and skim off the oil by hand. But that only works in very calm seas. British crews employ chemical cleaning agents, which are dropped from airplanes or boats directly onto the spill. The oil then breaks down into tiny droplets, but the chemicals remain in the water and can kill fish and other marine life.

Enter eco.carbon, a Berlin-based company that has developed an alternative method for cleaning up oil spills. Eco.carbon has invented a giant sponge made of lignite resin that sucks up the oil, preventing it from harming the environment. But that invention has yet to be tested under real conditions.

The mats have so far withstood small-scale testing in pools of water with miniature oil slicks.

The Berlin inventors have sold their invention mainly to disaster control teams and firefighters. The scientists have a lot of confidence in their wonder weapon.

"We figure that you'd need about 100 mats to collect a ton of oil from water," says eco.carbon's Andreas Jonas. "The number of mats you need isn't determined by the size of the oil slick, but by the amount of oil spilled. The mats don't have to completely cover the oil spill."

A unique advantage is that once the oil is absorbed into the mat, it remains fixed there permanently. The downside, however, is that the mats become toxic waste. Even so, the inventors are convinced that their product will be a success -- even on the high seas.

"The mats were tested for their effectiveness in water and we also tested to make sure that mats saturated with oil remained afloat for several days," Jonas says. "We don't think that the mats will go under in rough seas and that they will be able to stand up against huge waves."

That would make using the mats more effective than clean-up methods currently in use and at just a third of the cost.

"To make the most effective use of the mats, large quantities would have to be able to reach the disaster scene, for example stranded ships, as quickly as possible," says Jonas. "So it would be important for coast guards to maintain a supply of mats. That is, depots should be set up along coastlines that are especially threatened so that the mats are readily available."

But the scientists at eco.carbon are also trying to improve other methods to fight oil spills. At the scenes of oil spills around the world, they've found bacteria that seem to have an appetite for the toxic black sludge. Now, the scientists are breeding the bacteria.

The scientists are studying the different bacteria to determine which is most effective at reducing oil levels. Eventually, the hope to put the best bacteria to work in helping clean up after oil spill disasters.

But all of these efforts can't prevent the devastating environmental damage caused by the tanker accident. If the Prestige were now to lose the remaining 65,000 tons of its cargo, little could be done to prevent the environmental catastrophe awaiting the Spanish coastline.