Germany's Vice Chancellor Sigmar Gabriel has met with anti-Islam supporters in Dresden. Meanwhile, thousands of anti-racism demonstrators have turned out to rally against the PEGIDA movement. 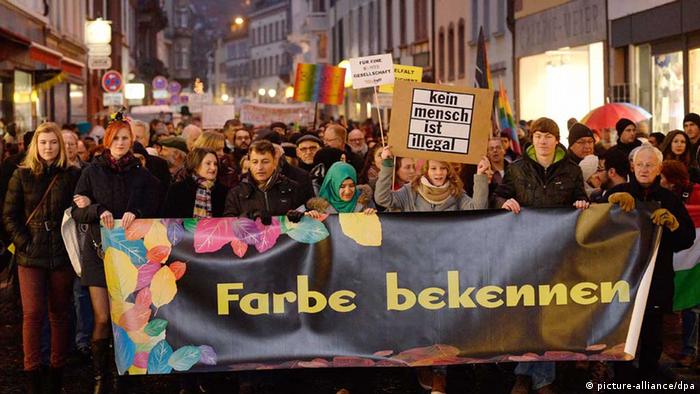 Sigmar Gabriel, Germany's vice chancellor and a member of the Social Democratic Party, had been invited to attend a lecture at the Center for Civic Education in Dresden when he had an unexpected meeting with members of the anti-Islam PEGIDA group.

Gabriel said he was there in a private capacity to listen to the lecture. More than 200 people, including PEDIGA supports and the group's critics, also attended.

Following the presentation, Gabriel participated in discussions for about an hour with the PEGIDA supporters. "What's not better in a democracy than talking to each other," he told German news channel N-24.

German politicians have struggled for months with how to react to PEGIDA members, their demands and rallies that have been held across the country.

Views within Gabriel's SPD range from some calling to engage in discussions with PEGIDA supporters to others who say participating in such events would send the wrong signal to the general public.

Meanwhile, around 20,000 people gathered on Friday evening in the southern German city of Freiburg to demonstrate against racism and xenophobia.

Friday's event was the first major rally in the city against the PEGIDA group.

Among the speakers at the rally were Freiburg Mayor Dieter Salomon, from the Greens political party, and Freiburg University President Hans-Jochen Schiewer.

PEGIDA, whose name translates as "Patriotic Europeans Against the Islamization of the West or Occident," purports to be campaigning against what it claims to be an undue influence of Islam in European society.

The group, which has organized protests in Dresden on most Mondays since October, plans another demonstration, but on Sunday, and has said it expects 25,000 people to turn out.

To counter PEGIDA, a municipally funded free rock concert is planned outside Dresden's iconic Frauenkirche for Monday evening, with the motto, "Open and Varied:
Dresden for All."

PEGIDA initially wanted to demonstrate last Monday, but that rally was called off, saying threats had been made against its main organizer, Lutz Bachmann.

Bachmann resigned as organizer on Wednesday after a photo of him impersonating Adolf Hitler was published in the mass-market Bild newspaper.

Opinion: The time has come to promote democracy

The head of PEGIDA, a German movement critical of Islam, has resigned, and fewer people show up for the group's weekly demonstrations. But it won't just go away, DW's Richard Fuchs says: This where the real work starts. (22.01.2015)

Schmidinger: 'PEGIDA will fizzle out,' but anti-Islam mood worrying

Ructions within Germany's PEGIDA movement will likely lead to its swift demise, but it won't put a stop to a general anti-Islamic mood in Europe, also among its elites, political scientist Thomas Schmidinger told DW. (22.01.2015)

PEGIDA filters through to Denmark