The PEGIDA movement faces a shake up after a turbulent week. The embarrassing departure of its founder over a Hitler photo as well as intense media scrutiny of the group's xenophobic tendencies are behind the crisis. 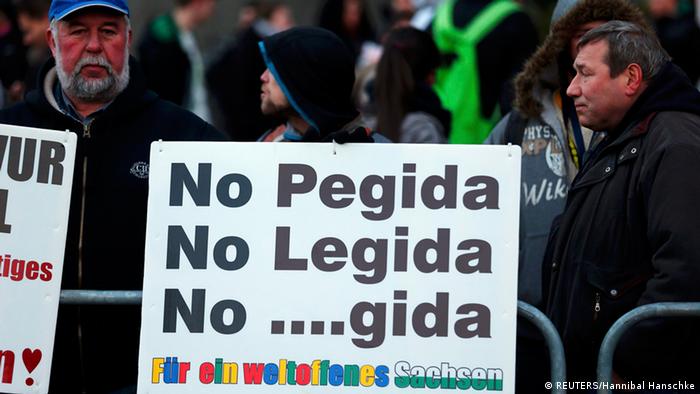 The leadership of PEGIDA faced the task of recovering from damaging allegations and alliances which culminated with the departure of its leader, Lutz Bachmann, and, separately, an attempt by the group to bring a lawsuit against its supporters in the eastern German city of Leipzig.

Many opponents of the protest movement are wary of its political goals, in view of participants at demonstrations openly displaying anti-mass-immigration and anti-Islamization signs. Nevertheless, PEGIDA organizers have denied extremist views and maintained it is neither afraid of foreigners nor of Muslims. 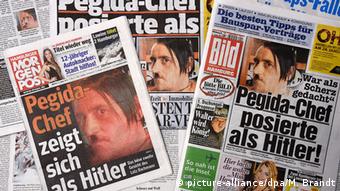 But on Wednesday, PEGIDA sustained a major blow when the mass circulation newspaper Bild published a two-year old photo of its founder and leader Bachmann with a mustache and hair style reminiscent of Adolf Hitler.

"Anyone in politics who poses as Hitler is either a total idiot or a Nazi," Deputy Chancellor Sigmar Gabriel told the Bild newspaper.

Bachmann, however, dismissed the picture as an "imprudent" joke, but was still forced to resign when it was discovered that he had used the words "scumbag" and "animal" to describe asylum seekers. Bachmann later apologized for his comments about foreigners.

"I earnestly apologize to all citizens, who felt attacked by my postings," Bachmann said in a Facebook post. "They were ill-considered comments that I wouldn't make in this way today."

Prosecutors in Dresden have said they are investigating leveling charges at Bachmann.

The group, whose name is an acronym for "Patriotic European Against the Islamization of the West," has said it is against what it perceives as a growing influence of Islam in Europe.

The Dresden-based group sought to distance itself from supporters in Leipzig, known as LEGIDA, ahead of a mass rally on Wednesday night. 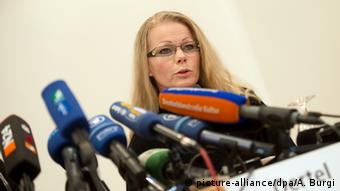 PEGIDA spokesperson Katrin Oertel announced that the group was considering action for an injunction after its supporters in Leipzig refused to sign PEGIDA's 19-point plan.

"Everything that's being said and called for tonight in Leipzig wasn't discussed with us," she said. "That can prove counterproductive to the perception of our movement as a whole."

PEGIDA has faced intense scrutiny by the German media over the views of its demonstrators, none of the points on its 19-point manifesto are explicitly racist or xenophobic. By contrast, the LEGIDA rally on Wednesday night drew thousands of right-wing extremists from other cities. Some demonstrators were described as "aggressive" by Leipzig's city spokesperson, Matthias Hasberg.

The cancellation of Dresden's weekly Monday rally over a terrorist threat was expected to cause a larger influx into Leipzig on Wednesday night. Protest organizers in Leipzig, which lies 115 kilometers (71 miles) to Dresden's northwest, had expected 100,000 people to march.

Actual turnout in Leipzig, however, was far below the estimates. According to police figures, some 15,000 rallied in support of LEGIDA and roughly 20,000 people marched in counterdemonstrations. 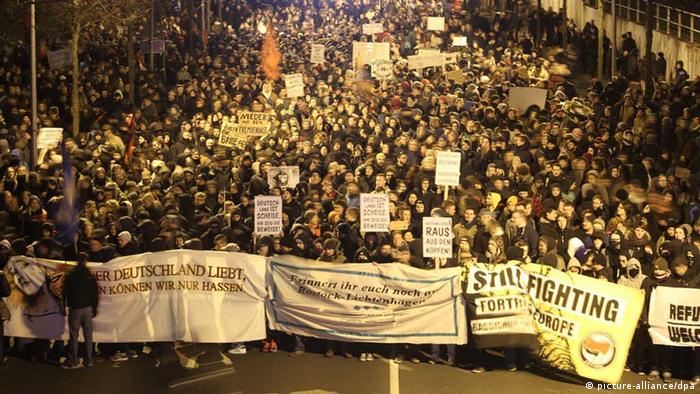 PEGIDA-inspired protests across Germany since last year have remained largely peaceful, but on Wednesday, the Leipzig demonstrations were marked by unrest.

Police later reported having to restrain counter-demonstrators from interfering with the LEGIDA march. By roughly 10 p.m. local time (2100 UTC), clashes had broken out between both sides in front of the central train station.

Authorities and journalists reported several injuries, including from members of the press. It was not immediately clear who was behind the attacks.

There were also reports protesters lobbing bottles and shooting fireworks at rivals and at the police.

The persistence of the PEGIDA movement - enhanced by the Charlie Hebdo terrorist attacks in Paris and police raids in Belgium and Germany - has raised concerns among the country's politicians over intolerance and hatred against outsiders.

In Thursday's Mitteldeutsche Zeitung, German Left politician Sahra Wagenknecht called for politicians to end their avoidance of dialogue with PEGIDA and to engage with its supporters.

PEGIDA supporters needed to be shown that the group was steering "the protest into exactly the wrong direction," she said, emphasizing that PEGIDA's leaders would not be invited for talks because they were stoking racism-driven fears.

"Polarization undermines what has kept our country stable and predictable and what trust among the people created," Gauck said.