"Anti-Islamization" protesters have gathered for a rally in the city of Leipzig, blocked by thousands of counter-demonstrators. A large contingent of riot police were called in to separate the two. 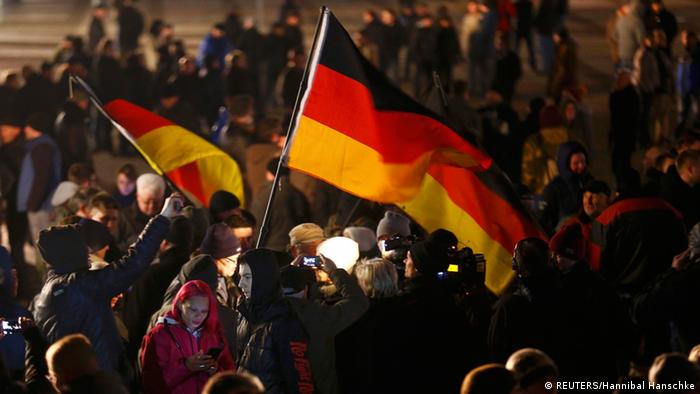 LEGIDA's rally got underway on Wednesday evening with the organizers hoping to attract tens of thousands of supporters, although many faced difficulty reaching their destination.

According to the DPA news agency, only a fraction of the anticipated number had reached the Augustusplatz - the city's largest square - by early evening. Counter-demonstrators blocked the way in surrounding streets, chanting the refrain "Get lost!" and brandishing signs reading "No PEGIDA, No LEGIDA."

LEGIDA is the Leipzig offshoot of the PEGIDA group centered around Dresden, whose name loosely translates as "Patriotic Europeans Against the Islamization of the West."

An AFP reporter said that she saw small groups of LEGIDA supporters, as well as individuals, escorted to the main rallying point by police. A total of 4,000 police officers were deployed to patrol both protests and maintiain a barrier between the two. 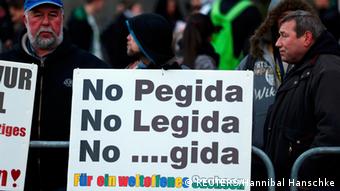 The counterdemonstrators were out in force, brandishing placards opposing the movement

A number of businesses in the city center were said to have closed early, ahead of the demos.

Officials switched off evening lighting to some of the city's most prominent buildings as the march got underway. Leipzig's City Hochhaus - the city's tallest building also known locally and the "wisdom tooth" - was in darkness, as was the Leipzig Gewandhaus concert hall.

The marchers' original planned route was on Wednesday morning curtailed on security grounds. Bus and tram services through the center were also canceled.

Ahead of the march, authorities said they expected PEGIDA sympathizers to mobilize about 40,000 people in the Leipzig demo under the banner LEGIDA. At least 19 organized counter demonstrations in the city were expected to garner about 60,000.

The LEGIDA march comes two days after PEGIDA's weekly rally in Dresden was canceled because of Islamist death threats against controversial founder Lutz Bachmann. The rally drew a record 25,000 marchers when it was staged last week, with attendances having shown a gradual increase since the protests began in October.

Bachmann on Wednesday evening quit as leader of PEGIDA after a photograph emerged of him posing with a Hitler mustache and hairstyle.