The founder of the PEGIDA movement has stepped down, following a furore over an image of him on Facebook sporting a Hitler-style toothbrush mustache. Lutz Bachmann had at first tried to laugh off the image as a joke. 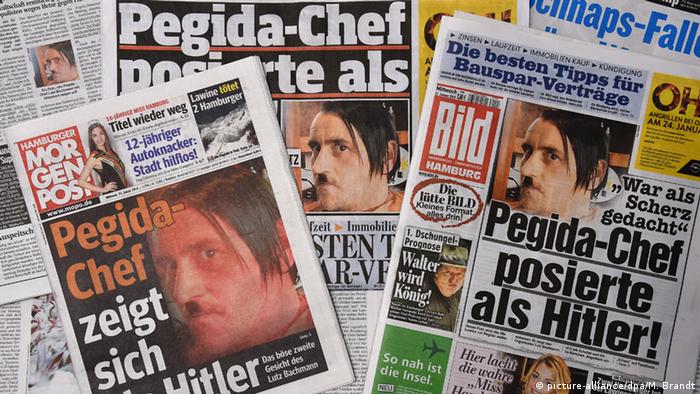 Lutz Bachmann, the founder and co-leader of the PEGIDA organization in Germany, announced on Wednesday evening that he was quitting his post.

PEGIDA's Kathrin Oertel told news agencies that Bachmann was stepping back from his roles in the group opposing what it calls the "Islamization of the West." Bachmann then told mass-circulation daily Bild - the same paper that had published the two-year-old image of him wearing a toothbrush mustache in the style of Adolf Hitler: "Yes, I am also resigning as chairman [of PEGIDA]."

In the picture, Bachmann wears a mustache and a severe side parting reminiscent of the German dictator. At first, he claimed that the picture was a joke.

However, PEGIDA on Wednesday said that Bachmann's real error had been making comments on Facebook - calling asylum seekers in welfare offices "scumbags" and "animals" - rather than the posting of the picture.

Bachmann himself issued an apology over the nature of those posts. "I am sorry that I have damaged the interests of our movement in this way," said Bachmann. "I sincerely apologize to all citizens who feel offended by my posts," said Bachmann."They were imprudent remarks that I would not make today."

Bild quoted Bachmann saying he posted the Hitler picture to coincide with the 2012 audiobook release of a satirical book that imagined the dictator coming back to life in modern-day Germany. "One has to be able to make fun of oneself," Bachmann was cited as saying.

'Either an idiot or a Nazi'

After Bild's publication of the picture, PEGIDA - which has staged a series of increasingly popular rallies in the eastern city of Dresden - said its leadership was meeting to discuss the matter. Organizer Rene Jahn said the incident had been "unacceptable."

"There's no dealing with something like that," said Jahn. "This is about an entire movement and not just one person."

The photo's appearance was seized upon by parliamentarians. "Anyone involved in politics who masquerades as Hitler is either something of an idiot, or a Nazi," said Germany's deputy chancellor, Sigmar Gabriel of the center-left Social Democrats. 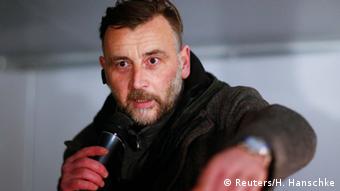 PEGIDA's "anti-Islamization" Dresden demonstrations have become increasingly popular over the past three months, with similar rallies being staged in other German cities.

Leftist politicians claimed it was a case of PEGIDA - which has sought to portray itself as not being xenophobic - revealing its true colors.

"The wolf has finally lost his sheep's clothing," said Ulla Jelpke, a member of Germany's Left party in the Bundestag.

On Wednesday, German prosecutors opened an investigation into the comments allegedly made by Bachmann via Facebook.

The Dresdener Morgenpost newspaper quoted what it said were social media messages from Bachmann saying asylum seekers acted like "scumbags" at welfare offices. The comments went on to say extra security was needed "to protect employees from the animals."

Bachmann last week played down a ribald comment made in 2013, that "eco-terrorist" Greens - first and foremost former Green party leader Claudia Roth - should be "summarily executed."

"In that moment it was wrong," said Bachmann. "I regret I didn't resist my impulsiveness."

An estimated 100,000 people - both for and against PEGIDA - were expected to rally in the eastern city of Leipzig on Wednesday evening. The movement itself was expected to gather some 40,000 supporters, while around 19 organized counter-demonstrations were hoping to muster up to 60,000.

A demonstration by PEGIDA in Dresden on Monday was canceled by police because of an Islamist death threat against Bachmann.

"Anti-Islamization" protesters have gathered for a rally in the city of Leipzig, blocked by thousands of counter-demonstrators. A large contingent of riot police were called in to separate the two.