Turkish Interior Minister Suleyman Soylu has threatened to arrest German "terrorists" and "traitors" at airports. In response, the German government reiterated warnings about travel to Turkey. 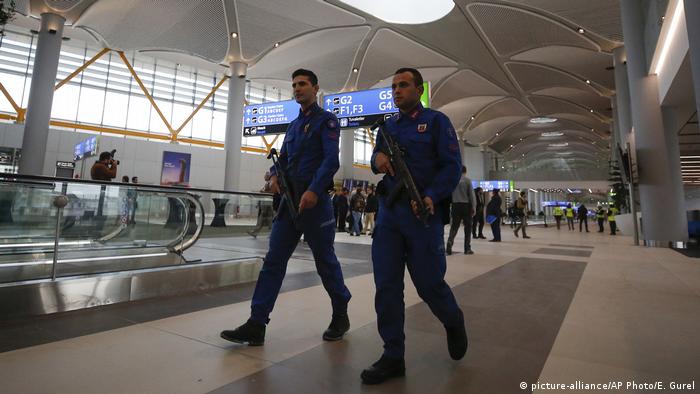 The German government criticized Turkey on Wednesday after the Turkish interior minister threatened to arrest "terrorists" and "traitors" from Germany arriving at Turkish airports.

The statement from Interior Minister Suleyman Soylu was "not helpful in the current situation," Foreign Office spokesperson Maria Adebahr said in Berlin.

According to Turkish media, Soylu told an election campaign rally on Sunday that people in Europe and Germany who attend "terrorist organization" rallies would be arrested in Turkey.

"In Germany, in Europe, there are those who attend terrorist organization events then go on vacation in Antalya, Bodrum and Mugla," Soylu said, referring to Turkish resort towns. "Now we've taken action against them.

"All right then, let them come and go to prison directly from the airport. Being in prison isn't so easy. From now on it won't be easy to commit treason abroad then come to Turkey for fun and good times," he told supporters.

Soylu's comments were aimed at supporters of the Kurdistan Workers' Party (PKK), which Turkey, the EU and United States lists as a terrorist organization.

Germany has one of the largest Kurdish diasporas in the world and supporters of the PKK regularly hold rallies in support of Kurdish causes.

However, Turkey considers a number of organizations that are legal in Germany as terrorist organizations, including the Gulen movement Ankara blames for orchestrating a failed 2016 coup attempt.

Over the past several years, ties between Berlin and Ankara have been strained over the arrest of dual nationals, including journalists and human rights activists. Many have been detained on trumped-up terrorism propaganda charges.

It is obvious that the interior minister's statement was "intentionally taken out of context and distorted," Turkish Foreign Ministry spokesperson Hami Aksoy said.

He went on to assure German tourists that they would be "greeted with traditional Turkish hospitality."

Adebahr warned Germans to look at the foreign office's travel warnings and safety information, which clearly "point to the risk of arrest," especially when there exists any connection "to terrorist organizations under Turkish interpretations."

"Statements that are covered in Germany by freedom of expression can lead to prosecution in Turkey," Adebahr warned.

After Russians, Germans were the second largest tourist group visiting Turkey in 2018.

Two German journalists are unable to work in Turkey after the government denied them official accreditation. An editor at Germany's ZDF public broadcaster called the move "incomprehensible." (01.03.2019)