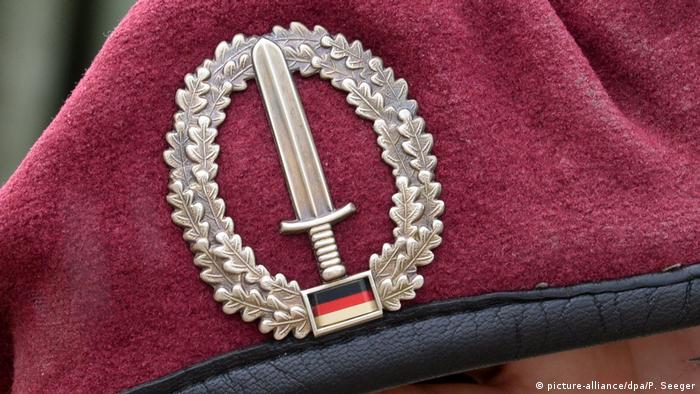 It's set all the alarm bells ringing: Parts of the German army's elite Special Forces Commando (KSK) have shown right-wing extremist tendencies. This at a time of growing fears about far-right political violence, even the possibility of political murder. Defense Minister Annegret Kramp-Karrenbauer's response was too long in coming.

The minister spoke of an "unhealthy sense of elitism," also among those in positions of responsibility – a "toxic leadership." This is shocking: People who have observed the German army closely and critically for years say "one could not have imagined such a thing."

And the shock is certainly intensified by the fact that KSK ammunition has gone missing — and not just a few bullets. At present they're talking about 85,000 rounds of ammunition and 62 kilos of explosives.

Every missing round is one too many

Every few weeks Germany hears reports about lists of names of "undesirables", which are said to be circulating in right-wing extremist networks. Sometimes the names are said to belong to politicians, sometimes journalists, sometimes representatives of the Jewish or Muslim communities or of civil society.

Earlier this week, it was reported that the names of leading politicians from both the governing coalition and the opposition, including some ministers, appeared on one of these lists — along with their private addresses and phone numbers.

In a threating situation like this, 85,000 missing rounds of ammunition are 85,000 too many. Even Germany's most senior soldier, the Inspector General of the Bundeswehr Eberhard Zorn, has said that material like this could be used, for example, in an assassination attempt.

The information that has now come to light touches on the essence not only of the elite unit but of the Bundeswehr as a whole. It also raises doubts as to whether the suspension of conscription in mid-2011, which was welcomed by almost all politicians at the time, was really such a sensible idea.

Just a few years after its foundation, and in the light of the terrible history of the Third Reich, the Federal Republic of Germany established new armed forces that were committed to democracy and human rights. Since then, the talk has always been of "citizens in uniform", a special culture, so-called "inner leadership."

"Inner leadership" doesn't exist in this form in any other army. It refers to the responsibility of each individual in the troop, and the individual's loyalty to the constitution. The principle applies to all branches of the armed forces, including the KSK, which was established in 1996. It is a responsibility incumbent not only on senior officers and superiors, but on every soldier of every rank: Anyone who observes a negative development is required to speak up.

So now, when Kramp-Karrenbauer talks about a "wall of silence" and people keeping quiet, it means that this core principle of German soldiership has failed. This is true of those in positions of responsibility within the units themselves, and it is true of the supervisory authority. It is also true, incidentally, of the churches' military chaplaincy.

Because KSK deployments abroad can always be a matter of life and death, both Catholic and Protestant clergy accompanied the unit's forces in Afghanistan. Living and working in such close proximity, did they really notice nothing?

The minister says the KSK is now "on parole," and is being given a last chance. Those in charge have until October to conduct further investigations, make decisions, and dismiss people.

However, it should be remembered that the Bundeswehr is — and Germany is proud of this — a parliamentary army. Only the Bundestag can send German soldiers on missions. Right now, parliament must be surprised, and not only by the shocking news of right-wing extremism. Many politicians are also angry that, in the current situation, the media were briefed before the information reached members of parliament. This is highly unusual.

Right now, it's hard to know whether the period between now and the October deadline represents a grace period, or simply time added on.

US, Taiwan to start formal trade talks in autumn 44m ago

Opinion: Olaf Scholz should have shut down Mahmoud Abbas — he failed 16h ago