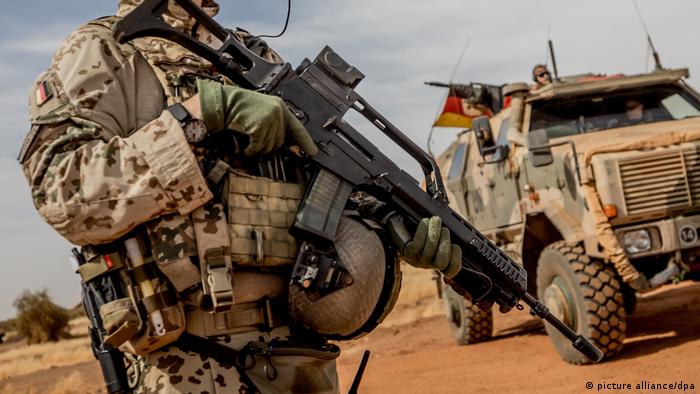 Germany's parliament on Friday extended its mandate for the country's troops deployed with the European Union Training Mission in Mali (EUTM).

A sizeable majority of 437 MPs supported the extension of the Bundeswehr's directive until May 2021.

Opposed were 149 German parliamentarians, while 58 abstained as signaled beforehand by the environmentalist Greens.

Greens foreign policy spokesman Frithjof Schmidt had already warned that a German expansion risked "dealing with authoritarian governments and a dictatorship like in Chad."

EUTM, hampered by a Covid-19 outbreak since April, has been allocated up to 450 German troops — 100 more than before — to instruct Malian soldiers, establish a new training center in central Mali, as well as training recruits of other Sahel nations. German combat divers will also train special forces personnel in Niger.

The EU assignment is operating alongside the 13,000-strong UN multinational mission in the West African country.

The coronavirus and Africa's environment

Appealing for the extension of the mandate, Johann Wadephul, deputy leader of Chancellor Angela Merkel's conservative parliamentarians, described the situation across the vast Sahel — including Mali, Burkina Faso, Niger, Chad and Mauritanian — as "very acute."

Attacks by terror groups had become "increasingly complex" and "more and more regions" were close to falling into their hands, Wadephul told the Bundestag, adding: "we must do something and we must do it properly."

Germany is also involved in MINUSMA, with up to 1,100 German soldiers mandated, which comprises almost 12,000 multinational Blue Helmets and 1,744 police officers.

Since it took over from a West African force in 2013, MINUSMA has lost more than 200 soldiers, including more than 100 killed in hostile action.

The opposition far-right Alternative for Germany (AfD) demanded that Germany terminate its involvement in both missions, saying no progress was identifiable.

Local officials said those killed — allegedly by armed jihadists on motorcycles — were either shot or burned to death.

Mali has been in chaos since 2012, when al Qaeda-linked jihadists seized the northern two-thirds of the country, prompting a French intervention, now numbering 4,500 troops in Operation Barkhane. It's spearheaded by Task Force Sabre, comprising elite French special forces.

EUTM, currently under Portuguese command, comprises soldiers from most European nations and had its budget almost doubled in 2018 to €60 million ($66 million) to train G5 Sahel forces.

Since 2013, some 15 000 Malian soldiers have gone through EUTM training, mainly at Koulikoro, a town alongside the Niger River, 60 kilometers (37 miles) downstream of Mali's capital Bamako.

Germany is currently engaged in 12 multinational operations abroad on three continents, involving some 4,000 solders, including Afghanistan and Lebanon.

Human rights groups say children in conflict regions aren't receiving enough support. Children who have escaped from Boko Haram are treated with suspicion in Nigeria, while schools are closing in Burkina Faso. (27.05.2020)

As Mali gets hotter and drier, local mayors and lawmakers are learning how they can teach others how to adapt to climate change. (03.12.2019)

Malians head to the polls on Sunday for the second round of parliamentary elections. Amid fears of COVID-19 and security threats, turnout is expected to be even lower than in the first round. (18.04.2020)

A roadside bomb in northern Mali has killed three UN troops. Four other peacekeepers from Chad were wounded. Some 13,000 troops are deployed across the arid nation to deter jihadists. (11.05.2020)