A police search of an elite German soldier's property turned up a cache of weapons and explosives. Separately, a top court confirmed a 7-year sentence for an ex-"Mr. Germany" who shot and wounded an officer in 2016. 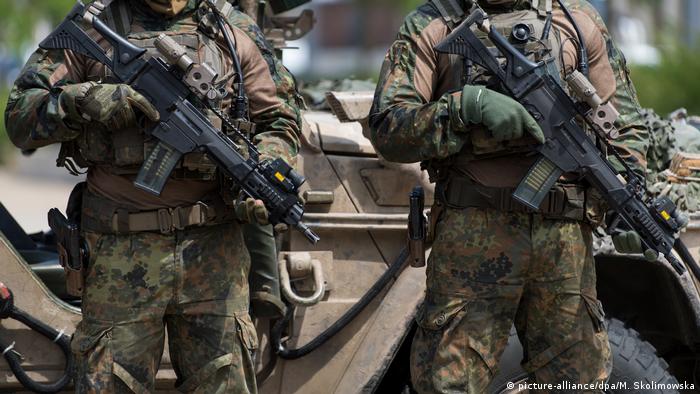 An elite soldier assigned to the Bundeswehr's Special Forces Command (KSK) was being investigated for breaching Germany's weapons control law, according to the dpa news agency.

Weapons and explosives were found on the soldier's private property in the eastern German state of Saxony, dpa reported, providing few initial details about the investigation.

"Anyone, who is observed acting radically in the Bundeswehr has no place in our armed forces," responded German Defense Minister Annegret Kramp-Karrenbauer, a Christian Democrat (CDU) like Chancellor Angela Merkel.

The KSK comprises 1,100 personnel split into six specialist units and is based at Calw in the southwestern German state of Baden-Württemberg.

Last week, the German military's own counterintelligence service, MAD, based in Cologne, told parliament that it had identified a cluster of right-wing extremist incidents within the KSK.

Agency head Christof Gramm in MAD's report said it had identified 14 "red category extremists, including eight classed on the far right-wing, two "Reichsbürger" and four Islamists within the entire Bundeswehr. As a whole it currently comprises of 184,167 soldiers. In addition Germany's armed forces employs 81,000 civilians, including technicians, counselors and jurists.

In a separate development on Wednesday, Germany's Federal Court of Justice confirmed a 7-year jail sentence challenged by Adrian Ursache, Mr. Germany in 1998.

The adherent to the Reichsbürger (citizens of the 'Reich') movement, which disavows the Federal Republic of Germany's post-war constitutional order, had last year been found guilty of attempted murder by a court in Halle, in the state of Saxony-Anhalt.

During a forced eviction by police commandos in August 2016 at a property in Reuden in Saxony-Anhalt, Ursache shot and wounded an officer.

The self-declared founder of the "mini-state Ur" had dodged local tax payments.

In a third case on Wednesday, the Court of Justice, citing a psychiatric report, also declared that Stephan B., the man charged with a partly foiled attack on Halle city's packed synagogue last October, as fully capable to face trial.

During that gun attack, two people were shot dead outside the synagogue. Inside were 52 worshippers marking Yom Kippur. Locked doors kept the attacker from entering the synagogue.

The 28-year-old Stephan B., whose last name has not been made public under Germany's privacy laws, is to go on trial in Naumburg, near Halle.

He has been charged with double murder, attempted murder of 68 people, incitement, bodily harm and predatory extortion.

The Bundeswehr soldier has since been released, but an investigation against him is ongoing. He opposed rules requiring that soldiers and care workers be vaccinated.