Adrian U. was once crowned the most handsome man in Germany. Now he faces charges of attempting to shoot dead a policeman. The defendant is believed to a member of the militant far-right Reichsbürger movement. 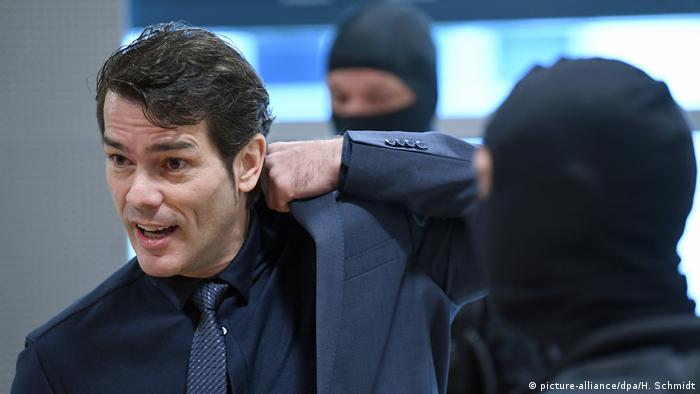 Once crowned "Mister Germany," Adrian U. was in the spotlight for a different reason on Monday, as he answered charges of attempting to murder a policeman before a court in the German town of Halle.

The 42-year-old faces life in prison after he allegedly shot and injured an officer of Germany's special SEK command force in August last year, after authorities tried to remove him from his property in town of Reuden in Saxony-Anhalt by force. Adrian U. himself was shot in the arm during the shootout.

The public prosecutor's office told the judge that the suspect opened fire on the officer without warning, aiming for the head. Only the policeman's heavy protective helmet saved him from being shot dead.

Chief prosecutor Uwe Damaschke told the judge that the killing fulfilled Germany's definition of murder, before adding that U. had at least accepted the possibility of the officer's death.

The prosecution also maintains that U. was a member of the so-called Reichsbürger scene, or "Reich citizens," who refuse to recognize the Federal German Republic founded following World War II or any of its state institutions. Instead they follow only the previous, imperial laws or regulations. The movement is tracked by the Federal Office for the Protection of the Constitution (BfV), Germany's domestic intelligence agency.

It is thought that U. had been trying to defend what he saw as his sovereign land when authorities attempted to evict him. His attack was part of a series of Reichsbürger attacks on police officers. 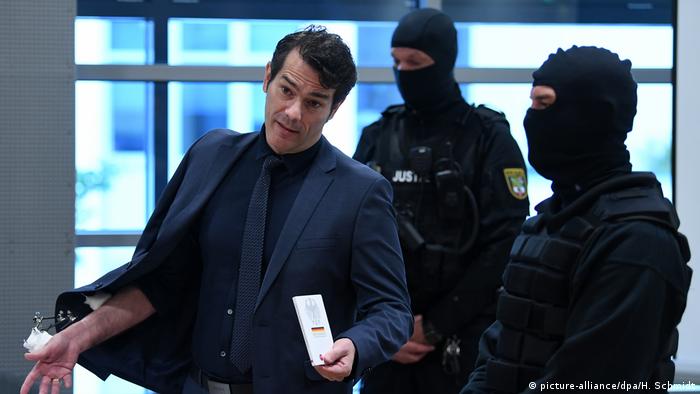 Before a heavily-guarded court, U. shows the metal frame extending from his arm, a result from his shootout with the police.

The 'right to resist'

U. denied the charges, saying that although he was carrying a gun at the time he never opened fire. In his statement before the heavily-guarded court, U. denied that he was part of the far-right militant scene, stating that he was "a German national citizen" with "the right to resist when someone attacks me in my home."

Read more: A broken oath: Reichsbürger in the police force

But U. made no secret of his rejection of Germany's state institutions, claiming that he was a "political prisoner" who had been "taken hostage" by the authorities.

Hearings are scheduled to resume on Wednesday and a verdict is expected by the end of November.