An outgoing Social Democrat lawmaker has been sworn in as the German parliament's new commissioner for Germany's military, the Bundeswehr. Eva Högl said "attitudes" must change. 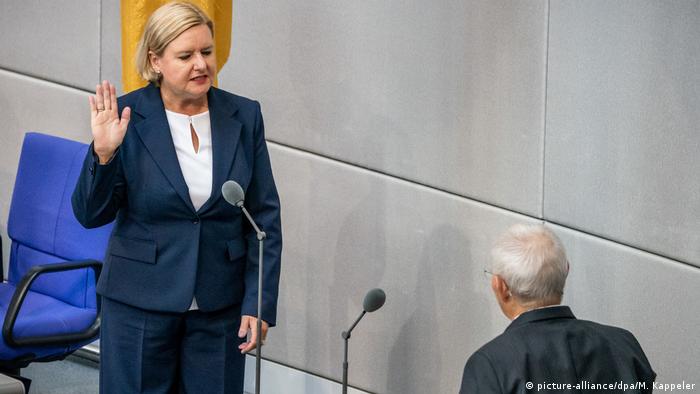 Germany's parliament on Thursday inaugurated Eva Högl as its Bundeswehr overseer, who will head up a new Defense Ministry task force.

Högl said the group must make a "really quite thorough" probe into extremist tendencies in the German military.

Högl told parliament she was not leveling "general suspicion" at the 1,100-person elite forces unit, the KSK, based in Calw in southwestern Baden-Württemberg state, and that she was not targeting the Bundeswehr as a whole.

"It is however not only a cluster of individual cases," she told parliament Thursday.

"We must also look at what we have to do to change the structures so that such attitudes do not spread and to strengthen those soldiers who oppose them," said Högl.

On Wednesday, a spokeswoman for Defense Minister Annegret Kramp-Karrenbauer said the ministerial group probing the KSK would report to parliament.

The KSK's leading general Markus Kreitmayr told KSK members in a letter on May 18 that disclosures about far-right cases — since 2017 — had thrust his brigade into "the most difficult phase of its history."

"In the midst of our community, there were and obviously still are individuals who have been and still are part of the so-called right spectrum," said Kreitmayr, warning they would be removed, but should leave of their own accord.

Under Article 45b of Germany's Basic Law constitution, the commissioner helps parliament oversee the Bundeswehr and is also regarded as an advocate for Germany's soldiers, currently numbering 184,000.

Assuming the post on Thursday, Högl relinquished her mandate as Bundestag member being replaced by the SPD's leftist-oriented Mechthild Rawert.

Bartels had sought reappointment but lost out to Högl, alongside another SPD aspirant Johannes Kahrs, amid critique that Högl had no prior military experience.

Högl's election by parliament in early May with 389 votes hinged on support from Chancellor Angela Merkel's conservatives, including Kramp-Karrenbauer, currently in coalition with the Social Democrats.

The parliamentary commissioner for Germany's army wants to mimic the furniture giant's "choose, pay, and take away" model when buying gear. The Bundeswehr has long suffered "massive" equipment and personnel shortages. (28.01.2020)