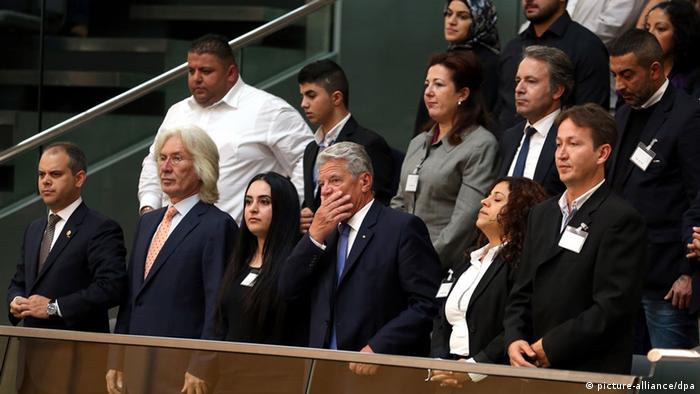 The failure of German police and intelligence services to trace a murder series between 2000 and 2007 to a secret neo-Nazi cell was a "shameful defeat," according to a cross-party inquiry report adopted without abstention or dissent by the Bundestag on Monday.

Only in 2011 did it emerge that the self-described National Socialist Underground (NSU) had murdered nine small business proprietors of mostly Turkish as well as Greek origin and a policewoman across Germany.

Edathy of the opposition Social Democrats (SPD), who chaired the parliamentary inquiry, said his committee had reached its decision unanimously.

Its report contains 47 recommendations on how to improve inter-agency, police and judicial service cooperation and investigative documentation.

The committee's 19-month probe was prompted in late 2011 by the discovery of an apparent murder-suicide of two NSU perpetrators along with the Ceska handgun used in nine of the ten murders. A third suspect, Beate Zschäpe is currently on trial in Munich.

"Such a massive administrative failure, that we ended up determining, should never repeat itself," Edathy said, referring to investigators' initial false theory that the fatal shootings stemmed from feuds in Turkish circles.

Bundestag parliament president Norbert Lammert apologized to relatives of those murdered who were initially and falsely treated as suspects by investigators at crime scenes as far apart as Cologne, Nuremburg and Rostock.

Seated in the public gallery during Monday's almost packed plenary session of parliament were numerous relatives of those murdered, accompanied by German President Joachim Gauck (pictured above) and Turkey's ambassador Avni Karslioglu.

The top representative of Chancellor Angela Merkel's conservatives in the committee Clemens Binniger drew unusual praise from opposition SPD counterpart Dr. Eva Högl. She said he had prevailed against "especially strong resistance" within his own party circles to official disclosures.

"For that, many thanks. That must be said," Högl told her political opponent.

Another committee member, liberal Free Democrat Hartfrid Wolff said the string of investigative failures had resulted in a "grave loss" of public trust in the capability of the security services.

NSU trial adjourns for summer with many unanswered questions

The trial of four suspects, accused of aiding a neo-Nazi terrorist cell, has adjourned for a month-long summer break after being in session for 32 days. So far, the accused have largely refused to answer questions. (06.08.2013)

A memorial to the victims of the alleged National Socialist Underground neo-Nazi terror cell has been unveiled in Dortmund. The alleged surviving member of the cell is currently facing a high-profile trial in Munich. (13.07.2013)

"Why were files erased?" Wolff asked while demanding reforms of police and intelligence services, including better parliamentary supervision.

"We no longer need some of the intelligence services," Wolff added, referring to Germany's complicated swathe of agencies at the federal level and in Germany's 16 states.

The murder cell's source of monies was one of a number of questions still not adequately clarified, Wolff said.

"Alone, the NSU could not have financed itself through their known bank robberies over 13 years. The trio had each only less than 360 euros a month. How did they otherwise finance themselves?"

"Significant international implications, for example in Switzerland, were hardly dealt with by the committee, although we saw how strongly the international network '18 Grad' was active in NSU circles," Wolff told parliament.

Left Party representative Petra Pau said a "failure in state governance" had its roots in a "trivialization" of right-wing extremism in Germany and what she called "institutional racism" in investigative agencies.

She reiterated her Left Party's call for the dismantling of regional state intelligence agencies and a halt to their practice of hiring informants in extremist circles.