A memorial to the victims of the alleged National Socialist Underground neo-Nazi terror cell has been unveiled in Dortmund. The alleged surviving member of the cell is currently facing a high-profile trial in Munich. 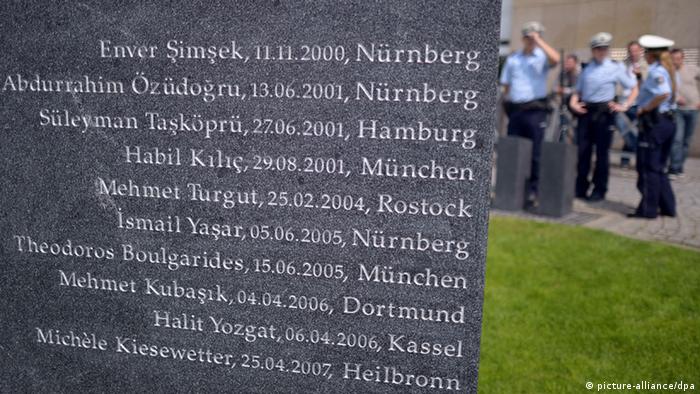 The memorial commemorating the 10 victims - one Greek and eight Turkish immigrants and a German policewoman - killed between 2000 and 2007, was opened near Dortmund's main railway system on Saturday.

The 10-meter (32-foot) memorial stone lists the names of the dead, along with the locations and dates of the killings. Dortmund is believed to have been the location of the NSU's eighth killing in April 2006, when 39-year old Mehmet Kubasik, a native of Turkey, was shot at his kiosk.

Defendant Carsten S. is accused of complicity in the NSU murders for allegedly supplying the gun with which nine of the 10 victims were killed. At the end of his testimony, S. apologized to the families of the victims. (21.06.2013)

The memorial also bears a text jointly worded by the cities of Nuremberg, Hamburg, Munich, Rostock, Kassel, Heilbronn and Dortmund, where the killings took place. Further memorials are to be built in the other six cities.

The text reads: "We are dismayed and ashamed that these acts of terrorism were not recognized for years for what they were: murder in contempt for humankind. We say: Never again!”

Members of Kubasik's family, along with Turkish Consul General Sule Ozkaya and the German commissioner for the NSU victims' families, Barbara John, attended the inauguration.

The memorial was unveiled by Dortmund Mayor Ullrich Sierau, who said it should "remember the deeds and honor the victims."

At the ceremony, the minister for integration for the state of North Rhine-Westphalia, Guntram Schneider, condemned the perpetrators. Schneider apologized on behalf of the state government to the victims for their suffering.

Trial of the decade

The surviving member of the National Socialist Underground neo-Nazi terror cell, Beate Zschäpe, is currently on trial in Munich for her alleged role in the killings. She is believed to be one of the founding members of the NSU, a group that went undetected in Germany for over a decade.

The group's cover was blown in November 2011 with the dramatic apparent suicide of two of Zschäpe's suspected accomplices - the torching of an apartment believed to be shared by all three alleged members of the cell. A few days after the fire, Zschäpe turned herself in to police in the eastern city of Jena. It was only after this that German investigators linked the series of murders to the far-right, having earlier suggested that they may have been carried out by organized criminals from immigrant communities.

The case has deeply embarrassed the authorities and led to the resignation of the head of Germany's domestic intelligence agency and some of his counterparts at the state level.

Adding to the trial's high profile was a media accreditation debacle that has drawn negative attention to the upper regional court in Munich where the trial is being held. The initial accreditations, given on a first come, first served basis, gave 50 journalists access to cover the trial. However, none of the reserved press seats had been given to foreign journalists as none had applied early enough. A Turkish newspaper appealed to Germany's top court about the allocation of seats and a quota was implemented.