The chairman of the Social Democrats (SPD) has said a comprehensive approach to the migrant crisis had to involve the return of refugees to North Africa. His words echoed sentiments made by Germany's interior minister. 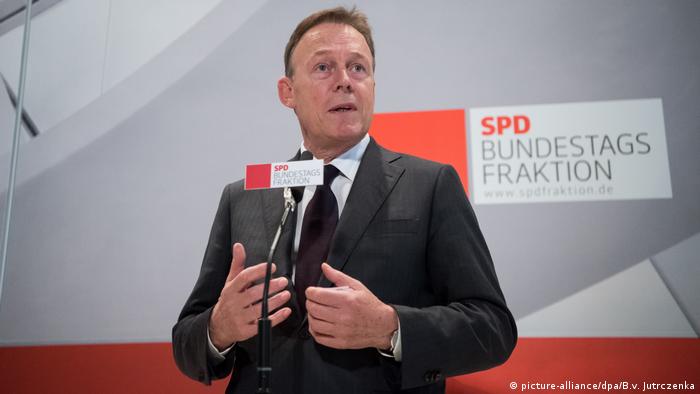 Marking a shift in his party's rhetoric, the chairman of the SPD-Parliamentary Group, Thomas Oppermann, spoke out in favor of sending refugees arriving on boats back to North Africa. In an editorial he penned in the Sunday edition of the German daily newspaper "Frankfurter Allgemeine Zeitung", Oppermann justified his view arguing that this would be an important step to curb human trafficking.

"In order to fight human trafficking gangs more successfully we have to deprive them of the grounds on which they conduct their business, by returning refugees saved in the Mediterranean to North Africa and attending to their needs there," Oppermann wrote.

"The solution will not solely involve a greater level of cooperation with the broken country of Libya but will also include more stable transit countries in North Africa, including Morocco and Tunisia."

Oppermann's words come in support of an initiative by German Interior Minister Thomas de Maiziere aimed at establishing a reception center for refugees in Tunisia and thus strengthening Europe's borders. De Maiziere last month said that some refugees should "not arrive in Europe in the first place but rather be returned to safe places."

EU leaders recently also agreed that they want to work toward expanding these centers, particularly into Libya.

Oppermann further wrote that Germany needed to do more to combat the causes of mass migration, highlighting a five-point plan at the start of what is expected to turn into a nerve-racking election year in Germany. Among other things, Oppermann demanded an increase to Germany's annual spending on aid, which currently amounts to 0.5 percent of the country's GDP. Oppermann's plans would raise this to 0.7 percent. His ideas, however, may land on deaf ears, as Germany has threatened to cut development aid to countries that refuse rejected asylum seekers.

Furthermore, he also explained that he wanted to improve border protection along the external borders of the EU, demanding greater cooperation with North African countries to stop the "mass influx" of migrants, while simultaneously improving legal channels of migration into Europe.

"If you want to combat illegal immigration, you have to create legal ways of immigration, chiefly by way of agreeing upon contingency plans involving an orderly resettlement procedure," Oppermann added. He explained that this could expand all the way to introducing "flexible" EU-wide immigration laws based on a points system, which would evaluate prospective migrants on the merit of their contributions to the work force.

Oppermann said that this could actually lead to a situation of various countries actually competing against each other to attract certain immigrants that might be needed in professional areas that are otherwise understaffed.

It’s been five years since the EU announced a migration deal with Turkey that many NGOs have said amounts to the bloc outsourcing its migration management.