Prosecutors have asked a regional court in northern Germany to permit the extradition of the former Catalan leader to Spain. Puigdemont has been detained in Germany since March 25. 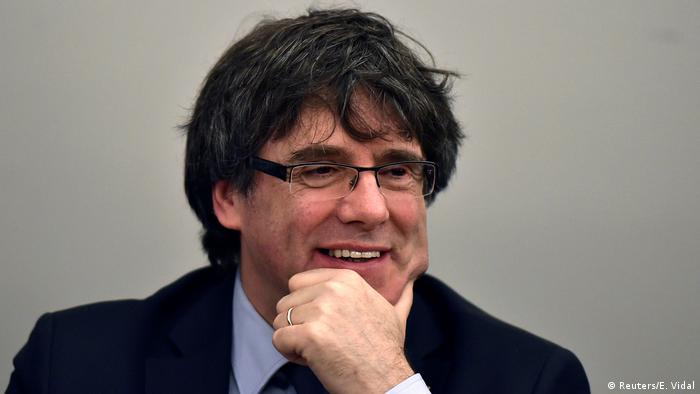 The public prosecutor for Germany's northern state of Schleswig-Holstein announced on Tuesday that it had requested the extradition of former Catalan President Carles Puigdemont.

Puigdemont is being charged in Spain with rebellion and misuse of public funds, for his involvement in the Catalan independence referendum of October 2017. The former leader was living in self-imposed exile in Belgium and was in Finland on March 24, when Spain reactivated the European arrest warrant against him. Puigdemont was arrested when he entered Germany on March 25, as he was making his way back to Belgium.

Puigdemont's case has now gone to Schleswig-Holstein's highest court, where a so-called senate of three judges will decide whether the request for extradition has the necessary substance and whether Puigdemont should continue to be held.

"At the moment, it is too early to say when a decision by the Senate for Criminal Matters on the application for the extradition arrest warrant may be expected," the court said in a statement.

In an interview with Catalan radio, Puigdemont's lawyer Jaume Alonso-Cuevillas spoke of "infringements of basic rights that we will prove have been committed by the Spanish state" and called his client "a political prisoner."

The German government said on March 30 that it would not interfere or veto any court decision on Puigdemont's fate, as the act would be considered a "legal affront" by the federal government against the judicial system.

Does rebellion amount to high treason in Germany?

Whether or not Puigdemont will be extradited hinges upon whether the crimes he's accused of in Spain are also illegal in Germany. In a press statement, the prosecutor's office said that the Spanish crime of rebelion was the equivalent of the German offense of high treason, even though the two laws in question were worded differently.

Prosecutors also argued that it was reasonable for Puigdemont to be brought up on charges of misuse of public funds since the Catalonia independence referendum cost more than a million and a half euros.

The prosecutors said that Puigdemont should continue to be kept in custody because he represents a flight risk.

But one of Puigdemont's German lawyers disputed the idea that Puigdemont had done anything potentially punishable under German law, arguing that high treason must involve the threat of violence.

"The hurdle is extremely high in that the perpetrator must exercise violence or threaten with violence," attorney Wolfgang Schomburg told DW-TV. "There is not the slightest proof (of that)."

Schomburg added that convicted individuals of crimes based on their political beliefs was strictly forbidden by German law.

After Puigdemont's arrests, supports of the Catalonian leader took to the streets in various cities in Spain and Germany to demand his release. Members of Germany's Left Party have also visited Puigdemont in the prison where he is being held in the northern German city of Neumünster.

"The Spanish judicial system has obviously cobbled together a politically motivated charge in accusing Puigdemont of misusing state funds for carrying out the referendum," said the Left Party's Sevim Dagdelen in a statement. "The Catalonia conflict should be solved politically instead of further criminalizing those involved in it."

The other German parties have said that Puigdemont's extradition is a matter for German courts. According to the guidelines of European law, Puigdemont's case should be decided within 60 days of his arrest, although no date has been set for the higher court in Schleswig-Holstein to render its decision. Puigdemont has the option of filing a challenge to Germany's Federal Constitutional Court, should the decision go against him. Puigdemont's legal team has already filed an appeal in Spain against attempts to prosecute him there.

The theatrics continue around the Catalonian ex-president now facing extradition from Germany. The pro-independence leader should return to Spain to face justice like his comrades, writes Bernd Riegert. (03.04.2018)

A decision on whether Germany will extradite ex-Catalonian leader Carles Puigdemont won't be made before Easter. The case likely hinges on the similarity between Spanish and German law. (26.03.2018)