A decision on whether Germany will extradite ex-Catalonian leader Carles Puigdemont won't be made before Easter. The case likely hinges on the similarity between Spanish and German law.

Spain is 'cracking down on elected politicians'

A court in Neumünster in Schleswig-Holstein on Monday extended the remand of Carles Puigdemont. The Catalan leader was detained by police in the northern German state the day before. It's the first legal step in a possible extradition to Spain.

On Friday, Madrid reactivated a European arrest warrant for Puigdemont for the crime of rebelion, which denotes rebellion against the state. The former regional president of Catalonia faces up to 25 years in prison on sedition charges in Spain in connection with Catalonia's independence movement.

If the court decides that German authorities can keep Puigdemont, his case will be remanded to a higher regional court in the city of Schleswig, where he could face formal extradition proceedings. Germany must then decide whether to hand over the Catalan leader within 60 days — or 10 days if he himself agrees to his extradition. A court spokeswoman said it was unlikely that a decision could be reached on extradition proceedings before Easter.

Legal experts agree that Puigdemont's fate will likely be determined by the degree of convergence between German and Spanish law.

Under EU law, member states must honor European arrest warrants issued on behalf of member states. But states have the option of not extraditing a suspect if the act of which that person is accused is not a crime in the extraditing state.

Germany's criminal code includes the crime of high treason. Germany thus has little option but to hand over Puigdemont, if that offense is deemed equivalent to rebelion. It has been speculated that Spanish authorities' belief in the similarities between the two countries' legal systems is likely a reason why the Catalan leader was taken into custody in Germany.

"What matters is the content of a crime, not the specific name it has been given," said a German Justice Ministry spokeswoman at the government's press conference.

But she cautioned that it was up to regional courts in Schleswig-Holstein to make any necessary judgements about whether rebelion and treason were comparable offenses, should it come to extradition proceedings. One potential sticking point in the comparison could be the fact that treason in Germany is sometimes thought to presuppose the threat of physical violence against the state.

Puigdemont was detained after crossing from Denmark into Germany while traveling by car from Finland, where he had given a lecture, to Brussels, Belgium, where he had resided in exile since last October. Puigdemont had received signals that Belgian authorities would not extradite him to Spain. 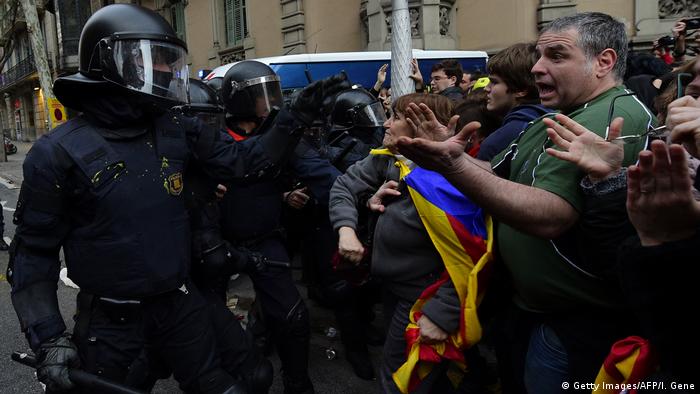 The news of Puigdemont's arrest sparked protests in Catalonia

Some have asked why the Catalan leader was first arrested in Germany when he had also driven through other EU member states, including Denmark, that could have executed the warrant.

Spanish media, including the newspaper El Pais, have reported that Spanish intelligence services had been keeping Puigdemont under surveillance and had specifically shared their information about his whereabouts with German authorities because of the history of good cooperation between Spanish and German law enforcement. El Pais quoted unnamed sources within the Spanish intelligence services as saying they had "excellent" relations with their German colleagues.

At the German government's press conference, spokespeople from the Interior and Justice ministries confirmed that there had been contact with Spanish colleagues but did not describe in detail what had led Schleswig-Holstein police to stop Puigdemont's vehicle.

A German police spokesman said on Monday that the officers involved had no option but to detain the Catalan leader.

The European Council Framework Decision of 2002, which governs European arrest warrants, states that they are to be adjudicated by the legal systems and not the political leaderships of the countries involved.

In other words, it's up to the courts — a position to which the German government was hewing the day after Puigdemont's detention. On Monday, Justice Minister Katarina Barley told German public TV that Berlin would not be intervening in the case.

On Sunday, Josep Costa, the vice president of the Catalonian parliament, told DW that the warrant was "without merit" and "politically motivated." He added that he hoped whatever court would decide Puigdemont's fate would not grant his extradition.

Andrej Hunko, from the opposition Left Party in Germany, called Puigdemont's arrest a "disgrace." But Robert Habeck of the opposition Greens said that his party supported the government's position.