The German parliament has been summoned for a special Wednesday session to vote on a new bailout deal for Greece. Chancellor Angela Merkel is likely to face more resistance from within her party. 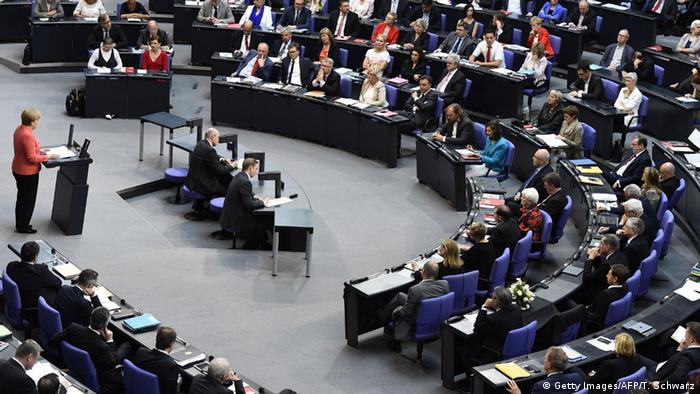 The 631 elected representatives of the Bundestag, currently on holiday, have been asked to return to Berlin on Wednesday to approve a third aid package for Greece.

While there is little chance that the Bundestag will reject the new bailout deal, the vote is being seen as a leadership test for Merkel, especially as there is no guarantee that the International Monetary Fund (IMF) will participate.

The lawmakers endorsed a continuation of negotiations on July 17, but the 85-billion-euro ($95-billion) package on the table now still needs approval.

Merkel is likely to face increased resistance after 65 lawmakers from her conservative Christian Democratic Union broke ranks and voted no in the July vote.

After backing two previous bailouts, the Washington-based IMF renewed its call for debt relief - something that has represented a rift between the global financial institution and the Eurogroup in recent months.

The money would represent the third aid package for the indebted country of 11 million people, and is designed to provide capital to keep the country's economy solvent.

But the package also includes painful austerity measures that critics of past bailouts say have created a downward spiral. The Greek government, some argue, has been forced to pump money out of the country to service foreign loans, choking the domestic economy, and depriving the state of tax revenue to pay its debts.

This third package imposes privatizations, cuts in public spending and a slew of reforms that Greek voters rejected in January, when they elected the anti-austerity Syriza government, and in a subsequent referendum.

Opinion: The referendum as a weapon

Greeks have voted and a majority has decided against the austerity measures demanded by the eurozone and the IMF. The government is seeking to profit undeservedly from the result, writes Spiros Moskovou. (06.07.2015)