German prosecutors have charged a Russian national with the suspected contract killing of a Georgian citizen in Berlin last year. Heiko Maas said the government "reserves the right to take further action." 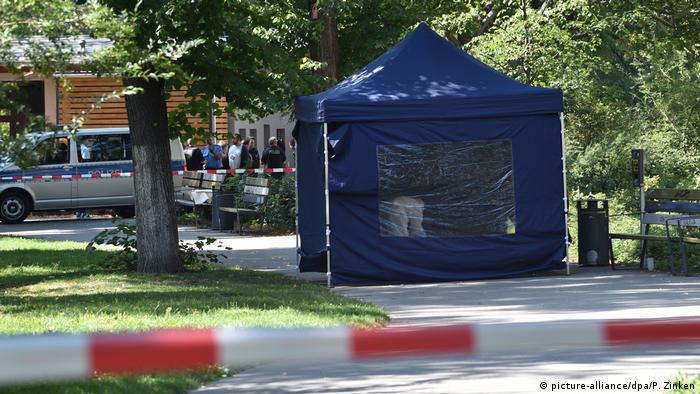 German federal prosecutors on Thursday charged a Russian national with murder in the killing of a Georgian citizen in Berlin last year, a crime they believe was ordered by the Russian government.

German Foreign Minister Heiko Maas threatened the Kremlin with sanctions over the killing.

"The government expressly reserves the right to take further measures in this case," Maas said on Thursday in Vienna.

The minister characterized the situation as an "extremely serious matter" and said it was "indispensable" that it now be cleared up in court. He said the Russian ambassador had again been invited to the foreign ministry for a meeting.

In December, the foreign ministry expelled two Russian diplomats from Berlin, citing a lack of cooperation with the investigation into the broad-daylight shooting of a 40-year-old Georgian of Chechen descent.

The victim, Tornike K., had fought against Russian troops in Chechnya and survived multiple prior assassination attempts.

Read more: Opinion: Russia still lives in the shadow of the Chechen war

Prosecutors said they believe that Russian state actors were behind the crime.

"The circumstances behind the contract killing was the opposition of the victim to the Russian state, to the governments of its autonomous republics Chechnya and Ingushetia, and to the pro-Russian government of Georgia," the prosecutor's office in Karlsruhe said.

Prosecutors filed charges of murder and a violation of weapons laws against a Russian citizen they identified as Vadim K., who goes by the alias Vadim S.

At some point last year, "state agencies of the central government of the Russian Federation" tasked him with "liquidating" the victim, prosecutors said in a statement.

The suspect "accepted the state killing assignment," they said.

"He either hoped for a financial reward or he shared the motives of those who tasked him to kill a political opponent and take revenge for his participation in earlier conflicts with Russia."

The murder case and alleged Russian interference in the 2015 hacking of Germany's parliament have strained relations between the two countries in recent months. In May, Berlin said it would seek EU sanctions against a Russian man over his alleged role in the hacking.