Only 1% of refugees worldwide have access to higher education; Heiko Maas calls the figure "frighteningly low." The UN's German-financed "Einstein Initiative" aims to up the number by 2030, but much more must be done. 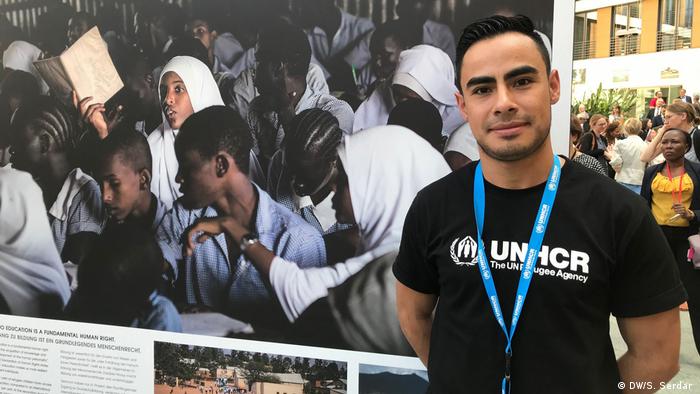 Bahati Hategekimana's family fled from Rwanda to Kenya when she was a baby. Her education story is "unique," she says — she was taught in a school run by refugees themselves in Kenya.

It was "a little French school in this English-speaking country knowing that your children will not be able to work with this other language," recalls Hategekimana. "But they taught us math, science, religion, everything in French. And by the time I was applying for the DAFI scholarship, I had everything I needed to know taught to me by refugees." Her story is a positive one, but education for refugees is a more pressing problem than ever. On Wednesday, the United Nations High Commissioner for Refugees announced in a report that nearly 71 million people are displaced worldwide — and that figure is likely to rise.

Through the Albert Einstein German Academic Refugee Initiative (DAFI), 15,500 students have received higher education since the founding of the program in 1992. A scholarship to reward and encourage excellence, the initiative is named after famous German-born physicist Albert Einstein, who could not return to his homeland in the 1930s due to the Nazi regime. Implemented by the UNHCR, the main contributor of its scholarship funds is the German government.

The scholarship is offered to refugees in the countries where they reside, explains DAFI's Global Manager Maren Kroeger, meaning that "a Somali refugee can go to a university in Kenya and obtain an undergraduate degree." The full four-year scholarship covers students' school registration and tuition fees. A monthly stipend is also offered, which helps students pay for transportation, housing and food. 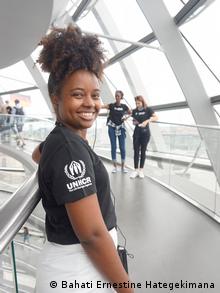 The program is offered in 52 countries. Last year, 6,866 students received the scholarship, marking the highest annual number since the program's inception. Syrian students have been the primary recipients of the scholarship in 2018, with the top five countries of study being Turkey, Ethiopia, Jordan, Uganda and Kenya.

Now 25 and about to graduate from a nursing school in Kenya, Hategekimana is among the lucky few. She wants to use the chance she was given to help other refugees. "Camps are usually crowded and you don't have enough health workers," she says. "We have people in war zones that are dying and not many medical professionals are willing to go there. That's something I would really want to do."

Even though there are thousands of young refugees eager to study and make a contribution to the society they are living in, the comparatively low number of scholarships available is a challenge for a population that faces significant financial, social and bureaucratic insecurity on a daily basis.

According to UNHCR, in 2018 alone there were more than 10,000 applications for 1,134 new DAFI scholarships. Speaking on Tuesday evening at the conference opening of "The Other 1 Percent – Refugees at Institutions for Higher Education Worldwide," German Foreign Minister Heiko Maas called for better education access for refugees. "While 36% of young people around the world can get a higher education, the number among refugees is just 1% — a frighteningly low number."

The UN refugee agency has set a new goal for 2030 and aims to increase the higher education figure among refugees to 15%. "This is an ambitious goal," says scholarship manager Kroeger, but she was optimistic it could be achieved if universities for example "are maybe ready to waive tuition fees."

"It could be through foundations that are committing to include refugees into the program," or the private sector could step in and fund scholarship programs, she said.

Speaking at the conference in Berlin, UN High Commissioner for Refugees Filippo Grandi also emphasized action during his speech: "We should not resign ourselves to the narrative that it is impossible to solve this huge global problem." He praised the fact that "there is a lot of solidarity" provided to assist refugees in host communities and for the Global Compact on Refugees officially affirmed by the UN General Assembly last year.

Even though more resources are needed and multiple challenges lie ahead, DAFI scholarships continue to change lives. Scholarship alumnus Oscar Garcia Suarez, 33, is from Colombia and has lived in Ecuador for the past decade after having to flee his home country due to violence. Looking back, he is grateful to have had the opportunity to study; the months without documents and without work when he first arrived in Ecuador were the hardest for him. Now, he works as an English teacher and contributes to his host country, and he says he wants other young refugees to know that it "is possible to achieve a dream."

Reflecting on her journey, Hategekimana hopes to create bridges between host countries and refugees. One day she wishes to sit at the same table with policymakers and tell them: "You are lucky that your country is peaceful. Those who are not as lucky as you are did not choose that." She would then ask them: "What if it was your children who were in this situation? Wouldn't you fight for refugee kids to go to school?"

Former President Christian Wulff has warned Germans from entertaining far-right causes. He said the arrival of refugees at the height of the migration crisis could eventually be as momentous as reunification. (19.06.2019)

When refugees in Germany are exploited by their fellow countrymen

Most bosses in Germany abide by employment regulations when they take on refugees. But there are exceptions — including some bosses with a similar cultural background. (01.03.2019)

A team of researchers concluded that Angela Merkel managed the 2015 refugee crisis "quite well," and Germany is better prepared for another one. But some experts had stinging words for the EU's disjointed asylum system. (08.05.2019)