For the first time ever, the number of displaced people reached 70.8 million at the end of 2018, according to the UNHCR. The agency's chief warned against a hostile climate for refugees, but Germany came in for praise.

Over 2 million people were forced to flee their homes last year, driving up the number of the displaced to a record 70.8 million worldwide, the UN refugee agency UNHCR said in its "Global Trends" report released Wednesday.

The figure includes refugees, asylum-seekers and internally displaced people at the end of 2018.

In an interview with DW, UNHCR chief Filippo Grandi said there had been "many failures" in managing these population movements.

"We have to recognize that in Europe, for example, they were designed for much smaller numbers," he said. "When the numbers became bigger in 2015, Europe was not ready and that sent the wrong message." 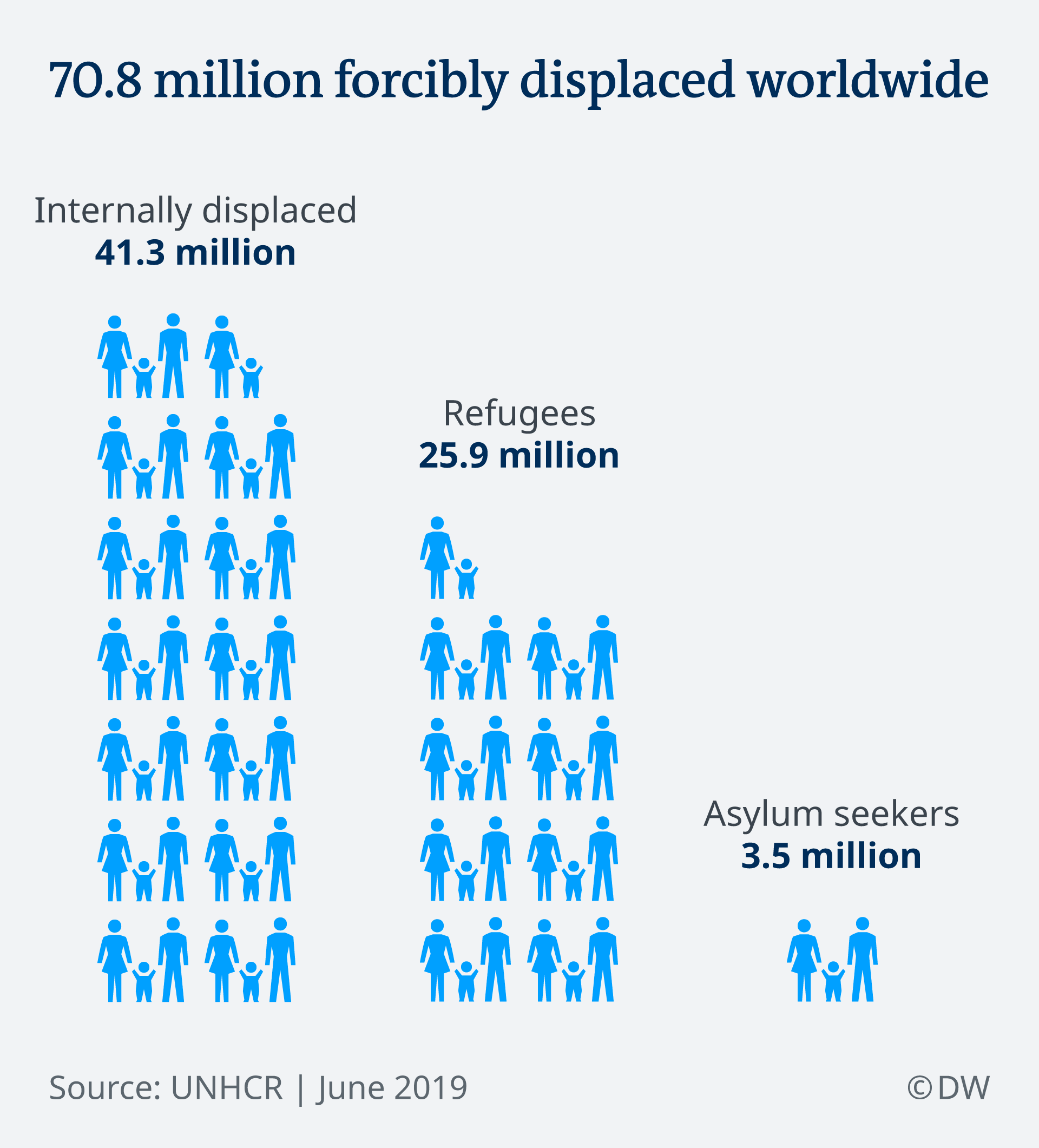 Violence in Ethiopia drove about 1.56 million people to leave their homes last year, although vast majority of the displaced stayed inside Ethiopian borders.

Over one-fifth of global asylum seekers came from Venezuela, where people are fleeing deep political and economic crisis. The UNHCR noted some 340,000 asylum seekers from the South American country, but said the actual number is likely much bigger due to the Venezuelan crisis being underreported. The UN believes some 4 million people have left Venezuela since the start of 2016.

"Otherwise these countries will not bear the pressure anymore and then they have to resort to measures that will damage refugees," he said. "We are in a very dangerous situation."

Grandi commended the US for being the "largest supporter of refugees" and the biggest single donor to UNHCR. At the same time, he decried hostility that the displaced people face.

"In America, just like in Europe actually and in other parts of the world, what we are witnessing is an identification of refugees — but not just refugees, migrants as well — with people that come take away jobs that threaten our security, our values," Grandi said. "And I want to say to the US administration — to the president — but also to the leaders around the world: This is damaging."

"It's a line that many people embrace because they have apprehensions and fears. But it is not a good line," he told DW.

He also criticized long-term administrative issued in the US that caused it to have world's biggest backlog of asylum seekers. Some 719,000 asylum claims are currently waiting to be resolved in the US.

"Restrictions, closures, push backs are not only wrong. Let's remember that these people are fleeing from war, conflict, violence and discrimination. So they need help," Grandi said. "The problem will not go away. It would just move to another part of the world. It would be a problem there. And it is just waiting to come back to the rich countries." 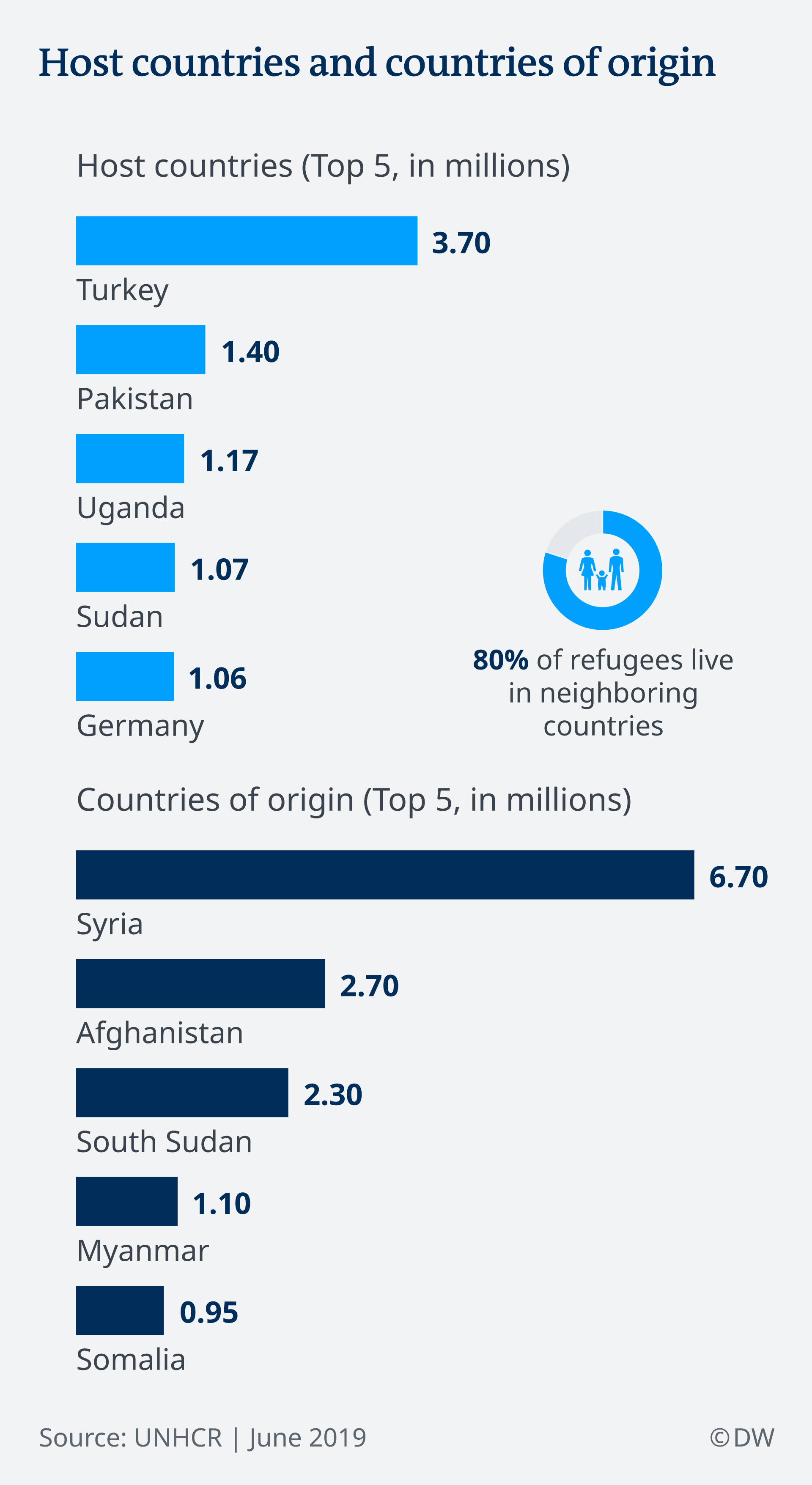 On a positive note, Grandi praised Germany for accepting migrants and working to "demystify" the notion that migration is unmanageable, "even when the numbers are very big."

He noted that Chancellor Angela Merkel had paid a "heavy price" politically for her migration policy, but said this made her actions "even more courageous."

Another year, another record

The number of forcibly displaced people has been growing for the last seven years and has risen nearly 65% compared to ten years ago.

Read more: Half of the world's refugee children can't go to school

"Yet another year, another dreadful record has been beaten," said Jon Cerezo of British charity Oxfam. "Behind these figures, people like you and me are making dangerous trips that they never wanted to make, because of threats to their safety and most basic rights."

The Wednesday report also notes that developing countries take in by far the largest number of refugees.

A new study has found that although many refugees find work, most are in temporary positions. Researchers say that bureaucratic hurdles are just as much a hindrance as personal shortcomings. (18.06.2019)