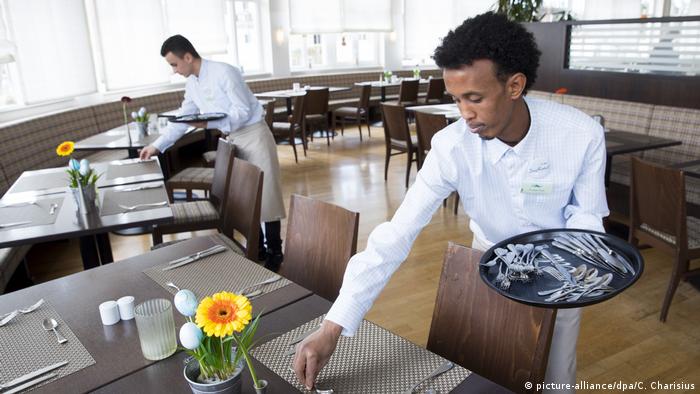 Refugees may be able to find in Germany, but they tend to find it in low-paying temporary jobs rather than truly integrating themselves into the national labor market, according to a new report presented by the German think tank Berlin Institute on Tuesday.

The institute found that some 95,000 refugees from Germany's eight most significant countries of origin — Afghanistan, Eritrea, Iran, Iraq, Nigeria, Pakistan, Somalia, and Syria — had found jobs between February 2018 and January 2019. Though roughly one-third of them were employed in insurable jobs, the rest were employed in service industry jobs or as temporary workers.

The report found that although just one-sixth of refugees had worked as untrained assistants at home, almost half were doing so in Germany.

Bureaucracy as limiting as lack of language skills

Researchers say that although personal shortcomings — for instance a lack of German language skills — tend to hinder refugees' chances, labor laws and German bureaucracy made their lives more difficult still.

Most of those whom the study's authors interviewed were between the ages of 18 and 24, and thus candidates for vocational training. Nevertheless, that step requires time. The authors say that most candidates need at least two years of intensive language training before embarking on another two to three years of job training.

Many refugees simply don't have the luxury of not earning money for such a long period as they are trying to support family or pay back human traffickers for their journey to Europe.

Thus, most refugees tend to take the first job they can find. "That can quickly turn into a dead-end," says Reiner Klingholz of the Berlin Institute.

Employment as a stepping stone to integration

Klingholz's colleague Frederick Sixtus argues that Germany must do more to recognize qualifications that some refugees attained in their home countries, though he says that is made difficult by the fact that most countries don't place as much importance into formal qualifications as Germany does, so corresponding certificates may not exist.

Klingholz admits that another issue keeping many refugees in low-paying jobs is that "many of these people come to Germany wholly unprepared." He says that roughly one-quarter of those interviewed had never attended school, or at most had completed primary school.

Engelhard Mazanke, who heads Berlin's immigration authority, said the problem was a difficult one to solve because so much was riding on it for refugees. He did, however, suggest that employment should be weighed positively when refugees applied for family members to join them in Germany.

Open language courses to all

They said that uncertainty over refugee status put employers in a difficult position on hiring. They also questioned the wisdom of limiting access to integration and language courses to those refugees the government deemed most likely to be granted permanent residency status.

Reiner Klingholz called on lawmakers to come up with new approaches, suggesting all refugees should be offered language courses, saying early offers for young refugees would contribute to overall labor market participation.

Complexity helps no one

Beyond Germany's arcane labor laws, the authors' pointed to the maze of offices charged with overseeing a refugee's access to the labor market.

Researchers said that proof of qualifications, overly complex laws, and lack of clarity as to relevant authorities helped no one, neither the business community, refugees, nor administrators.

One of the concrete legal suggestions the authors made was a deadline solution for residency status regarding anyone who came to Germany between 2015 and 2017. The authors argued that permanent residency status should be based on the degree to which an individual had successfully integrated into German society.