German Foreign Minister Heiko Maas is heading to Washington for talks and to open the Year of German American Friendship. On departure, he said transatlantic ties remained crucial, Donald Trump notwithstanding. 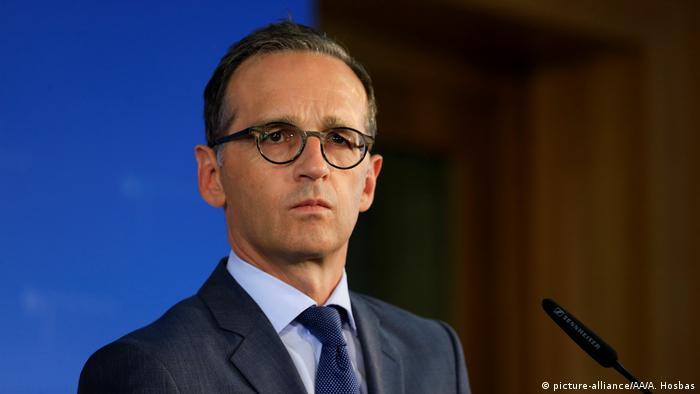 Germany needs to engage in intensive dialogue with the United States at a time there are significant transatlantic differences, Foreign Minister Heiko Maas said Tuesday before departing for Washington.

Although Berlin and Washington "don't see eye-to-eye on all political issues at the moment," the German-American friendship is "non-negotiable," Maas said.

Read more: Maas: Europe can no longer rely on the United States

"The United States of America remains the Europeans' most important ally," he said.

Since US President Donald Trump came to office in January 2017, German-American relations have been strained over issues such as the Iran nuclear deal, climate change, trade and NATO military spending goals.  Trump has taken multiple verbal shots at Germany and Chancellor Angela Merkel, most recently during his UN General Assembly speech.

Maas said that "at least there is an appearance" that relations between Berlin and Washington are "strained."

"Things that used to be taken for granted are no longer that way, they must be worked on," Maas said. Under former President Barack Obama there were also differences of opinion, but also intensive dialogue. "That does not happen anymore," he said.

Maas is a Social Democrat with a pronounced liberal streak who in August penned an article calling for a more balanced transatlantic relationship. He also said during the summer that European differences with the US "can no longer be swept under the carpet." However, the 52-year-old said on Tuesday that he didn't believe in a strategy that revolved around simply waiting out the Trump administration.

"Because I believe that some of what is currently changing is structural," Maas said.

The reason for Maas' trip to Washington is to kick-start a German charm offensive with the opening the Year of German American Friendship on Wednesday.

Under the motto "Wunderbar Together," more than 1,000 events will held across all 50 states over the next year to promote German and American contact and understanding.  The events will focus on diversity, technology and climate, among other issues.

Read more: A Germany Year in the US: Opening up the conversation

The goal is "to not just maintain the relationship we have but rather improve it," Maas said. "It is designed so that people learn more about Germany than is probably the case through the media."

While in Washington, Maas will also meet with US Secretary of State Mike Pompeo, National Security Adviser John Bolton, US Trade Representative Robert Lighthizer and members of Congress.

Syria, the Iran nuclear deal, Russia and German-American relations will be discussed, according to the Foreign Ministry.

Germany's foreign minister, Heiko Maas, has called on the United Nations to "stop beating around the bush" and start talks on reforming the Security Council. A push for change has been ongoing since the early 1990s. (28.09.2018)

Germany's top diplomat said international policymaking is burdensome when the US president's words have a "half-life of 24 hours." Maas said he was unconvinced by Trump's attempts to backtrack on his Helsinki remarks. (18.07.2018)