German elections: What’s in them for Africa?

The G20 presidency, Compact with Africa, the Marshall plan – never before has Africa had such a platform in German politics. But could elections change things? DW took a look at the German parties' manifestos. 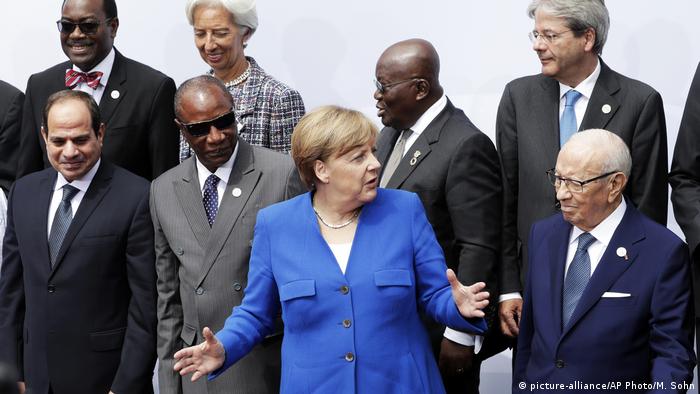 Africa has, of course, not made it on to any German campaign posters. The most important topics for German voters are, after all, the national issues like social justice, security and fair wages. The African continent has, however, become something that German parties can no longer ignore. "If you look at the manifestos, each party has one or the other passage about Africa," said Bernd Bornhorst from the developmental umbrella organization VENRO.

That's no surprise. The high numbers of refugees have given rise to more discussions about Africa than ever. Chancellor Angela Merkel made Africa a focal topic for the German G20 presidencyand three German ministers put forward new development approaches.

And while critics lament that Germany's G20 efforts have made little difference, aside from the creation of new investment partnerships with five African countries, Merkel's Christian Democrat (CDU) party is determined to maintain this course. The Compact with Africa program is supposed to continue beyond Germany's G20 presidency.

Both the CDU and the smaller FDP party have placed their hopes in private investment for Africa, which is meant to complement classical development aid. Skeptics say that this mainly benefits German companies instead of improving living conditions in Africa.

"It's also my personal belief that the issue of poverty cannot be solved without additional private investment," said Andreas Lämmel, chairperson of the CDU's working group on Africa. "You can see that in the fact that we've pumped so much money into development aid for years and we haven't seen the kind of dynamic development that we had hoped for."

The Social Democratic Party (SPD) is more careful about this matter. "We believe that there is a lot of room for private investment in Africa, but we also believe that it's important that these investments create jobs and opportunities for the people there," said Gabriela Heinrich, the SPD's deputy speaker for development politics in the German parliament. The SPD, however, supported the government's G20 agenda. The SPD's Brigitte Zypries, Germany's current minister for economic affairs, started the initiave "Pro!Afrika” which also promotes private investment.

The SPD's manifesto reads like an attempt to cautiously distance itself from the CDU, its coalition partner. For instance, it has said that it also wants to work together with other partners, aside from firms, such as churches, unions and private development organizations. In actual fact, it reads more like the classical development approach. It, however, also wants to scrutinize controversial economic partnership agreements between Africa and the EU.

Unlike the SPD, Germany's Green Party hopes to renegotiate current economic partnerships with Africa entirely. They've also called for a fairer European trade and agricultural policy. Germany would, of course, need the support of other EU member states for this. They want a tougher regulation for international financial markets in order to put a stop to commodities trading. And they want a reform of the World Trade Organization and for development work to become more efficient. They, however, offer little insight into how they intend to manage the latter.

In terms of migration politics, the Greens are against agreements that tie development aid to the readmission of people who were denied asylum. Furthermore, the Greens oppose migration agreements with countries that do not adhere to international human rights standards.

The manifesto of Germany‘s Left Party largely overlaps with that of the Greens: "German foreign policy should make an effort to create a socially just global infrastructure instead of holding on to unfair trade relations," the agenda demands. Germany's development policies should reorient themselves. The export of EU agricultural products and food products should no longer be subsidized as, according to the Left Party, these subsidies destroy agricultural production in developing countries.   .

How important is Africa really?

The conservative FDP and the new rightwing AfD party also both address Africa in their manifestos. According to recent polls both parties have a chance of gaining seats in the next German parliament.

For the FDP, Africa is the continent of opportunities which should play a prominent role in development cooperation. Once again, the private sector should be involved.

The AfD sees Africa as more of a threat. It expects mass migration to Europe from Africa and it wants to see stronger ties between development, German trade and security interests. The AfD also sees a role for private investment in Africa but says very little about any specific measures. Interestingly, the party also calls for the opening up of German markets for products from developing countries.

While Africa now has a stronger presence on Germany's political agenda, VENRO's Bernd Bornhorst believes that the continent will not receive as much attention in the future as it received in recent months. " We believe that there was a lot of activity because elections are just around the corner and politicians needed to show that they were doing something," he told DW. "The activity will probably slow down and will only rise again when the next refugee crisis arrives."

Politics is about finding a compromise, so it is no surprise that the issue of migration is increasingly defining discussions between Africa and Europe. But this approach is not without risks, writes Jens Borchers. (24.02.2017)

An endless debate on refugees

Refugees have made headlines in Europe for the last two years. But the debate is endless because it avoids all the uncomfortable issues. To the satisfaction of those who profit from human misery. (20.06.2017)