Four weeks before the Bundestag election, Angela Merkel's rival center-left party is seeing a rise in public support. The three leading candidates for chancellor are set to square off on live TV on Sunday evening. 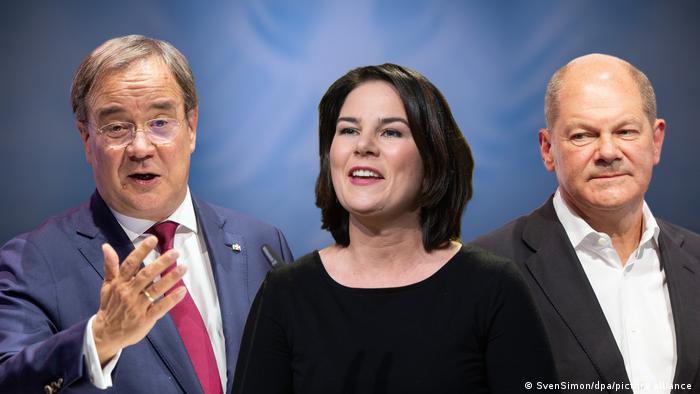 A poll released ahead of Sunday night's TV debate between candidates to succeed Angela Merkel as German chancellor showed the Social Democrats (SPD) surging ahead of the conservative bloc, continuing a recent trend.

Polling numbers for the climate-friendly Greens held at 17%.

While Merkel led the CDU/CSU bloc to four consecutive electoral victories and has dominated politics for the better part of the last two decades, she has decided to step down.

Sunday night's debate will see the three main successor candidates — the CDU/CSU's Armin Laschet, Olaf Scholz of the SPD and the Greens' Annalena Baerbock — face off on live TV. The debate will be hosted by commercial broadcasters RTL and ntv.

How does the German election work?

The latest poll increases pressure on Laschet who has seen his poll numbers decline steadily after he was filmed laughing during a visit to a flood-ravaged town in North Rhine-Westphalia last month.

Laschet serves as both the head of the CDU and as premier in North Rhine-Westphalia, leading many in Germany to find the gaffe particularly egregious.

Despite the recent slide, the conservatives still present formidable competition for the SPD and the Greens.

The latest poll numbers follow closely on the heels of Thursday's Forsa poll which showed the SPD ahead of the CDU/CSU alliance for the first time in 15 years.

In fact, the SPD's two percentage point gain compared to last week is the highest result the party has garnered in this poll since September 2017.

Why aren't more women in politics?

Who will be part of the next coalition?

The current coalition is made up of Merkel's CDU/CSU alliance and the SPD.

With the SPD now leading the polls, speculation is growing over who it may partner with if it wins the election on September 26. The party will likely require at least two coalition partners to form a government.

In a recent interview with Frankfurter Allgemeine Sonntagszeitung, SPD candidate Scholz said he would not rule out an alliance with the socialist Left party but did emphasize any German government must be committed to the NATO alliance.

By contrast, the Greens — who are still well-placed to be part of the next coalition — believe the Left has ruled itself out of any future government by virtue of its opposition to Germany's NATO membership.

Greens' candidate Baerbock told Funke newspaper group that the Left "was not even willing to support the Bundeswehr in rescuing German nationals and local forces from Afghanistan."

Laschet said at an event Saturday that both the SPD and the Greens have blocked measures to support the German military, or Bundeswehr, in the past.

Laschet also said he would make clear at Sunday's debate "where the differences are compared to the Red-Green coalition," referring to the SPD and Greens' party colors.