German election: Chancellor candidates face off over COVID, climate change and Afghanistan | German election 2021 – All the news, data and facts you need | DW | 29.08.2021 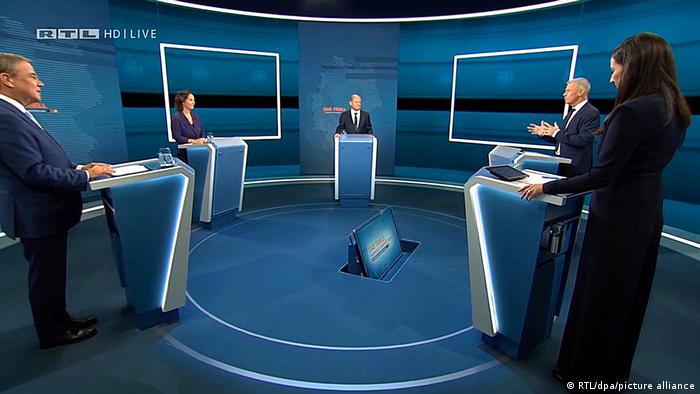 This showdown had been eagerly awaited. On September 26, Germans will go to the polls to elect a new government, which will not be headed by Angela Merkel, who is not standing for reelection after 16 years in office. Now the three candidates to replace her had to face live questions on prime time TV.

Recent opinion polls indicate that Merkel's center-right Christian Democratic Union (CDU/CSU), and its junior coalition partner, the center-left Social Democrats (SPD), are running neck and neck at 21% and 24%, with the Green Party not far behind. So three parties will likely need to join forces to get the necessary majority to form the next government. 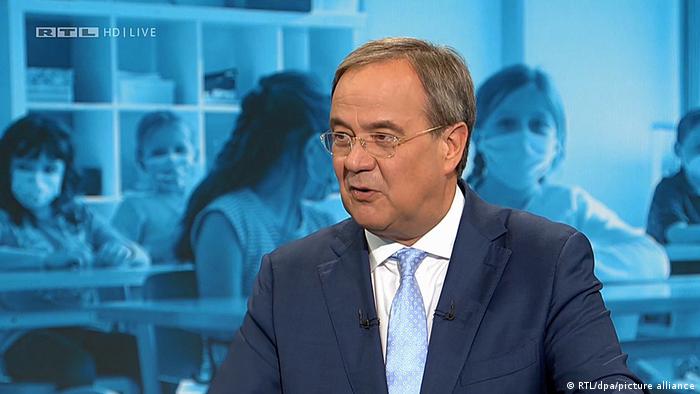 Therefore the three candidates for chancellor badly needed to score points: CDU/CSU candidate Armin Laschet is the Premier of Germany's most populous state of North-Rhine Westphalia and has been struggling in the polls.

And Annalena Baerbock, co-chair of the Green Party, has been trying to overcome the various hitches that she encountered in the early days of her campaign.

Barely five minutes into the TV debate, the three politicians clashed on the topic of Afghanistan. The controversy centered on the situation of the German armed forces, the Bundeswehr, which all three candidates see as underfunded and lacking adequate equipment.

Laschet was quick to rail against Scholz, accusing his SPD of having blocked the introduction of armed drones as a vital way of modernizing Germany's army.

Scholz retaliated by blaming the previous government of CDU and the pro-free market Free Democrats (FDP) that was in power until 2013, for cutting the budget of the armed forces and failing to invest in equipment.

During his time as Federal Finance Minister, Scholz claimed, he had pushed through the "biggest increase" in the Bundeswehr budget to now over €50 billion ($59 billion). 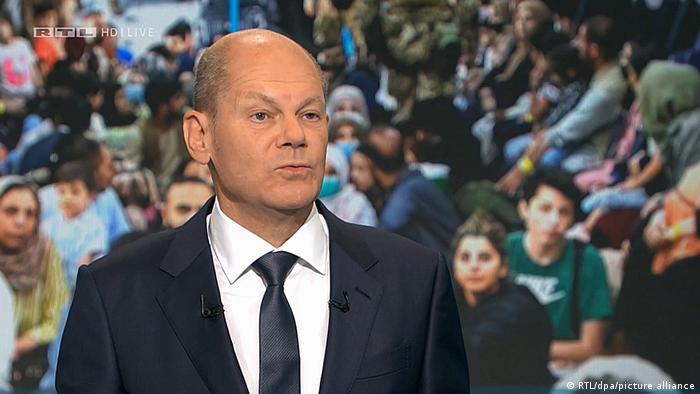 Olaf Scholz remained calm and unemotional throughout the debate

The Greens' Annalena Baerbock, however, who has never held government office,x was keen to point out what she sees as the current coalition's failings on Afghanistan.

In June, her party's motion to evacuate more local helpers of the Bundeswehr had been voted down by the ruling coalition, she pointed out. "It was a disaster that could have been seen coming."

On the issue of combatting the coronavirus pandemic, all three candidates stressed the importance of vaccination. They differed, however, on the topic of introducing compulsory vaccination, which only Baerbock did not rule out.

The three candidates were asked about COVID-19 restrictions on public transport: Should only people who have a negative COVID-19 test, or who have recovered from COVID-19 no more than six months ago, or those who have been fully vaccinated for two weeks or more be allowed on trains? Scholz and Baerbock were in favor of introducing this rule. Laschet refused to commit himself, arguing that the introduction of such a requirement might not be easy to implement.

Laschet regularly rejected accusations of mishandling the coronavirus pandemic in his state, where infections are especially high as the fourth wave of the pandemic sweeps the country. He had responded appropriately in the different infection situations, he insisted. 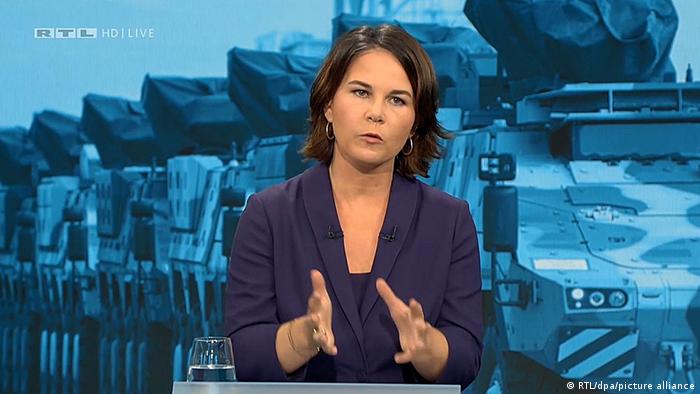 All three candidates vowed to push ahead with the expansion of renewable energy and climate protection — but their ideas differed on pace and methods.

Laschet and Scholz categorically rejected the idea of bans and restrictions.

"The path to a climate-neutral economy takes time," he argued. "What we have to understand is that this can't be done overnight."

"We have to get started now, pick up the pace, reduce bureaucracy, speed up procedures," Laschet said. In doing so, he argued, the government must rely less on bans and prohibition but rather rely on innovation.

Laschet accused the Greens of an anti-industry approach, warning that stricter regulations would push industry out of Germany. "The steel industry will migrate to India and to China," he warned.

Green Party candidate Baerbock criticized her opponents for being inefficient and dishonest. "To me, it really sounds frightening," Baerbock said. "You just don't want to ban anything because that might not go over so well in the election campaign."

Baerbock suggested significantly expanding renewable energies, proposed a ban on internal combustion engines from 2030, and an obligation to install solar panels on roofs of all new buildings.

"If we don't manage to commit the next federal government to climate neutrality, then we have a big, fat problem," she concluded.

The business-friendly conservative, Laschet, accused his center-left SPD and Green opponents of planning tax hikes that would be detrimental at a time when the country is seeking to recover from the coronavirus pandemic.

Scholz, however, insisted that for particularly high-income earners, a tax increase of 3% was absolutely conceivable. Baerbock agreed, stressing that, above all, taxes must be cut for low-income earners and single parents.

Baerbock accused Laschet of reading out pre-prepared notes, while Laschet accused Baerbock of trying to score points with populist phrases. Scholz, however, remained aloof and did not let himself be drawn into any heated exchange.

In a flash poll conducted by the pollster Forsa, 36% of the 2,500 respondents said Scholz had come out on top, 30% saw Baerbock in the lead and only 25% said the same for Laschet.

Live TV debates between the top candidates have become a fixture on German TV over the past two decades. They usually pit an incumbent head of government against his or her challenger. This year is different because, for the first time in German post-war history, there is no incumbent chancellor campaigning for reelection.

While these high-profile debates have come to been known as "duels," this year for the first time there are three candidates, so the term "triel" has been coined (it's not even in the dictionary).

There will be two more installments: On September 12 and then on September 19, the three will meet again for parts two and three of the showdown.

How does the German election work?