For the first time, one of Germany's famed motorways has been affected by a diesel ban. German cities have instituted or are bracing for bans on older diesel cars after violating European clean air laws for years. 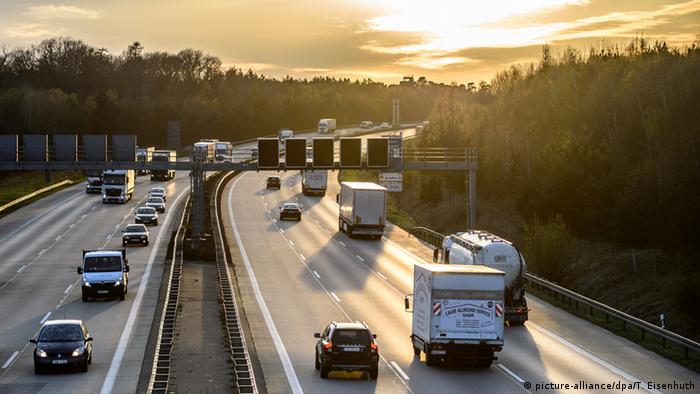 A German court ruled on Thursday that authorities must ban older diesel vehicles from parts of the western German cities of Essen and Gelsenkirchen and a busy motorway in the country's industrial heartland.

Several German cities, including Hamburg, Frankfurt and Stuttgart, have put in place or are bracing for bans on older diesel vehicles that emit higher amounts of pollutants than later models. The bans follow a ruling by Germany's top administrative court in February that held such bans legal.

The latest order comes just days after a court imposed diesel bans in certain areas of the western cities of Cologne and Bonn.

It's the first time that one of the country's famed autobahn highways has been affected. The court banned older diesel cars on sections of the heavily used A40 motorway, which runs through the Ruhr industrial region. The restrictions are expected to come into effect from July next year.

The Environment Ministry of North Rhine-Westphalia, the western state where the affected section of the motorway is located, said it plans to appeal the ruling.

Environmental groups have been suing local governments in German cities, which they say have been violating European clean air rules for years. The first diesel ban took effect in May in Hamburg.

The bans have hurt Germany's auto industry already reeling from the "Dieselgate" scandal.

Diesel car sales in Germany fell to 31.1 percent of the total in the first half of 2018 from 41.3 percent a year earlier.

In order to avoid more such bans, the German government has announced a series of measures including calling on automakers to offer generous trade-in rates to their customers to encourage them to buy new less-polluting cars.

On Thursday, the government agreed to tweak the existing law in order to spare cities that only slightly exceed limits on harmful nitrogen dioxide (NO2) from diesel vehicle bans.

Berlin wants to soften the threshold for implementing a ban from 40 to 50 micrograms per cubic meter. The decision has yet to be approved by parliament.

"The government is obviously in panic mode. Otherwise there would be no explanation for its rushing through an update to the law that infringes EU law in several ways," said Jürgen Resch, head of environmental pressure group DUH.

"We will secure the right to clean air in all cities in 2019; the courts will ignore the weakening of the thresholds," he added.

DUH plans to sue the federal government for breaking EU law if it presses ahead with the changes.

German government ministers met at Chancellor Angela Merkel's offices on Friday to discuss the vexatious diesel question. After years of wrangling, a solution is dearly sought, but what are the realistic options? (30.09.2018)

Angela Merkel has pledged to introduce legislation to stop "disproportionate" bans on diesel cars. The chancellor was speaking ahead of the state election in Hesse, where her CDU is desperate for a good showing. (22.10.2018)