Angela Merkel has pledged to introduce legislation to stop "disproportionate" bans on diesel cars. The chancellor was speaking ahead of the state election in Hesse, where her CDU is desperate for a good showing. 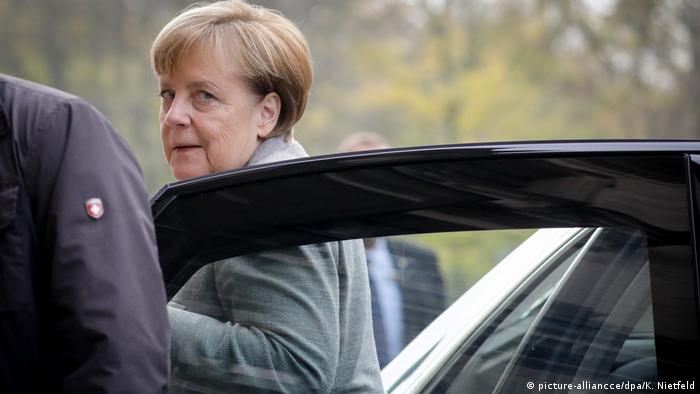 German Chancellor Angela Merkel has warned it would be "disproportionate" to ban diesel cars in cities where limits on nitrogen emissions are only being marginally exceeded.

Many drivers have been left outraged as a number of major German cities — including Frankfurt, Berlin and Stuttgart — have threatened to limit or ban older diesel engines from their roads.

The chancellor was speaking ahead of this week's election in the state of Hesse, where her Christian Democrats (CDU) are hoping to make gains in the regional government following a disastrous showing by their sister party, the Christian Social Union (CSU), in Bavaria earlier this month.

What is Merkel's proposed diesel law?

Diesel car emissions have raised nitrogen levels above the permitted level of 50 milligrams per cubic meter in several cities across Germany.

However, Merkel's proposed legislation would enshrine in law that diesel car bans are disproportionate in cities where there are only marginal excess nitrogen levels. In Frankfurt, for example, the nitrogen level stands at 57 micrograms thanks largely to a series of environmental measures, such as the introduction of cleaner buses.

Merkel said diesel car owners should not bear the costs of having their older diesel engines retrofitted with catalytic converters, which would reduce the amount of nitrogen emissions cars produce.

"We are on the side of owners of diesel cars and are clear that they should suffer no financial harm," she said. "We believe the car industry bears responsibility because it has massively undermined trust in it."

The German government recently announced a series of new measures designed to rein in pollution levels in 14 cities while averting an outright ban. One such policy would see citizens incentivized to purchase new cars.

The government also wants diesel car owners to have their engines retrofitted, although carmakers have yet to commit to such a plan.

Hesse's state leader sent out invitations to journalists to hear him speak after a conference with "Madame Chancellor."

A German state minister has warned that the omicron variant of COVID-19 has "very likely already arrived" in Germany. Mutations typical of the variant were detected in a traveler returning from southern Africa.