German ambassador on migrating to Europe: ′Think twice about it′ | Asia| An in-depth look at news from across the continent | DW | 16.11.2015

Germany's Ambassador to Afghanistan, Markus Potzel, talks to DW about a new media campaign from the German government designed to raise awareness among Afghans seeking to embark on perilous journeys to reach Europe. 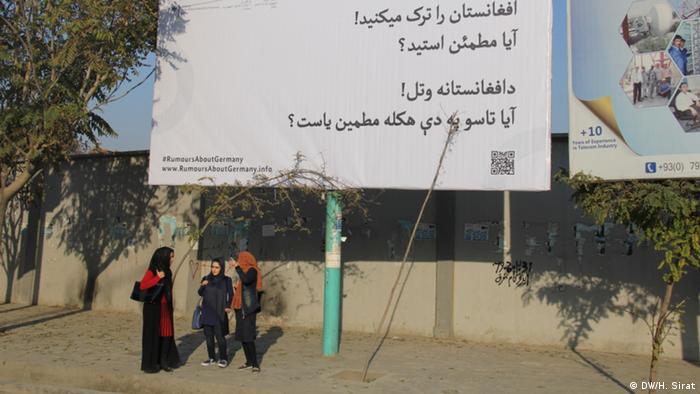 Tensions resulting from the recent unabated influx of migrants into Germany have led the EU nation to look for ways to stem the stream of people coming into the country.

To that end, the German government not only plans to deport migrants whose asylum applications have been rejected, but also raise awareness through media campaigns about the dangers involved in undertaking risky journeys to reach European shores.

In Afghanistan, the German embassy has launched such a campaign aimed at dispelling rumors about reception conditions in Germany. A couple of posters appeared on Sunday, November 15, in Kabul using slogans in both Dari and Pashto, the country's main languages, that read: "Leaving Afghanistan? Are you sure?" (main picture) and "Leaving Afghanistan? Think about it again." The billboards include a hashtag and a link to a Facebook page from the German embassy called Germany in Afghanistan with information on migration laws, among other posts.

In a DW interview, Markus Potzel, Germany's Ambassador to Afghanistan, says the campaign is not aimed at deterring Afghans from coming to Europe, but rather at informing potential migrants of the risks involved in fleeing and illegal migration.

DW: What is the goal of this campaign?

Ambassador Markus Potzel: We want our campaign to reach those in Afghanistan who are considering fleeing to Europe, and especially Germany. 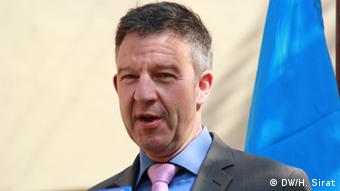 Ambassador Potzel: 'It's not about deterrence, but rather about clarification - especially about the risks involved with fleeing and illegal migration'

We want to tell them: Do not believe any rumors or deliberately spread false information about the supposedly simple life in Germany. Think twice about whether you really want to sell all of your possessions to pay criminal smugglers and risk your life on the journey.

Really think about if you truly want to leave your home, your family, and your friends behind for an uncertain and dangerous future far away from your homeland.

The campaign has two elements: Starting mid-November, we will place posters in select locations around Kabul - and eventually in Mazar-e-Sharif and Herat - that will exactly ask people this question: Have you really thought hard about leaving Afghanistan?

Secondly, we will support the poster campaign by refuting the most common rumors and transfigured representations of reception conditions in Germany on social media and using the URL:www.RumoursAboutGermany.info.

It's not about deterrence, but rather about clarification - especially about the risks involved with fleeing and illegal migration, as well as the legal framework and the reality of life in Germany.

We firmly stand by our engagement in Afghanistan, and we are committed to the country's stabilization and reconstruction. It is crucial, however, that the Afghans do not turn their backs on their own country during these difficult times, but rather help build the future. 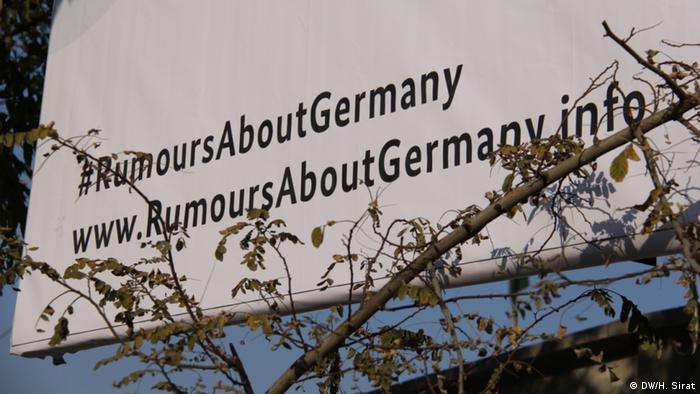 The posters are set to be hung in Kabul, Mazar-e-Sharif and Herat. Does the German government view them as "secure areas" where Afghans could be deported to after having their asylum applications rejected? What criteria are used to define these zones?

When selecting locations for the campaign, we solely focused on places where we could reach the most people. That alone is the focus of our campaign, which is why we are backing up our posters by raising awareness on social media and the Internet. The Facebook page of the German Embassy in Kabul already has over 100,000 followers.

Most people only see Afghanistan through the horrible images of attacks, murders and fighting published by the media. When looking at these pictures, it is easy to forget that the vast majority of people in Afghanistan are leading normal lives and are more concerned with the problems of day-to-day life - such as how they will feed their families - than with security issues.

We are therefore not focusing on "secure areas," but rather on the overall security situation throughout the country. But, of course, we will only repatriate migrants whose asylum requests have been rejected to areas that, we believe, pose no immediate danger to life and limb.

Who is responsible for providing security in these "safe areas?"

The Afghan government is solely responsible for providing security in the country since the end of the ISAF mission.

In recent months, Afghan security forces have done an excellent job under very difficult conditions - an achievement which deserves our admiration.

There have been setbacks - like in Kunduz - and there will certainly be more in the future.

But we are confident that the Afghan security forces will be able to cope with these challenges with our support.

With this goal in mind, we will likely extend our participation in the training and advisory mission "Resolute Support" in December.

When repatriated Afghans return to Afghanistan, what sort of re-integration measures can they hope to receive?

Approximately 40 percent of Afghan asylum seekers are currently being accepted in Germany. Those who cannot present a credible case of persecution will be sent home. This measure complies with both German and international law which states that those who are rejected are obliged to return to their country of origin.

This year, Afghanistan is set to receive around 100,000 refugees returning from Pakistan and Iran, while several million have returned since 2001. This presents such a challenge, that the Afghan government has already formed its own ministry to cope with the returnees.

How can Germany help with the re-integration measures?

Germany is already engaged with reintegrating refugees returning to Afghanistan from Iran and Pakistan. Currently, we are speaking with the Afghan government about how we can combine our efforts to stem the flow of migration out of the country and reintegrate those emigrants who are returning.

We have supported Afghanistan for many years to a considerable extent; within this framework, we will certainly find further opportunities to contribute to reintegration efforts.

Opinion: Refugee policy - get hold of your heart and use your head

German politics with a heart, was there ever such a thing? Yes, Merkel proved it. But now she has a problem. Pushback against Germany's "welcome culture" is growing. Now we need reason, says Volker Wagener. (12.11.2015)

The German government has decided to offer Syrian refugees protection in Germany but to send home more Afghans. German human rights NGO Pro Asyl is accusing the government of restricting the right to asylum. (08.11.2015)

Fleeing from Taliban: Refugees in Bavaria