German addiction study: Alcohol and tobacco use down, but not by much

Though alcohol and tobacco consumption have both dropped, Germans remain among the leading consumers in the developed world. Authorities are also worried about the rise in citizens addicted to gambling. 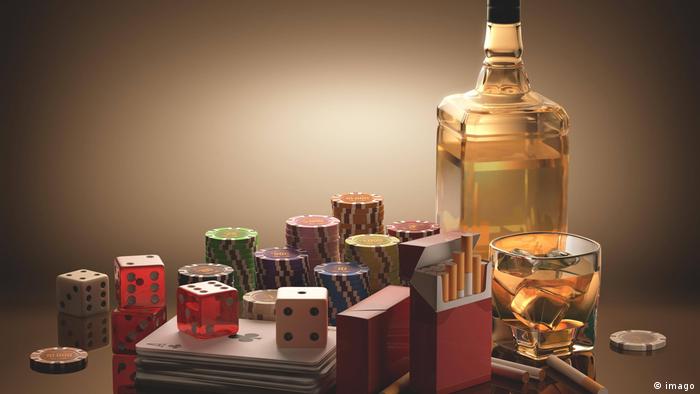 The German Central Office for Addiction Issues presented its latest report in Berlin on Wednesday, and despite two-percent drops in the numbers of citizens addicted to alcohol and tobacco, the authors said there was still cause for alarm.

The study found that Germany remains one of the most-addicted societies in the world.

The study found that in 2017 — the latest year for drinking statistics — Germans drank some 131 liters (34 US gallons) of alcohol, roughly the capacity of a bath tub. The report found that 7.8 million Germans between the ages of 18 and 64 were high-risk drinkers.

The negative effects of drinking are underscored in healthcare and crime statistics. Accordingly, some 74,000 annual deaths are related to alcohol, or alcohol and tobacco. Roughly 21,700 youths between the ages of 10 and 12 were treated at hospitals for alcohol poisoning in 2017.

Police statistics also showed that 231,300 crimes were committed by people under the influence of alcohol — roughly 11 percent of all crimes committed in the country for the year.

To counter that trend, the authors have called on lawmakers to limit alcohol advertising, make it more expensive, and raise the legal drinking age to 18.

Roughly a third of Germans are still smokers, and although fewer smoked cigarettes in 2018 (down 2 percent) more smoked cigars and cigarillos (up 6.5 percent), and pipes (up three percent). The report claims that almost 13.5 percent of all deaths in Germany are smoking related.

The annual report also found that between 1.2 and 1.5 million Germans, many of whom are women and/or elderly, were addicted to opioids. A further 300,000 to 400,000 were said to be addicted to other pharmaceuticals.

One of the major focuses of this year's report on addiction was gambling. Despite the fact that Germany has relatively restrictive laws on gambling, the domestic market continued to see rising profits. In 2017 the German gambling market raked in some €46.3 billion, with almost 58 percent of that cash coming from slot machines.

The report stated that 180,000 people in Germany were addicted to gambling, with another 326,000 having a serious problem with it.

Although online poker, casino, and lottery games are technically illegal in Germany, advertising is prevalent and many people access sites to play. The authors have called for advertising bans for gambling as well as more oversight.

Ilona Füchtenschneider, chairwoman of the Association for Gambling Addiction, said, "Addiction experts unanimously agree that online gambling represents a major risk." She said one of the main problems is that advertising for such sites gives the false impression that it is legal, when, in fact, it is not.