Germany Set to Ban Online Gambling as of January | Business| Economy and finance news from a German perspective | DW | 28.12.2007

Germany Set to Ban Online Gambling as of January

Germany is set to prohibit online gambling starting on Jan. 1. While legislators see the ban as a pillar of consumer protection, critics say the accord only serves to protect the state monopoly on lotteries. 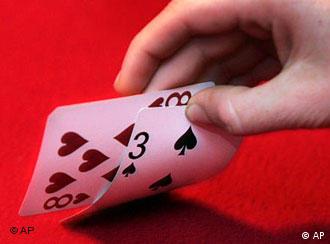 All 16 German state legislatures voted by mid-December to approve the new law which seeks to prevent any form of Web-based gambling or brokering of games over the Internet.

Internet betting companies and lottery brokers like Bwin Interactive Entertainment, Fluxx and Tipp24 have criticized the new regulations and claimed that the ban is contrary to law.

Tipp24 has said it will pursue a lawsuit if necessary, while Bwin already sued four German states in October seeking to continue offering online bets after the rules come into effect. The cases are pending. 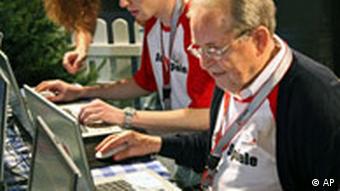 These men merely enjoy card games with the computer

Bwin operates a betting site under a license issued by the former communist East German government before unification and another portal under a Gibraltar license.

The company has said that both of those licenses prevail over the new online-betting ban and stressed that it would continue to operate its sites.

The European Commission, the EU's executive arm, has called on Germany to reconsider the complete ban on online betting. In April, Germany rejected the demand, claiming that citizens must be protected from the dangers of gambling.

The commission has the power to sue any EU member state to force them to comply with EU law.

Until now, 13 of Germany's 16 states have submitted the ratification documents for the ban to take effect, creating the required majority. The other three states are expected to submit their papers by New Year's Eve.

The new law will also prohibit the advertising of gambling over the Internet and on television; specifically, advertising in print and other media may only "inform" people about betting possibilities, and may no longer "directly invite, incite or prompt" customers to play.

The first European Poker Tour event will be staged in Germany in March. Not surprising, as poker is booming here. The game has become hip and popular on TV. But critics warn it could encourage gambling addiction. (25.02.2007)

Austrian-based online bookmaker Bwin faces complete closure of its German business after the eastern German state of Saxony revoked its licence. Bwin officials have said they will fight the decision. (10.08.2006)

Betting to Win Billions in the Grey Zone

Germany and the world are still caught up in soccer fever. But there's another, not exactly legal sport that's currently stirring up passion among more and more fans in Germany: sports betting. (05.07.2006)

Should online gambling be banned? Please include your name and country in your reply.