The small German Bavarian Alpine town of Garmisch-Partenkirchen is playing host to the leaders of the world's largest economic powers. Read the latest news to come out of the G7 here. 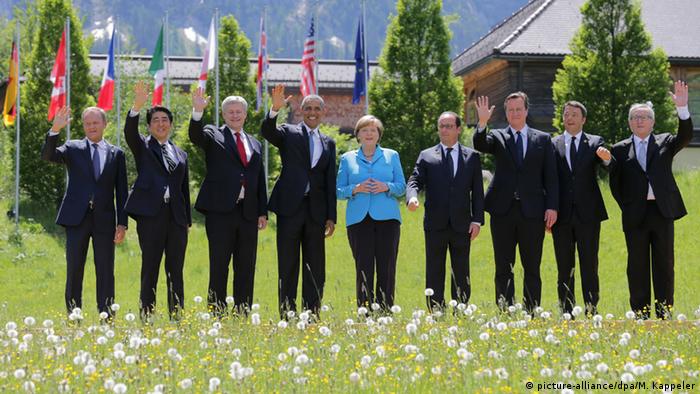 1642 UTC A look at the police presence deployed in Bavaria over the weekend.

The UK's David Cameron confirmed that he found the meeting productive.

1604 UTC Barack Obama seems to have found the meeting productive so far.

And it looks like he has enjoyed his stay, too.

1533 UTC News agencies and televised reports seem to confirm the announcement by Bavarian police. The Associated Press reported that about 400 protesters were heading back down the hill after failing to breach the security barrier and take their message to the powers inside.

"We didn't make it in, but I think we sent a message that the world leaders are hiding from the people," Micha Schmid told the AP. But, he added, "this was definitely the most beautiful protest I've ever been to."

Police had stopped the protesters on their way up the hill Sunday afternoon, with DW's Sabrina Pabst reporting that Obama and Co. were just meters away.

1520 UTC According to police, the demonstrations are over. Move along, folks.

1453 UTC Protesters and police held their own minisummits while the higher-level talks were continuing.

1445 UTC As always, commerce, including pushing for free trade deals, will figure high on the G7 agenda. But, this year, the German hosts are also pushing for the creation of a "Vision Zero Fund," which would ensure compliance with safety standards in supply chains as outlined by the International Labour Organization. Jörn Kalinski, Oxfam's director of advocacy and campaigns, told DW’s Naomi Conrad that such a fund "would be a very big and important step forward.We should really end this perverse situation where we have our economic prosperity based on human rights violations and ecological sins committed in the developing world." But he admitted that he was "a little pessimistic" that the initiative would receive much concrete support from the other G7 countries, because there was such a strong lobby interest from multinational companies at home.

1409 UTC The leaders have gathered around the table to discuss the bottom line.

1315 UTC An intimate look at the intimate seating arrangements in the room where leaders are now meeting.

1310 UTC According to the White House, US President Barack Obama and German Chancellor Angela Merkel discussed the civil war in Ukraine earlier Sunday and agreed that sanctions on Russia should remain until the "full implementation" of an agreement to end the conflict, which the leaders and their allies say Russia has fueled by supplying arms and manpower to the separatists.

1305 UTC Nigeria and Senegal’s presidents have now both landed in Munich, DW's Naomi Conrad reports. They’re part of tomorrow’s so-called outreach program, in which G7 leaders are set to discuss threats from groups like the "Islamic State" and Boko Haram. Also present will be the leaders of Tunisia and Iraq. This is to be followed by a second session focusing on the post-Millennial Development Goals, financing for development and health, including lessons learned from the recent Ebola outbreak.

1230 UTC DW's Naomi Conrad just caught up with Geeta Bandi-Phillips from World Vision on the sidelines of the summit. She was optimistic that G7 would put its force behind development and pushing for new global development goals. "I know this G7 is not going to be a pledging conference for post-2015 stuff," she said. "But it’s a good place to start thinking about how they could make sustainable development a reality for everyone else."

1150 UTC - Presenting a united front, leaders from the seven largest economic powers gathered for a group photo with the Bavarian Alps in the background. 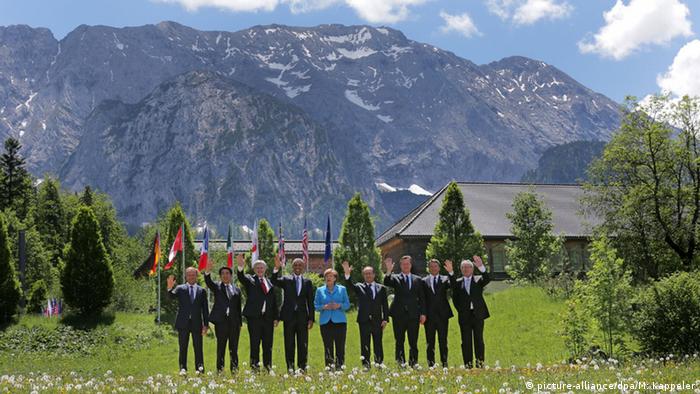 The photo was moved to earlier in the day because of expected bad weather.

In the words of the Associated Press: "The leaders of Germany, Britain, France, Italy, Japan, the US and the European Union posed for photos Sunday in a sun-soaked, flower strewn Alpine meadow in the Bavarian Alps before getting down to work. Germany Chancellor Angela Merkel, in a light-blue pantsuit, stood out at the center of the group among her dark-suited male colleagues."

1130 UTC - European Council President Donald Tusk said people protesting against the G7 is a sign of a healthy democracy.

Tusk added that the gathering of leaders from the seven member countries is "the best guarantee" that freedom and pluralism will survive.

Anti-capitalist and other protest groups have gathered to demonstrate against the summit, but have been kept at a distance by German and Austrian police.

Members of the anti-poverty group One set free balloons bearing the faces of the Group of Seven leaders, urging them to stick to committments to fight poverty across the globe.

Adrian Lovett, a member of the group, said that "we want their discussions here in Schloss Elmau to be much more than hot air." 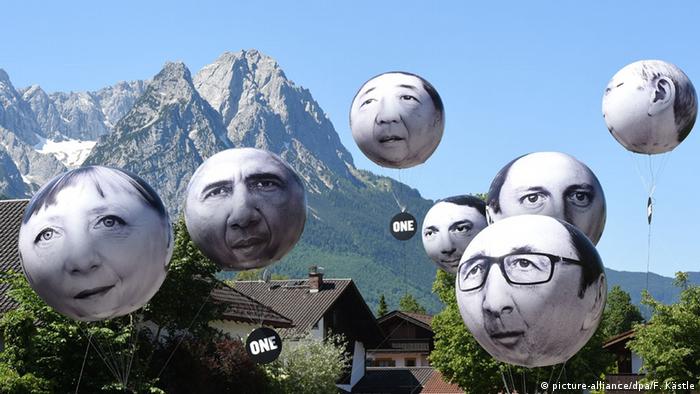 1114 UTC - Germany's Federal Press Office estimates that between 3,000 and 4,000 accredited journalists will cover the summit from the official press center in nearby Garmisch-Partenkirchen.

Meet the DW team on the ground in Garmisch-Partenkirchen: Naomi Conrad, Sabine Kinkartz and Henrik Böhme.

The biggest cost comes from lodging and feeding 17,000 German police officers. Vienna has also provided 2,100 police officers as the summit hotel is reachable by foot from Austria.

1048 UTC - Police have been deployed to Garmisch train station to wait for G7 protesters.

1020 UTC - After a long hike, about 200 protesters have reached the G7 Summit security fence. 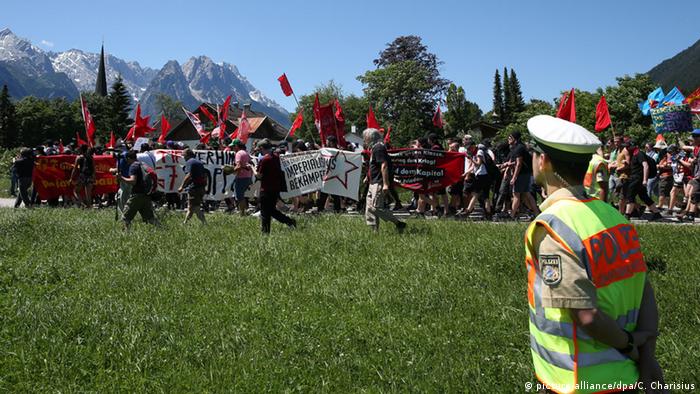 The group shouted slogans like "Freedom and peace - no more G7!" and were carrying signs with slogans like "Politics for people, not markets." 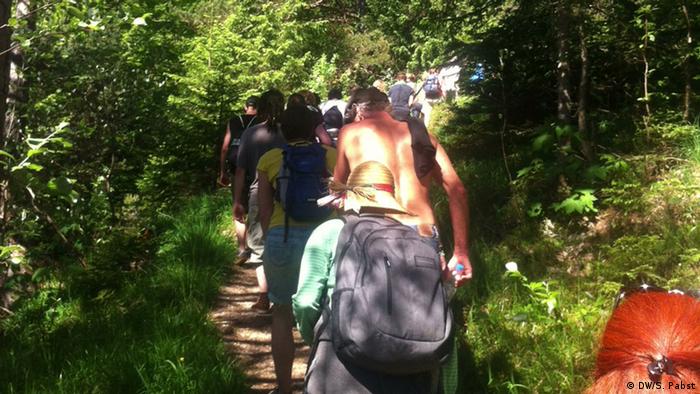 As they made their way toward the perimeter, a few scuffles with police broke out. No arrests or major incidents were reported.

In the days leading up to the summit, a number of protests were held by those who believe the leaders' decisions favor banks and big business.

A planned trans-Atlantic free trade agreement has many protesters worried.

Juncker said he was "disappointed" by the prime minister's speech. While Tsipras presented EU discussions as "take-it-or-leave-it" offer, according to Juncker, he did not tell his own parliament that the EU was ready to discuss key stumbling blocs like basic pensions.

"Alexis and Tsipras and I are friends, but, in order to maintain that, one must observe minimum rules."

Asked whether there was a final deadline for Greece to avoid a "Grexit," or losing the euro as its currency, Juncker said that "for sure there is a deadline," but he refused to specify when.

For all the details of what Tsipras said in parliament on Friday, click here.

1010 UTC - Many locals in Garmisch-Partenkirchen and the surrounding villages were forced to close their shops and pubs during the G7 summit.

A local resident told DW that she understood the security concerns, but that many were losing money. "It's such a sunny weekend, normally we'd make loads of money."

1000 UTC - UK Prime Minister David Cameron, who tweeted Saturday that world leaders needed to stand up to corruption, has arrived at Munich airport.

On his arrival in Bavaria, Cameron reiterated his comments from Saturday, saying he wants the G7 to show a united front against Russia and for sanctions to be rolled over. 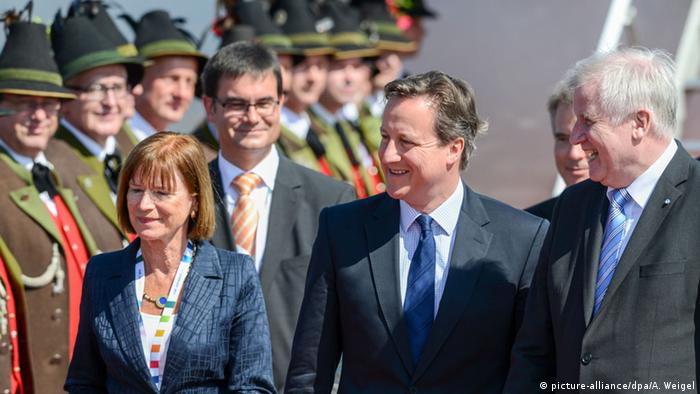 0945 UTC - US President Obama calls the current partnership between Washington and Germany "one of the strongest alliances the world has ever known."

Ties between the Cold War allies deteriorated in recent years after revelations of widespread surveillance of German citizens, including Chancellor Angela Merkel's phone, by the US National Security Agency.

0925 UTC - As villages cheer and take photos, Obama and Merkel, and are their entourages, leave the small village of Krün, heading to Elmau to greet the other leaders.

0915 UTC - With 45 minutes to go until the summit's official opening, Obama told the crowd that G7 leaders would discuss how to best stand up to Russian "aggression" in Ukraine as well as threats from extremism.

"So, over the next two days in Schloss Elmau, we're going to discuss our shared future, the global economy that creates jobs and opportunity, maintaining a strong prosperous European Union, forging new trade partnerships across the Atlantic, standing up to Russian agression in Ukraine, combating threats from violent extremism to climate change."

0904 UTC - Obama tells local residents who joined him for a traditional Bavarian breakfast of white sausage, mustard and pretzels that "there is never a bad day day for a beer and a weisswurst." 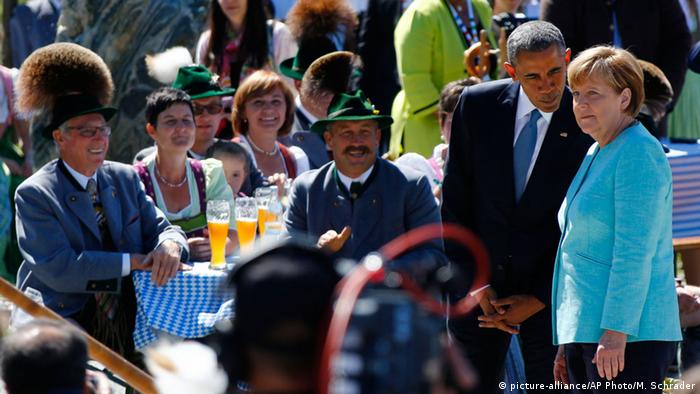 Obama told the crowd, "I forgot my lederhosen, but I'm going to see if I can buy some while I'm here."

Lederhosen are leather shorts, often worn with suspenders, that are a traditional outfit worn by Bavarian men. 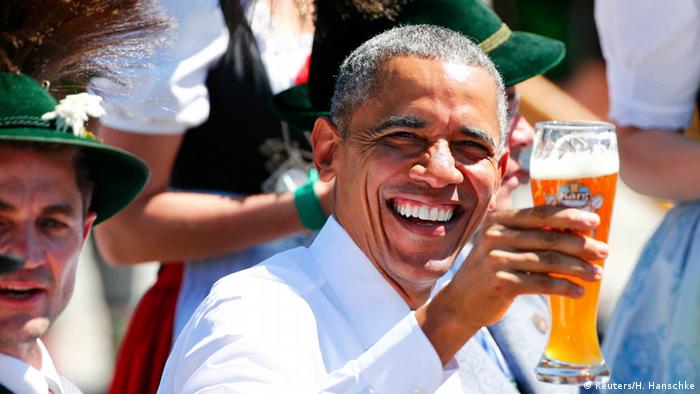 0838 UTC - US President Barack Obama arrives in the small Alpine village of Krün.

0827 UTC - DW reporter Naomi Conrad, who is in Garmisch-Partenkirchen, reports that journalists are being kept at arms length from where the talks are taking place.

0820 UTC - DW reporters were unable to get to Elmau, where the summit is set to get under way at noon (1000 UTC) Sunday because of road blockages. They were forced to take a helicopter to the area. 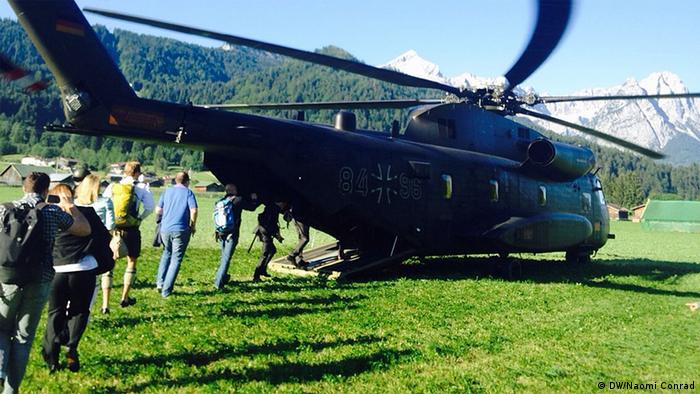 0812 UTC - Protesters are sitting on the road leading to the luxury hotel (pictured above) where the Group of Seven is expected to meet later on Sunday.

Police have blocked the protesters from moving further toward Schloss Elmau.

Bavarian police announced on Twitter that there were 12 protesters blocking the way. Seven demonstrators left voluntarily, while five were dragged away.

Sunday, 0800 UTC - Despite protests leading up to Sunday's opening, leaders of the world’s most industrialized nations begin their two-day summit at the luxury Emlau Schloss resort in the Bavarian Alps.

The Group of Seven leaders have begun arriving in the Alpine town, with US President Barack Obama greeted at the Munich airport. 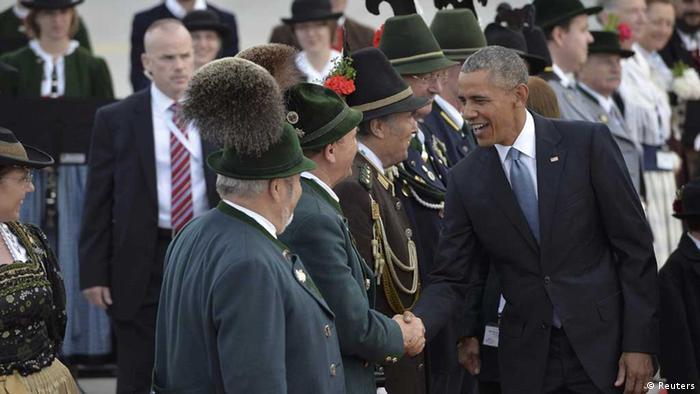 Merkel and the heads of Britain, Canada, France, Italy, Japan and the United States will consider a wide range of issues during the meeting which will include the state of the global economy, terrorism, poverty and climate change among others.

The standoff between Greece and international creditors is also on the agenda.

Germany's Angela Merkel and French President Francois Hollande have spoken to Greek Prime Minister Alexis Tsipras to discuss the debt crisis. The deadline to reach a deal runs out at the end of this month. (06.06.2015)