Thousands of demonstrators took to the streets in the Alpine resort of Garmisch-Partenkirchen, where G7 leaders are meeting on Sunday. As Naomi Conrad reports, peaceful protests turned into skirmishes. 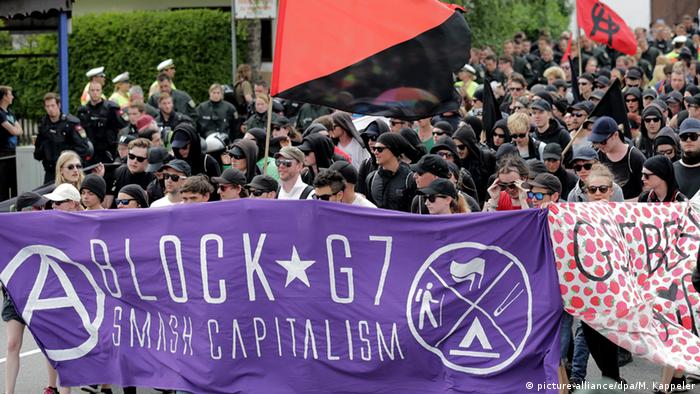 The petite, elderly woman with the shocking pink t-shirt and matching lipstick surveyed the group of policemen in riot gear marching past her house in Garmisch-Partenkirchen on Saturday afternoon. She shook her head and sighed. She completely understood, she said, that people wanted to protest. But now her local pub had closed, because the owner was afraid the protests might turn violent. "And that's kind of annoying," she sighed.

She was about to wander off, when one of the 3,000-odd journalists gathered in Garmisch-Partenkirchen for the summit barged up to her and shoved a microphone in her face: Was she afraid, he asked, somewhat breathlessly. "Nah," she replied, "why?" 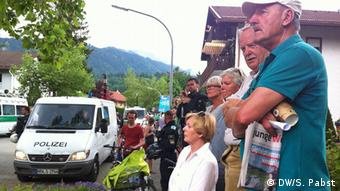 She, that much was clear, wasn't particularly fussed about the thousands of protesters who had descended on the tranquil skiing resort of Garmisch-Partenkirchen, nestled among lush fields under towering snow-capped mountains close to the Austrian border. The 19,000 policemen guarding the town, most of them decked out in riot gear, cordoning off roads and buildings, were a mere inconvenience to this resident.

As small groups of protesters, many clutching banners and flags demanding that "G7 go to hell" or "TTIP kills," filed past the police vans, Christoph Schott, the smartly dressed spokesman of the NGO Avaaz sauntered up. He gestured to a group of activists in green space-suits wearing the masks of the seven leaders of the G7 nations - United States, Britain, Canada, Italy, France, Japan and Germany - posing for several cameramen. His group supported the G7, he said, and they were here to call on the delegations to include a complete decarbonization of energy by 2050 in the summit's communiqué, which will be released after the two-day meeting in the Elmau Castle.

Climate, though, is only one many topics on the agenda: Leaders are set to discuss such wide-ranging topics as global trade, global supply chains, the new Millennium Development Goals, international terrorism and the myriad crises in the Middle East, Ukraine and the South China Sea. Other topics include the EU-US trade agreement TTIP, lessons learned from the Ebola crisis and neglected tropical diseases. The Greek debt crisis is also likely to form part of the discussions. 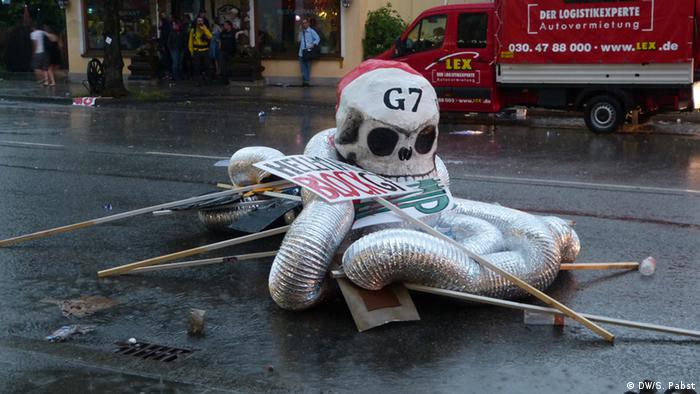 Standing in the boiling midday sun on the square outside the main train station, where protesters were gathering for the anti-G7 march, Alice, a spirited 18-year-old with bright purple-and-green dreadlocks and covered in piercings, admitted that she didn't really know what was on this year's agenda. She shrugged: "It's all about multinational companies anyway and the leaders couldn't care less about people." Her boyfriend Nico nodded: They were anarchists, he said gravely, and his message to Merkel was that she should resign, "the sooner the better." But, he added, he hoped the protests would remain peaceful.

In the past, anti-G7 protests, which attract a wide-range of anti-capitalist movements as well as environmental and human rights activists, have turned violent, leading organizers to choose ever more isolated spots to avoid mass demonstrations and violence in cities.

Alice and Nico hastened off to the join the protesters clutching huge banners calling for "solidarity with Kobane," chanting "Stop G7, hey, hey, hey," while an elderly woman from Garmisch-Partenkirchen waved a piece of cardboard entreating them to "be peaceful." The owner of the local ice cream parlor carefully locked his shop, as three Hare Krishna monks in orange sarongs danced past.

As locals gazed down from their wooden balconies at the protesters filing past, guarded by policemen in riot gear, a chubby, sunburned policeman turned to a woman looking on. "Not something you see every day, huh?" he said. The woman shrugged, then grinned. 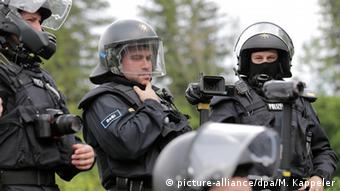 Police responded in numbers to the first sign of trouble

But as the motley group of protesters, some 36,000 according to the police, reached the police barricades blocking off the road to Elmau Castle, skirmishes broke out. It put an abrupt end to an impromptu theater production featuring protesters wearing masks of Merkel and Obama. As tear gas wafted above the photographers pushing to get closer to the melee, a breathless self-declared spokesman said that a group of demonstrators had tried to make a dash for the barricade and police squads had immediately intervened. According to a police spokesman, at least seven policemen were hurt during the protests.

Medics rushed past carrying a woman on a stretcher, as more police units appeared from a nearby house. Finally, organizers told protesters to turn back, reminding them that "tomorrow is another day."

As protesters raised their fists and slowly shuffled back to their starting point, chanting "there's blood on your hands," a harried-looking policeman dabbing the sweat from under his visor said he'd had enough: "I really can't say this is fun." But, he added, things could have been a lot worse: "It's still all within limits." Then he had to make a dash, as yet another skirmish broke out.

Back by the train station, small groups of protesters, their banners rolled up, wandered past the closed ice-cream parlor, as rain began to fall and the snow-capped mountain peaks were shrouded by ominously dark clouds.

Expectations are high ahead of the G7 summit in Germany. Chancellor Angela Merkel told DW what she hopes the talks will achieve. And she said absent Russia still had a vital role to play, particularly in Syria. (05.06.2015)

Left-wing protesters have rallied in the German alpine town of Garmisch-Partenkirchen ahead of the meeting of world leaders. Police says they have already come under attack. (06.06.2015)