Members of the anti-Islam PEGIDA movement have vented their anger in Cologne at Germany's migrant policies, clashing with police and counter-protesters following a series of New Year's Eve sexual assaults and robberies. 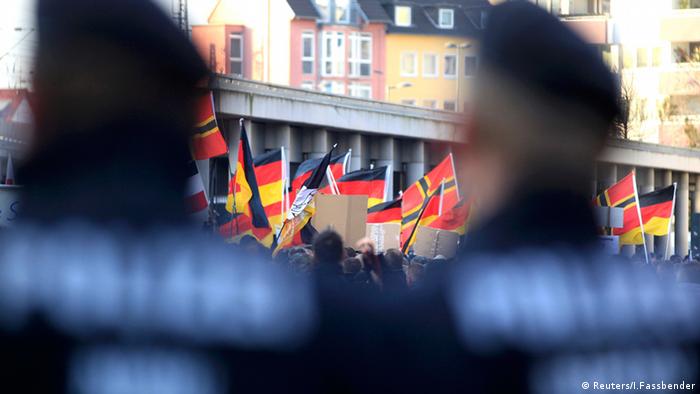 Police on Saturday brought out water cannons to subdue protesters outside Cologne's main train station after bottles and other objects were hurled at officers. It's the latest protest in the city to turn violent amid participation by right-wing groups, highlighting tensions as Germany struggles to cope with a huge influx of migrants.

Nearly 400 women have now reported being the victims of various crimes on New Year's Eve perpetrated by large groups of men, many of whom are now believed to be among those seeking asylum in Germany.

Much has happened in the city since those crimes, including the dismissal of Cologne's head of police and Chancellor Angela Merkel's backing of faster deportation for migrants who commit crimes in Germany. Saturday's extremely tense demonstrations outside the train station saw altogether more than 3,000 participants.

"When will people understand that this is not about refugees? This is about us women, who live under this threat of sexual assault on a daily basis," a female protester at the anti-PEGIDA group told DW. 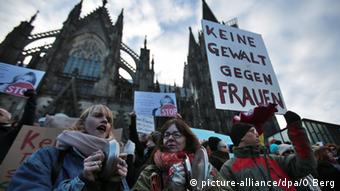 "PEGIDA are now using these attacks for their own political intentions, but they don't really care about us. They never did," she said, holding a sign calling for an end to racism, sexism and discrimination.

Hundreds of women, activists and anti-PEGIDA protesters gathered at noon at the rear of the train station, completely separate from where the PEGIDA demo was due to take place.

Earlier, a flash mob of about 300 people took place right outside Cologne's famous cathedral, with women, men and children calling for an end to racism and violence against women. For a moment there it seemed as if the city had kept its renowned liberal and accepting approach.

Still, something in the air was different. Even people who consider themselves left-wing weren't entirely sure which side to take during the demonstrations, as one protester said.

"I am here to show that I am absolutely against racism and fascism, but also to say out loud that these assaults must never occur again. I want the women of Cologne to know that we stand for them, that they have our support. This is not the usual nature of this city." 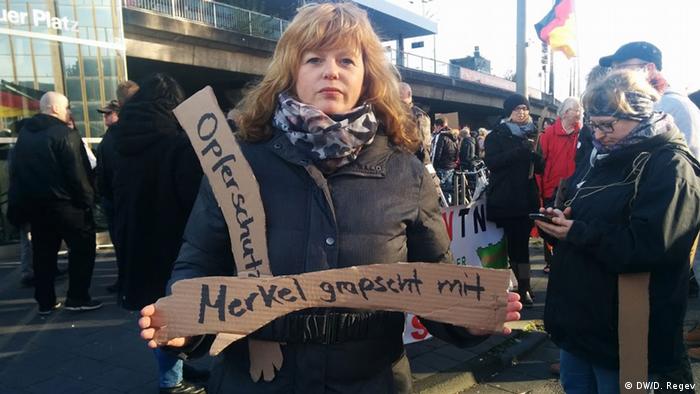 "I doubt that Germany is capable of handling the problems that refugees bring with them:" PEGIDA protester Petra Stahl

On the PEGIDA side, many came from as far away as Hanover and Mainz to express solidarity with the people of Cologne. "I doubt that Germany is capable of handling the problems that refugees bring with them," said PEGIDA protester Petra Stahl.

Merkel is to blame, she added, claiming that on top of having social problems with asylum seekers, Germans are paying with their taxes to help fund refugee homes and social welfare programs for the nearly 1.1 million migrants who arrived in the country last year.

"This cannot continue. Angela Merkel must go," she said. 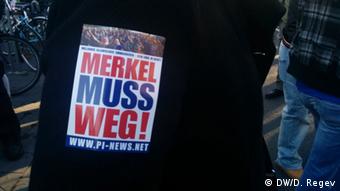 Many protesters called for Merkel to step down

Cologne is considered to be a very liberal city, even by German standards. Its people are often mocked for being too cheerful, sometimes even a bit silly, especially during the traditional Carnival celebrations that take place every year in the weeks leading up to Easter.

"The Carnival is going to be very heavy this year," said a man who came to show solidarity with demonstrators from the women's groups, who preferred to remain anonymous. "I was here on Christmas Day, too, at the central station, and the same thing happened."

According to him, people who spoke Arabic were assaulting and harassing women during the Christmas holiday, but it escalated to such a scale during the New Year's Eve festivities that now people "have had enough."

He told DW that he is not against refugees in general, but people needed to make it perfectly clear that these things cannot happen in Germany. "Most refugees just want peaceful lives, and this group of assailants is ruining the reputation of all the rest," he added. 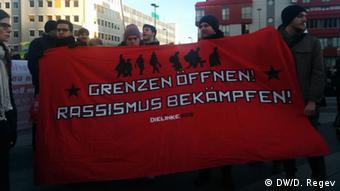 At least 1,300 counter-demonstrators showed their support for migrants, speaking out against racism

'We have had enough!'

During the demonstrations, which lasted more than four hours, people seemed extremely divided. Although it wasn't the first time PEGIDA and its supporters had demonstrated in Cologne, along with counter-protesters, this time participants felt that certain boundaries had been crossed.

"I'm not saying all foreigners should be deported, but I definitely think the criminal ones should, yes," a PEGIDA protester said, carrying a sign which read "Criminal foreigners out!"

"To me, it simply doesn't make sense that Germany will keep on bringing them and supporting them if they are committing criminal offenses here. No other country would tolerate that," the protester said.

But many others feel that these statements are only being used to promote a political agenda - and for this, they are not willing to remain silent. "We have had enough of this. We have attacks on refugees' homes almost every day the same way we face sexual harassment and violence almost every day," a women's rights activists told DW.

"The New Year's Eve attacks were despicable, but we will not let PEGIDA people shift the focus to refugees, as if they themselves don't harass and don't abuse. And if it means filling this normally quiet city with protests - so be it."