Police in the western German city of Cologne have broken up a protest by the "anti-Islamization" group PEGIDA. Water cannons were used to disperse demonstrators protesting after the New Year's Eve attacks on women. 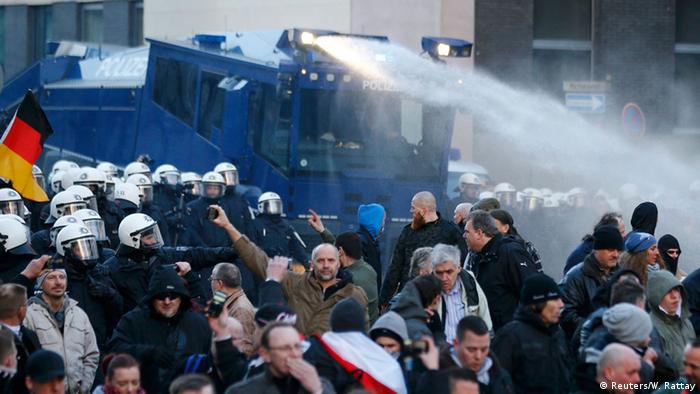 Police on Saturday moved to disband the crowd of protesters in the inner city after bottles and crackers were thrown at officers.

DW reporter Dana Regev confirmed that water cannons were used amid clashes between anti-migration demonstrators and their opponents.

The North Rhine-Westphalian chapter of the anti-migration PEGIDA group and far-right organizations called the demonstration in the wake of a series of sexual assaults and robberies targeting women in the inner city of Cologne on New Year's Eve. Police said on Saturday they had received 379 complaints so far, with some 40 percent having to do with some form of sexual harassment.

Eyewitnesses said most of the offenders looked to be of North African or Arab origin. The incidents have fueled xenophobic sentiment in some quarters of German society, as the country struggles to cope with a huge influx of refugees and migrants, most of them coming from the Middle East and Africa.

The demonstrators protesting against Germany's current refugee policies, who numbered some 1,700 people according to police estimates, were confronted by an estimated 1,300 counter-demonstrators, who also gathered near the train station.

More than 2,000 state and federal police were tasked with keeping the two groups apart.

Several PEGIDA supporters were ushered out of the area by police after the protest was dispersed, according to Dana Regev.

There were reports of several arrests, and a number of people were injured, including with cuts to their faces, according to DPA news agency.

Police said three officers and a reporter were injured in clashes with the PEGIDA supporters.

Police said half of those attending the PEGIDA rally were football hooligans and right-wing extremists. A spokeswoman said some of the hooligans were known to police and came from the eastern city of Dresden.

Dresden is the center of PEGIDA's activities.

Earlier in the day, several hundred women gathered in front of the cathedral in Cologne, situated near the central train station where the attacks mostly took place, to protest against violence to women.

They carried banners bearing slogans such as "No means no. That is our law. Keep off us," according to a reporter from AFP news agency.

The flash mob was called by women's groups on the Internet.

Some 1,000 people also demonstrated against both racism and sexism, with speakers warning against exploiting the New Year's Eve attacks to fuel xenophobic sentiment.

Police have come under heavy criticism for the way they handled the events on the night of December 31 from Germany's interior minister, Thomas de Maiziere. The police chief in Cologne, Wolfgang Albers, has been sent into provisional retirement amid allegations that he deliberately withheld information on the assaults.