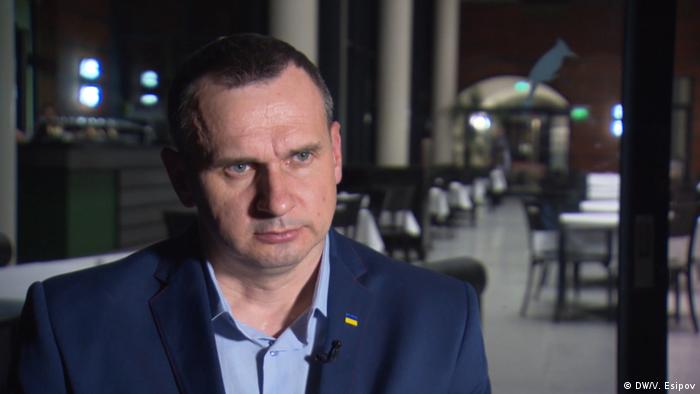 Russian authorities released film director Oleg Sentsov in a long-awaited prisoner exchange in early September, some 5 1/2 years after he was detained in Crimea and later convicted on terror charges. On a recent visit to Berlin, Sentsov spoke with DW about his arrest by Russia's main intelligence agency, the FSB, and the lessons he learned while serving his sentence.

DW: Tell us about what happened before you were arrested in Crimea in May 2014.

Oleg Sentsov: I was against Russia, against the occupation of Crimea and I was doing a lot of things someone might not have liked. [In Crimea — Editor's note] there was a group of arsonists, they torched a [Kremlin-aligned United Russia] party office. One of them, a guy named Chirniy, decided it wasn't enough, that they should do something more serious, that they needed to use a bomb to blow something up — but he wasn't really all there, mentally. As soon as one of his acquaintances learned of the plan, he reported him to the FSB.

The FSB didn't do anything for two or three weeks; they were reading reports, forming a picture based on the case files. And then there was an order that they needed to crack down on some terrorist organization ahead of Ukraine's 2014 presidential election, to show that Ukraine was planning a terrorist war and sabotage attacks in Crimea. The FSB remembered Chirniy's statements and detained and tortured him. He immediately told them everything he knew and even what he didn't know. After that, they detained a man he knew, Afanasyev. He was tortured as well. They asked him, 'Who is the top man around here?' And he told them he thought I was the person most in charge.

Read more: Opinion: Sentsov lost in court, but he is no loser

Why were you involved in the first place?

I was communicating with all the pro-Ukraine activists in Crimea. Everyone knew about what they did — they broke a window, threw in a Molotov cocktail and some linoleum burned up, along with the window sill. It was an act of hooliganism, but the FSB made it into a terror attack, and said they were targeting the United Russia party.

They would find us guilty either way; it was all decided long before. When they detained me, tortured me, interrogated me and found nothing, they still did not release me. They told me: 'We are going to put you in jail either way. Nobody is getting released. If you want to make it easy, name whomever you want from Ukraine's leadership, and you'll get seven years. If you refuse — you'll be the mastermind, and you'll get 20.' I refused, and they made into the mastermind. I got 20 years.

You said they tortured you?

Well, they interrogated me in the evenings, at night. FSB members would beat me, suffocate me with a bag, use batons to beat me over the heels. They undressed me, threatened to rape me. This is normal interrogation, it's nothing unusual. Maybe it will come as some sort of a shock to you, but after being in prisons I saw a lot of stuff like that. I heard enough to understand that this was the easy treatment.

When you declared yourself to be a pro-Ukraine activist in Crimea, you were obviously in the minority. Why did most Crimeans go a different way?

First of all, most of Crimean population is Russian-speaking anyway. Over the 20 years since Ukraine gained independence, there was an attempt to officially Ukrainize the place, which was conducted badly and turned people against it. And Russia slowly enlarged its soft power. There were some measures taken, some cultural events, all done quietly to strengthen ties below the board.

And it didn't start with Russian special forces occupying buildings on February 27, 2014. It started with the Maidan protests. Even though I was there, at Maidan, for all of those three months, I would go back to Crimea from time to time to see my family for a few days. And I saw those posters, those TV ads: 'Antimaidan, Maidan will not be allowed, fascists from Kyiv are trying to occupy us,' and all that. The local media, Russian media, was winding people up, telling them that what was happening in Kyiv was horrible and fascist, and that Nazi collaborators were taking power. It was not even remotely true, but people had been wound up and they believed it.

That was over five years ago. President Petro Poroshenko has since lost the most recent election, and Ukraine has a new president in Volodymyr Zelenskiy. Is this a Maidan victory?

Maidan's first demand was to oust [former President Viktor] Yanukovych, and we did that. The other demands have not been fulfilled, at least not completely. We wanted fair elections. This goal has almost been reached. During the last election, the losing sides and independent observers said the elections were fair; irregularities were quite insignificant, and had no influence on the result. This is also a victory, because it wasn't like that in Ukraine before, and it still isn't like that in Russia. Other demands included fair courts, fair police. The police have done some reforms, but most of them were low level changes. It's also still impossible to say now that our courts are fair. It's better than it was before, but not as good as we would like it to be.

You once publicly said you wanted to see Russian President Vladimir Putin defending himself at the International Criminal Court in The Hague. Did you mean that, or was it said in the heat of the moment?

I never let emotions hold sway over me, even less so when speaking in public. This is a little dream of mine, because it would be right to punish him for his crimes against Ukraine, against Russia itself, against Moldova, against Georgia, against European citizens. Someone definitely must answer for the Boeing incident [the downing of Malaysia Airlines Flight 17 over eastern Ukraine on July 17, 2014 — Editor's note]. Putin did not give the order directly, but shooting down a passenger plane was a consequence of his actions, of his systems. The same goes for the 13,000 people killed in the Donetsk and Luhansk war. I want him to answer for it in The Hague.

How did Ukraine and Russia, two countries that are so close, end up in this position?

You need to understand that this conflict is not a clash between two countries or two peoples. It's a clash of two worldviews. Progressive Ukrainians want to live like they do in Europe, with European standards and principles, in a country that is free and civilized. They oppose the so-called Russian world, the Russian regime, the Putin regime, whatever — those are the people who want to live like it was in the Soviet Union. But you can't go back to the Soviet Union; it's dead. This value system they strive for is inherently doomed. I've been in Russia for 5 1/2 years; I was in this informational area, that is why I now know Russia better than Ukraine and Europe. And I understand very well what is going on there.

And what is that?

The Russian leadership, and many people, dream of going back to the time of the Soviet Union. Imperial ambitions hold sway even with ordinary people, who don't have anything. They are halfway to homeless, but they are happy about [the annexation of] Crimea, they are happy to oppose the US. Their lives are not getting better in any way, but they are happy that 'we rubbed the US' nose in it, and Europe's too. We are killing Ukrainians in Donetsk and Luhansk, that's so great.' This is horrible, because the main problem of present-day Russia is not about its irregular political system and dead-end economy. It's about society being deeply degraded.

I don't know what they'll do about it — this dead end of societal development is quite terrifying. The political system can be changed in one or two days. I remember the Soviet Union falling apart in three days. I remember the Yanukovych regime falling in three months. The Putin regime will also fall sooner or later, but changing people's consciousness will be very difficult.

Facing the press for the first time since being freed in a major prisoner swap between Ukraine and Russia, the film director spoke of the suffering in Russian jails and issued a stark warning about Vladimir Putin. (10.09.2019)

US President Donald Trump told his Ukrainian counterpart Volodymyr Zelenskiy in a controversial phone call that Germany does "almost nothing for Ukraine." Is there any truth to his claim? (26.09.2019)

Volodymyr Zelenskiy has moved to disband parliament after being sworn in as the new president of Ukraine. The political novice is under pressure to deliver much-needed reforms after unseating incumbent Petro Poroshenko. (20.05.2019)