Servant of the People — a new political party created by President Volodymyr Zelenskiy — has gained a commanding lead in Sunday's parliamentary election. It remains unclear if the party will be able to rule on its own.

President Volodymyr Zelenskiy's Servant of the People party has scored some 42% in Ukraine's parliamentary election, according to preliminary results released by Ukraine's electoral body on Monday. This puts the party far ahead of the competition, with pro-Kremlin Opposition Platform-For Life placing second with only 13% of the vote.

The results came in with half of the ballots counted. The full result is expected later on Monday.

The 41-year-old comedian-turned-president has convinced voters of his Servant of the People party platform, which includes negotiating a political solution to the eastern Ukrainian conflict, boosting the economy and cracking down on corruption.

"Our main priorities — and I repeat this for every Ukrainian — are to end the war, return our prisoners and defeat the corruption that persists in Ukraine," Zelenskiy said late Sunday, responding to exit polls.

"Right now, he and his party have high ratings," Ukrainian politics expert Volodymyr Fesenko, who leads the Penta Center of Applied Political Studies, told German news agency dpa. "His party has the potential to achieve a dominating position in the new parliament."

It still remains unclear whether Servant of the People will need to form a coalition with one or more parties to govern. 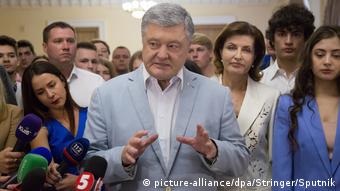 Nearly 200 of the 424 seats in Ukraine's parliament are filled by directly elected candidates, while the rest are voted in through party lists.

Golos, the newly formed party of rock star Svyatoslav Vakarchuk, won 6.3% of the vote. Other parties have apparently failed to clear the 5% barrier to enter the assembly.

Zelenskiy has already signaled he is willing to discuss a coalition with Vakarchuk if Servant of the People falls short of the majority in parliament.

"We invite Mr. Vakarchuk to talk," Zelenskiy said at his election headquarters.

Vakarchuk said it was "too early" to talk specifics but added that he was "ready for talks with other political forces that have the same principles as us."

The leader of the German CDU party, Annegret Kramp-Karrenbauer told the AFP news agency on Monday that she commended the democratic process at the parliamentary election. "As with the presidential election [in April], the election was an example of democracy and freedom for the whole region," she said.

"We expect [Zelensky] to go through with the reforms, to fulfill the hopes which many Ukrainians have in him," she added.