Kyiv′s Maidan protesters in it for the duration | Europe | News and current affairs from around the continent | DW | 05.12.2013

Ukrainian demonstrators are setting up camp in the capital's main square and preparing for a lengthy stay. They're calling for integration with the European Union, and have no intention of backing down. 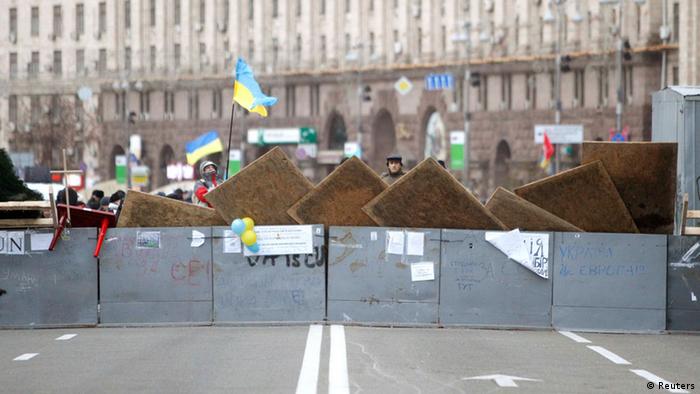 Despite the wintry weather, the demonstrators on the Maidan, or Independence Square, in central Kyiv are not going anywhere. Thousands of Ukrainians are sticking it out in the wind and the cold, staying overnight and singing songs while warming themselves at fires burning in steel barrels.

To occupy their time, protesters can often be heard singing the national anthem or watching films shown on big TV screens. On a large stage, musicians perform for the crowd, including the famous singer Ruslana, the 2004 winner of the Eurovision Song Contest. 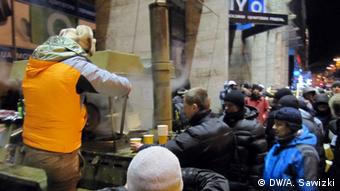 Hot drinks are distributed to protesters

The people of Kyiv have started calling the square Euromaidan, because the protests here are intended to push through Ukraine's integration with the European Union. But despite their committed presence, the biggest problem for demonstrators and protest organizers is the lack of heated structures where the people can go to warm up.

One of the tent city's leaders is Andriy Parubiy, a member of parliament with the opposition party Fatherland. Dubbed "Commander" by the demonstrators, Parubiy has made sure people are able to make use of the nearby buildings like the union hall, the city council building, a cultural center and St. Michael's Cathedral to warm up and rest.

Life for the demonstrators on Independence Square is gradually being organized. Volunteers distribute sandwiches and hot drinks. Ordinary citizens are donating food - but so are cafés and restaurants in the surrounding area. They're helping out with bread, biscuits, cheese, sausages, tea and coffee.

Plenty of donations of money and materials are also coming in, said Svyatoslav Chanenko, a doctor and member of parliament for the right-wing nationalist party Svoboda (Freedom) in an interview with DW. 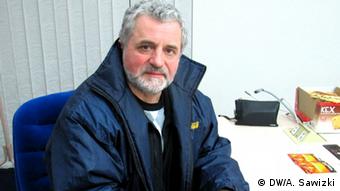 "Someone recently brought us a bus full of heated insoles for shoes. You can't imagine how many people have been bringing us medicine, food and money," he said, adding that a number of Kyiv pharmacies have also been donating medication.

Chanenko is responsible for the medical care for demonstrators, as he was during the 2004 protests of the Orange Revolution. He's not expecting any epidemics or other serious medical problems. "People's diets are disrupted in such a situation, and they're lacking sleep and can't shower. But their enthusiasm for the protests provides a strong natural immunity," he said.

The opposition has formed a Committee of National Resistance, which has been organizing the protests. At the head of the committee are the leaders of the three opposition parties: Vitali Klitschko with his Ukrainian Democratic Alliance for Reform (UDAR), Svoboda's Oleh Tyahnybok, and Arseniy Yatsenyuk, leader of Fatherland, the party of jailed former Prime Minister Yulia Tymoshenko. The committee is also made up of representatives from several social organizations that have also supported the protests with money and other donations. 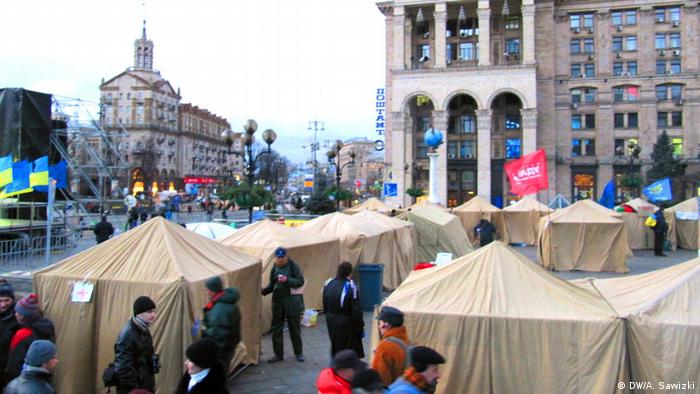 A tent city has sprung up on Independence Square

The committee has ensured around the clock medical care at Independence Square, with doctors volunteering their time. Among them is Anatoliy Besushko, who volunteers at the square for 12 hours a day.

Besushko is based in the union hall, where he takes care of his patients. "Most of the time, they have a cold or an acute respiratory illness," he told DW. But in the last few days he also had patients who were injured in the November 30 protests when security forces failed to evict the protesters with force, or those injured after the clashes in front of the presidential office on December 1.

'I'm not here for money'

The Committee of National Resistance has said it's prepared for demonstrations to continue for a long time. The number of protesters who have freely devoted their time to occupy Independence Square around the clock has reached 3,000, said Fatherland's Parubiy. He told DW that the men at the square are now being trained to react appropriately in the case of a violent eviction attempt by the authorities.

Meanwhile around the square, countless merchants are selling flags, thick scarves, hats and gloves. A small Ukrainian or European flag costs around 1 euro ($1.36). Business seems to be brisk, though they don't care to comment.

Students are also distributing flags to the protesters, but these have been made freely available by the opposition parties. Another favorite accessory is a sticker with the slogan, "I'm not here for money."

Ukrainian demonstrators continue to call for a new government, despite limited pro-EU assurances from the president. The scale of the protests in Ukraine has surprised politicians and experts in both the East and West. (03.12.2013)