France, Germany, Poland Call for Equal Partnership With Russia | Europe | News and current affairs from around the continent | DW | 05.12.2006

The leaders of France, Germany and Poland on Tuesday called for "an equal partnership" between Russia and the EU, and for the resolution of a trade row between Moscow and Warsaw. 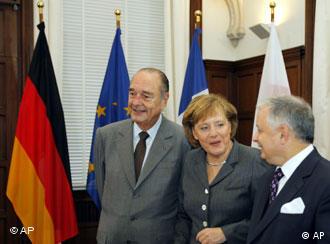 "We recognize the importance of Russia as a strategic partner," the leaders said in a joint statement. "We will further support the development of a long-term partnership with Russia based on common interest and equal rights, in particular in the trade and energy sector."

Polish President Kaczynski called on Russia to lift an embargo on meat and plant products that prompted his government to block the start of talks last month between the European Union and Russia on a new partnership deal.

"I hope to see this embargo lifted as soon a possible," Kaczynski said, adding that Poland looked forward to then playing "an active part" in negotiations between the EU and Moscow. 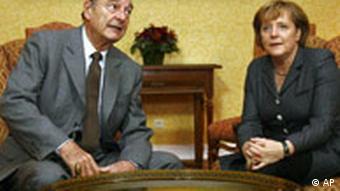 Merkel and Chirac met ahead of the Weimar Triangle summit

But the conservative Polish leader insisted that there must be recognition in the bloc's relations with Russia that "states have equal rights and obligations."

French President Chirac stopped short of pressing Moscow to lift the embargo on Polish produce, simply saying, "I hope to see this dispute resolved as soon as possible."

The summit was Chirac and Merkel's first three-way meeting with Kaczynski, who has trod a rocky road with both Berlin and Moscow since he was elected last October.

On the eve of the summit, Kaczynski sharply criticized Germany's policy of strengthening ties with Russia.

Merkel has made energy security for Europe, which depends in part on relations with Russia and its rich natural resources, a priority of the German presidency of the 25-member bloc in the first half of 2007.

German Chancellor Angela Merkel hosts a summit with the leaders of France and Poland Tuesday, less than a month before Berlin takes over the EU presidency amid high hopes that it can resolve power struggles in the bloc. (04.12.2006)