France, Germany Agree That Iran Must Stay Nuke-Free | Europe | News and current affairs from around the continent | DW | 12.11.2007

In the wake of talks in Berlin, the leaders of France and Germany said they agreed on the need for diplomacy in dealing with Tehran, and pledged to do their utmost to keep nuclear weapons out of Iranian hands. 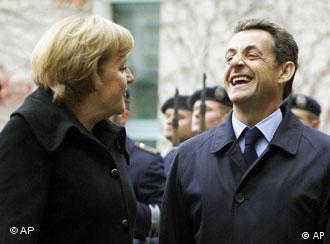 "We are on the same wavelength: no nuclear weapons for Iran," Sarkozy told the AFP news service. "Germany and France believe in the usefulness of sanctions."

Merkel said the two countries agreed that a new round of UN sanctions may be necessary to stop Iran from pursuing uranium enrichment.

"The common position that, if Iran does not change its stance, further sanctions must be considered in the UN framework," she told reporters after the meeting.

Germany is Iran's most important European economic partner, and Merkel said she and Sarkozy discussed how EU-Iranian trade ties might be recalibrated in the event of Tehran's continued defiance. 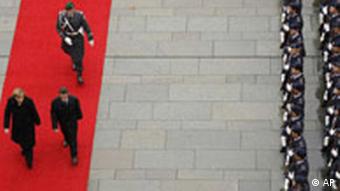 In Berlin, Sarkozy got the treatment due a head of state.

She added that there was also "broad agreement" that support form China and Russia -- two permanent members of the UN Security Council -- should be sought to back any punitive measures.

"We want to have Russia and China in the world community that makes clear to Iran that we cannot resign ourselves to this nuclear program," Merkel said.

Germany plus the five members of the United Nations Security Council -- Britain, China, France, Russia and the United States -- have negotiated with Iran for years to convince it to stop enriching uranium, which can be used to generate energy but also to make an atomic bomb.

The US and several of its European allies believe Iran is trying to develop a nuclear weapon, a charge Tehran has repeatedly denied.

Sarkozy and Merkel each held talks with US President George W. Bush last week that concluded with calls for a diplomatic solution to the conflict with Tehran over its sensitive nuclear work.

Sarkozy brought Prime Minister Francois Fillon and other members of his cabinet with him to Berlin for the talks, which were part of regular Franco-German government consultations.

Also on the agenda was integration, an issue faced by both Germany and France. 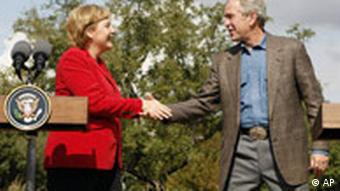 But the two leaders concentrated on the Middle East ahead of the US-sponsored peace conference for the region due to take place in Annapolis, Maryland, at the end of the month.

Both Merkel and Sarkozy discussed the conference with US President George W. Bush during their separate visits to the United States over the past week.

During the Berlin visit, Sarkozy and Fillon accompanied Merkel to a high school where they discussed current affairs with pupils.

Opinion: Europe and the US Need Each Other

George Bush received Nicolas Sarkozy in the White House and Angela Merkel at his Texas ranch last week. The meetings took different tones, but both show the gap is closing over the Atlantic, said DW's Christina Bergmann. (12.11.2007)

US Wants More Than Merkel Can Give, Expert Says

Reginald Dale from the Center for Strategic and International Studies in Washington spoke to DW-WORLD.DE about German Chancellor Angela Merkel's two-day visit to the US this weekend, which begins Friday, Nov. 9. (09.11.2007)