'Fire and Fury': Trump too overwhelmed to consider Europe

The new book depicts a president too consumed with chaos in his own administration to make time for allies. Trump reportedly spent a crucial G20 summit in Hamburg planning how to deal with his children's Russia ties. 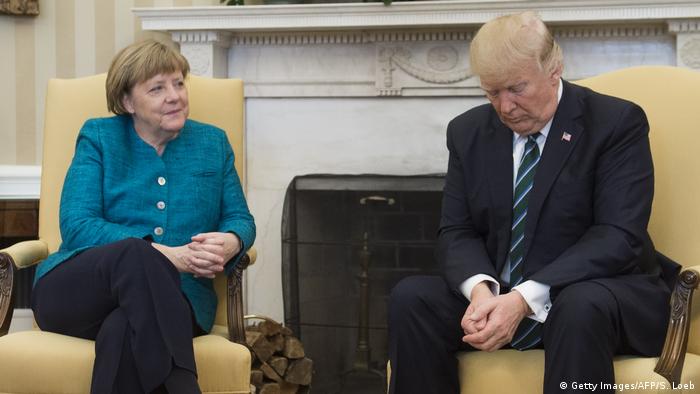 "Fire and Fury," the new tell-all book from journalist Michael Wolff about the chaotic, unhappy inner workings of the Donald Trump White House is full of juicy stories — betrayal, accusations of treason, infighting, and name-calling.

But what might be most interesting for the US' many allies around the world is what is not mentioned — namely, almost no foreign countries or leaders other than those of Russia and China.

For those left baffled by Trump's flip-flopping attitudes on both the European Union and NATO, Wolff's book offers a possible explanation. "Fire and Fury" depicts a president who is too overwhelmed, concentrated on problems within his administration and not competent enough to take care of crucial relationships abroad.

The UK, often seen as the US' oldest and most important friend, is mentioned only once in passing, as is its leader Theresa May (in a paragraph referring to seating arrangements) and the EU. There is no mention of modern Germany (though Nazis turn up a few times), Chancellor Angela Merkel or France, nor of most of Washington's other European allies.

According to Wolff, who spent months conducting interviews and watching the routine inside the White House, Trump had hoped that his 24-hour visit to Brussels in May would cement "the line between Western-alliance-based foreign policy, which had been firmly in place since World War II, and the new America First ethos."

Unfortunately for Trump, his short trip to Europe was overshadowed by coverage of the investigation into collusion between his presidential campaign and Russian agents, being conducted by Robert Mueller.

A second chance to build ties presented itself in July, at the G20 summit held in the German city of Hamburg. However, according to Wolff, Trump and his team spent most of the time trying to figure out how to deal with revelations that Donald Trump Jr had met with Russian lawyers at Trump Tower during the campaign, as well as the president's son-in-law Jared Kushner having financial ties to Russian businesses.

"As the president and his team huddled on the plane, the central subject was not the conference, it was how to respond to the Times story about Don Jr.'s and Jared's Trump tower meeting," Wolff writes.

The White House has dismissed Wolff's book as "lies," and sent a letter to publisher Henry Holt & Co. to stop the book's release.

In response, the company brought forward the publication to Friday instead of next week. Wolff, for his part, has presented records of his interviews with both President Trump and several staffers, including former adviser Steve Bannon, as evidence that the stories presented in the book are true.

On Friday, Wolff also jokingly thanked the president for increasing sales of his book by trying to suppress it.

US President Trump stepped up his warnings for North Korea despite German Chancellor Merkel condemning his "verbal escalation." The European Union has meanwhile called an extraordinary meeting to discuss its options. (11.08.2017)