An attorney for Donald Trump has sent a "cease and desist" letter to Steve Bannon. The former White House strategist is accused of making "defamatory statements" in a new book on the presidency to be published Friday. 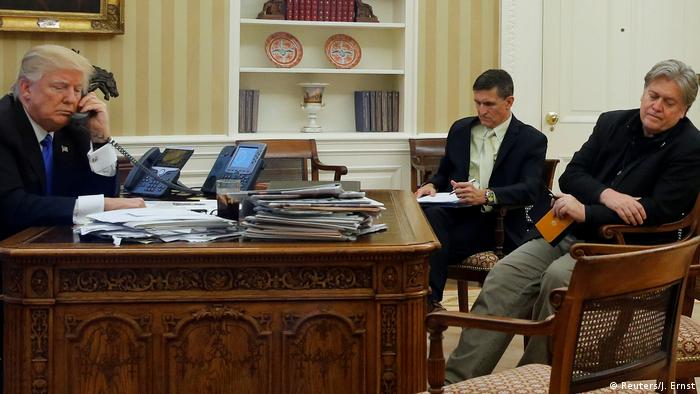 Bannon is cited repeatedly in Wolff's upcoming book "Fire and Fury: Inside the Trump White House," which was due to hit the shelves next week but has seen its publication date pulled forward to Friday.

Harder also threatened legal action against Bannon for his "disparaging statements and in some cases outright defamatory statements" on Trump's family and campaign team.

On Thursday evening, Trump took to Twitter to again dismiss the book's revelations, saying they had no validity.

"I authorized Zero (sic) access to White House (actually turned him down many times) for author of phony book," Trump said. "Full of lies, misrepresentations and sources that don't exist. Look at this guy's past and what happens to him and Sloppy Steve."

- Nuclear buttons: How easy is the beginning of the end?

'You should have called the FBI'

In remarks shared in US and British media, Bannon criticized a meeting between Donald Trump Jr., his son-in-law Jared Kushner and a Russian lawyer in 2016. Trump's son was led to believe that Moscow might have compromising information on Democratic candidate Hillary Clinton. The meeting also included Trump's son-in-law Jared Kushner as well as then-campaign chairman Paul Manafort.

"The three senior guys in the campaign thought it was a good idea to meet with a foreign government inside Trump Tower in the conference room on the 25th floor — with no lawyers. They didn't have any lawyers," Bannon reportedly said.

"Even if you thought that this was not treasonous, or unpatriotic, or bad s***, and I happen to think it's all of that, you should have called the FBI immediately," he is quoted as saying.

In response, Trump said that his former aide had "lost his mind" after leaving the White House in August 2017. "Now that he is on his own, Steve is learning that winning isn't as easy as I make it look."

On Wednesday, White House press secretary Sarah Huckabee Sanders said the president was "furious" and "disgusted" by the claims presented in the book. She said that Michael Wolff's account contained "completely false claims against the president, his administration and his family," and described it as "trashy tabloid fiction."