Nuclear buttons: How easy is the beginning of the end?

Donald Trump and Kim Jong Un recently referred to their "nuclear buttons," with the US leader boasting that his was "bigger" than Kim's. The US nuclear briefcase, however, doesn't really have a big red button... 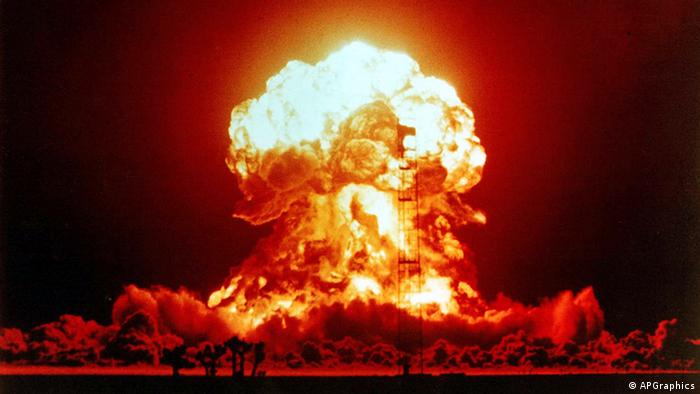 The image of a president unleashing Armageddon with a press of a button is well established in modern culture, and is now reinforced by world leaders themselves.

North Korean dictator Kim Jong Un said this week that a "nuclear button" was always on his desk. According to the North Korean leader, his nuclear arsenal could reach the entire US mainland.

"This is reality, not a threat," he said in his New Year speech.

US President Donald Trump quickly shot back at Kim Jong Un at Twitter, saying that his own button was "much bigger & more powerful one than his, and my Button works!"

As much of the North Korean nuclear program is secluded from the public, Kim Jong Un's claim of having a nuclear button on his desk might as well be true.

According to all available information, however, the US does not have a "nuclear button" as such. Instead, it has a "nuclear football" — a portable launch terminal in a black leather briefcase.

What is the "nuclear football"? 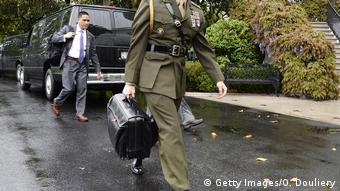 The black, metal-framed, 45-pound (20.4 kilo) briefcase holds a communications device that allows the president to relay his launch orders to the military. Anytime a president leaves the White House, he is followed by a member of the US military with the briefcase.

A thoroughly-vetted and psychologically tested team of five is cleared to carry the nuclear football, each of them coming from a different branch of the US military. For security reasons, the carrier is ordered to travel in the same elevator with the US head of state and stay only a few steps away from him at all times. The current vice-president is also assigned a briefcase and a carrier, with another functioning nuclear football also available in reserve.

The US military started developing the nuclear briefcase in the John F. Kennedy era, following the Cuban missile crisis in 1962. It was reportedly nicknamed "football" after a secret Cold War defense plan dubbed "Dropkick," a term commonly used in American football. (The name was also used in Stanley Kubrick's 1964 movie on nuclear annihilation, Dr. Stangelove).

What is in the case?

Most importantly, the case holds a transmitter linked with the launch command.

The terminal itself does not have a launch button. Instead, the president is required to input codes provided to him upon taking office. They are dubbed Gold Codes and printed on a piece of plastic that resembles a credit card. Providing the codes to launch officers does not automatically initiate a nuclear strike as the codes serve to establish the president's identity as the commander-in-chief.

According to the 1980 book Breaking Cover by ex-chief of White House Military Office Bill Gulley, the briefcase also contains a booklet with option to retaliate against the attack, a booklet listing safe locations for the president to go in case of an emergency, and an instruction manual on how to use the emergency broadcast system to alert the nation.

What are the attack options?

The retaliation options were drastically simplified in the Jimmy Carter era (1977 – 1980) and were later referred to by a Clinton military aide as a fast-food "menu" that the president can choose from. The options reportedly include Major, Selected, and Limited attack options, ranging from an attack aimed to obliterate the opponent country to targeted strikes on the enemy's own launch sites or government facilities.

The president is required to carry the "biscuit" code card with him at all times, although both Jimmy Carter and Bill Clinton both reportedly misplaced it during their respective presidencies. Ronald Reagan was separated from his card after the assassination attempt in 1981. Reagan's clothing was removed when he was rushed into the operating room, and the biscuit was later found in a hospital plastic bag. The carriers were also repeatedly left behind during presidential trips by accident.

What was the Soviet response?

The Soviet Union created a similar device in the early 1980s. As it was aimed to be used by the aging communist leader Leonid Brezhnev, the Russian scientists focused on making the device as simple as possible. According to one of the designers, Valentin Golubkov, it actually did have a launch button, although it also required the launch codes.

"Let's say it was something like: red one for launch and a yellow one to cancel," Golubkov told the Russian mass-circulation daily Komsomolskaya Pravda. "That was it."

An updated version of this device is now controlled by the Russian president Vladimir Putin.

Can anyone stop the president from ordering a nuclear strike?

Not officially. The system was intentionally set up so that the president, as the commander-in-chief, has the sole authority to retaliate or even strike first and start a nuclear war. The president is expected to discuss the issue with senior military and political leaders, including the vice president, but the decision is ultimately his.

Some sources claim that the US defense secretary would be required to verify that the launch order really came from the president, although it would have no power to officially veto it. However, little information is available on the issue, and the president could still fire the secretary of defense for disobedience.

After the Watergate scandal broke in 1972, Richard Nixon's Secretary of Defense James Schlesinger quietly instructed the Pentagon war room to double check with him if the president ordered a nuclear strike. Schlesinger was reportedly worried about Nixon's drinking and erratic state of mind.

The move was unofficial and likely illegal.