Nobel Peace laureates: Nuclear war is 'one tantrum away'

The International Campaign to Abolish Nuclear Weapons has issued a stern warning to world leaders during a speech in Oslo. ICAN head Beatrice Fihn likened nuclear bombs to "a madman's gun held permanently to our temple." 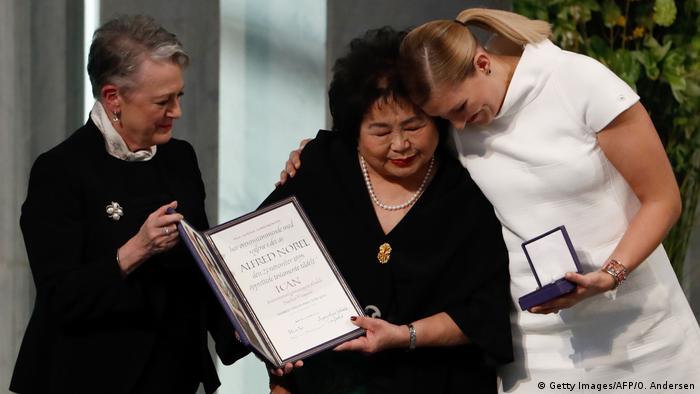 An anti-nuclear weapons campaign group accepted the 2017 Nobel Peace Prize during the elaborate awards ceremony on Sunday in Oslo. The Norwegian Nobel Committee had picked the International Campaign to Abolish Nuclear Weapons (ICAN) for its work on addressing the gap in international law regarding the restriction of nuclear weapons.

In her acceptance speech, Beatrice Fihn, executive director of ICAN, warned that mankind's total destruction at the hands of nuclear weapons was just one "impulsive tantrum away."

"The only rational course of action is to cease living under the conditions where our mutual destruction is only one impulsive tantrum away," she added.

"A moment of panic or carelessness, a misconstrued comment or bruised ego could easily lead us unavoidably to the destruction of entire cities."

Fihn described nuclear weapons as a "madman's gun held permanently to our temple."

'A world without nuclear weapons is not a dream'

ICAN, which comprises of a coalition of 468 non-governmental organizations from 101 different countries, has its headquarters in Geneva.

Fihn was accompanied at the ceremony in Oslo City Hall by Setsuko Thurlow of Japan — a survivor of the 1945 atomic bombing of Hiroshima. Thurlow was 13 at the time of the bombing and has campaigned on behalf of ICAN.

Thurlow described the "procession of ghosts" she witnessed on the morning of August 6, 1945.

"The hair was standing up and they were all burned on the skin and their flesh was hanging from their bones," she said.

"Some were carrying their eyeballs. It just was like hell on earth," added the 85-year-old, who now lives in Canada.

Meanwhile, the recipients of the Nobel Prizes for medicine, physics, chemistry, literature and economics received their awards in Stockholm.

Americans Rainer Weiss, Barry C. Barish and Kip S. Thorne received the Nobel Prize for Physics for the first direct observation of universal gravitational waves while the award for Chemistry was given to Jacques Dubochet of Switzerland, American Joachim Frank, and Briton Richard Henderson for discoveries in cryo-electron microscopy that provide detailed imagery of biomolecules invisible to the human eye.

American scientists Jeffrey Hall, Michael Rosbash and Michael Young received the Nobel Prize in Medicine for their research into how the internal biological clocks of organisms align themselves with natural cycles of night and day.

Richard H. Thaler of the US was recognized with the Nobel Prize in Economics for his work in behavioral economics focused on "understanding the psychology of economics," while Japanese-born British author Kazuo Ishiguro, best known for his Booker Prize-winning novel "The Remains of the Day," received the Nobel Prize for Literature for works that uncover "the abyss beneath our illusory sense of connection with the world."

The event was attended by Sweden's King Carl XVI Gustaf and his family.