A landmark Cold War-era nuclear arms control treaty between the United States and Russia is at risk of collapsing. A tit-for-tat escalation could endanger security, divide NATO and undermine arms control agreements. 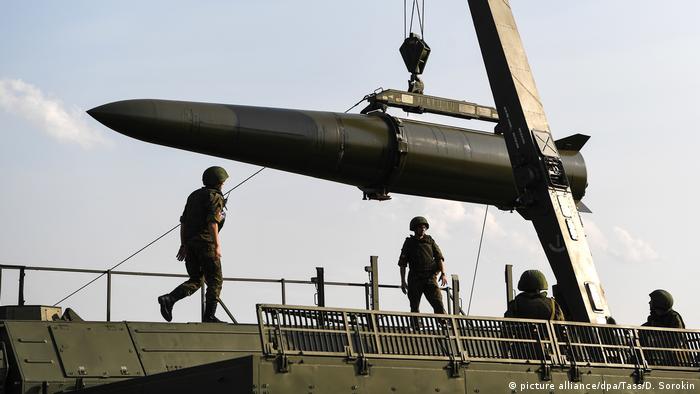 The Obama administration in 2014 first accused Moscow of producing and testing a new ground-launched cruise missile in violation of the Intermediate-Range Nuclear Forces Treaty (INF Treaty).

In March this year, General Paul Selva, the vice chairman of the Joint Chiefs of Staff, accused Russia of actually deploying the missile system, saying it was meant to threaten NATO facilities. In November, a top Trump administration official publicly identified it as the Novator 9M729 missile, or NATO-designated SSC-8.

The 1987 treaty signed between President Ronald Reagan and Soviet leader Mikhail Gorbachev bans Russia and the United States from possessing, producing or conducting test flights of ground-launched cruise missiles and ballistic missiles with a range of 500 to 5,500 kilometers (310 to 3,420 miles). It allows sea-based and air-delivered missiles at those ranges. The INF treaty resulted in the destruction of an entire class of conventional and nuclear-capable missile systems, boosting security toward the end of the Cold War.

Russia has repeatedly denied US accusations, countering that the United States is violating the treaty in three ways. The main accusation relates to the United States deploying the ground-based Aegis anti-missile system in Europe, something Washington has refuted by arguing it is a non-offensive, anti-ballistic missile defense system.

In a considerable escalation of a simmering dispute, the Trump administration is now "pursuing economic and military measures intended to induce" Russia to comply with the INF Treaty, the State Department said in a statement on Friday marking the 30th anniversary of the treaty.

"This includes a review of military concepts and options, including options for conventional, ground-launched, intermediate-range missile systems, which would enable the United States to defend ourselves and our allies, should the Russian Federation not return to compliance," said the statement, outlining the Trump administration's strategy for the first time. "This step will not violate our INF Treaty obligations."

The State Department said it was prepared to "cease such research and development activities" if Russia fully complies with its INF Treaty obligations.

Research and development of ground-launched intermediate-range missiles is not a violation of the treaty, "but going down this road sets the stage for Washington to violate the agreement at some point and it takes the focus off of Russia's INF violation," Daryl G. Kimball, the executive director of the Arms Control Association, said in a statement after the US announcement. "Rather than persuading Russia to return to compliance, this action is more likely to give Moscow an excuse to continue on its current course."

Responding to the United States on Friday, Russia's Foreign Ministry said it was committed to keeping the INF Treaty alive but that the "the language of ultimatums" and threats was unacceptable.

The US and Russian statements come as Washington called a meeting on December 12-14 of the Special Verification Commission (SVC), a technical body designed to address compliance issues.  The SVC met last November over the same issue without a resolution.

The accusations against Russia involve complex technical and legal aspects of the INF Treaty.

The details of the alleged violations the United States has presented to Russia are still unclear. From what is known, "it is not like a smoking gun in the sense that a violation might be indirect," Pavel Podvig, the director of the Russian Nuclear Forces Project, told DW.

He added that it appears that the United States has fairly strong evidence or is fairly confident of a violation, but at the same time that Russia may be able to maintain a degree of plausible deniability.  According to Podvig, a likely scenario is that the 9M729 is almost the same as a sea-launched Kalibr missile observed to have been tested at INF range. 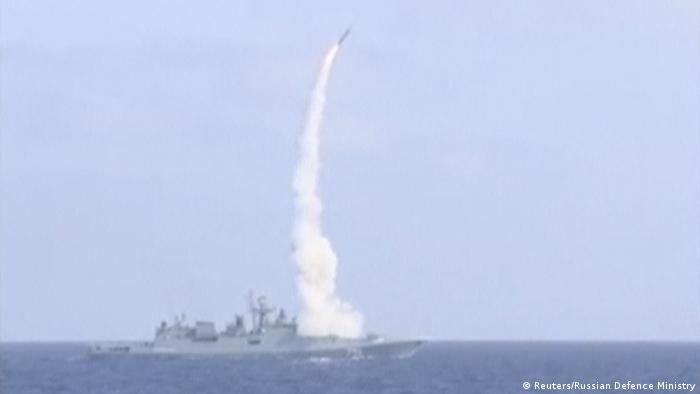 A Russian frigate fires a Kalibr cruise missile from the Mediterranean Sea at "Islamic State" targets in Syria, September 2017

The United States is trying to rally its NATO allies to take punitive measures to force Russia to comply with the INF Treaty. Germany's Der Spiegel reported that US Defense Secretary James Mattis issued an ultimatum to a meeting of NATO defense ministers in Brussels last month when he presented evidence of Russian violations.

He reportedly said the alliance must come up with a common response to get Russia to comply with the INF Treaty by next summer's NATO summit; otherwise, the United States would go it alone.

The Trump administration and Defense Department are under pressure to respond. The US Congress in its 2018 Defense Authorization Bill mandated the research and development of mobile ground-based intermediate-range cruise missile launchers and "a report on the cost, schedule, and feasibility to modify existing and planned missile systems."

Some experts criticize this approach, arguing that it would be costly, militarily unnecessary, divide NATO and ultimately be ineffective.

"The US, and to some extent in NATO, may be overestimating the power of pressure on Russia today," Podvig said.

Land-based missile systems today provide only a marginal capability, unlike during the potential conflict scenarios during the 1970s and 80s. Both sides are already allowed to possess sea and air-launched missiles at INF range.

"US forces are already stocked with formidable air- and sea-launched missiles that can cover the same targets. Furthermore, a new US INF missile would take years to develop and cost billions of dollars that would drain funding from other military programs," Kimball of the Arms Control Association wrote.

Threat to other arms control agreements

Perhaps more importantly, even if the United States deployed land-based intermediate-range missiles in Europe, there is no political appetite among European countries to host them, let alone a nuclear-capable system.

"Russia could have its own missiles with nuclear warheads and Moscow certainly understands that there is no way NATO will deploy new nuclear systems in Europe; there is just no country that will take it," Podvig said. "It would divide and break the alliance."

The collapse of the INF Treaty or continued mutual allegations without a resolution threaten to undo trust around other bilateral arms control agreements.

As Mattis said at his Senate nomination hearing, it is in the US' best interest to return Russia to compliance, otherwise it "could erode the foundations of all current and future arms control agreements and initiatives."

A breakdown of the INF Treaty could take the focus away from and undermine the 2010 New Strategic Arms Reduction Treaty. That strategic nuclear missile arms control agreement must be extended through US-Russia agreement by the treaty's expiration in 2021.

Germany's top spy, Bruno Kahl, has delivered a dramatic warning about Russia's military ambitions in the European Union. But some analysts think that such alarmism only plays into the Kremlin's hands. (15.11.2017)