Many had seen a win for far-right Geert Wilders in the Netherlands as a harbinger of elections in France and Germany this year. Despite his clear loss, populist figures around Europe claimed a 'partial victory'. 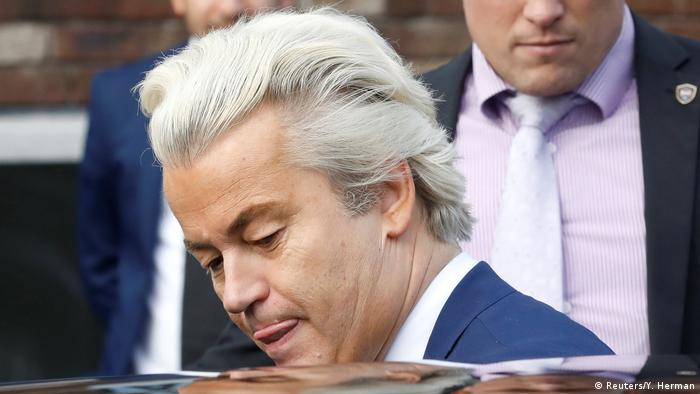 Despite the defeat, many far-right and populist parties - riding a wave of support since Brexit last summer and Donald Trump's win in the US presidential election - have heralded Wilders a success.

- Election night: as it happened

Konstantin Kosachev, chair of the Foreign Affairs Committee in the Russian parliament, wrote on Thursday that Europe had been "weakened" by the elections in the Netherlands.

"French Presidential candidate Emmanuel Macron and German Chancellor Angela Merkel might be able to breathe for the time being after the victory of Rutte. But the panic and fear among the established European elites facing the challenges of the 21st century remain palpable," Kosachev posted on Facebook.

"An election in a single EU country does not change the problems."

Russian hackers allegedly targeted the Netherlands as a "warm up" for elections in Germany and France this year, DW reported earlier this month.

The Dutch secret service (AIVD) revealed that foreign countries, in particular Russia, had tried to hack into about 100 email accounts of Dutch government employees.

Meanwhile, after security experts established that the Netherlands' electoral software was outdated, the Ministry of Home Affairs decided that all ballot papers be counted by hand.

France: 'a success even though Wilders lost'

The secretary general of France's far-right National Front party, Nicolas Bay, on Thursday said he was "encouraged" by gains for the anti-Islam and anti-EU Wilders, saying it was a "success even though Wilders lost."

"It's a real success,"  Bay told France Inter radio, highlighting the rise in the number of seats won by Wilders' party from 15 to 20 and calling it a "partial victory even if not the final victory."

Rutte's figures, he said, had been boosted late in the campaign by a standoff with Turkey in which his government had refused to let Turkish government politicians stage rallies in the Netherlands, where many Turkish expatriates live.

Opinion polls show far-right Front National leader, Marine Le Pen winning the first round of France's presidential election in April, but then losing a decisive head-to-head vote in May.

Le Pen wants to curb immigration and take France out of the eurozone if she wins the French presidential election on April 23 and May 7.

Turkey: 'no difference between the social democrats and fascists'

"Now the election is over in the Netherlands...when you look at the many parties you see there is no difference between the social democrats and fascist Wilders," Mevlut Cavusoglu, Turkey’s foreign minister, said at a rally on Thursday.

The minister then claimed "religious wars will soon begin" in Europe, despite the defeat of Wilders.

"All have the same mentality. Where will you go? Where are you taking Europe? You have begun to collapse Europe. You are dragging Europe into the abyss," he said.

Wilders had sought to capitalize on a diplomatic row between the Netherlands and Turkey during his election campaign, leading a small protest outside the country's embassy and calling President Recep Tayyip Erdogan a "dictator."

A dispute over political campaigning for an April constitutional referendum in Turkey has intensified since a rally to be held in Rotterdam was cancelled last weekend.

"I can not hide the fact that we wanted the PVV and Wilders to have had a better result," the leader of the populist Alternative for Germany (AfD) Frauke Petry told the German press agency DPA on Thursday.

"Wilders addressed the right issues in the election campaign and thus pushed the other parties a little way forward. But he might not always have had the right tone. Citizens want a clear message, but they are afraid of a hard tone," Petry said.

AfD had been surging in the polls last summer, but with six months to go before German elections it has faded.

A regular poll of German voters puts its support at 11 percent - down from 16 percent last summer, and other polls have put support as low as 8 percent. It needs more than 5 percent of the vote to win seats in parliament.

The huge influx of migrants Germany experienced in 2015 and 2016 - arguably the biggest single issue to boost AfD's vote - has largely dropped off the radar as the numbers of new arrivals have declined.

Voters weary of Angela Merkel after 12 years in office, who may have been leaning toward AfD, also have a fresh option in Martin Schulz, who became the Social Democrats' candidate for chancellorship in January.

UK: 'a revolution against global governments'

Marine Le Pen was interviewed by the former euroskeptic Ukip leader Nigel Farage on LBC radio on Wednesday evening. Farage praised Le Pen, saying she had "a connection with the French people" and asking her why she felt she was the best candidate in the field.

Earlier in the day, Farage told Fox Business: "If I had said to you four years ago that Geert Wilders would be virtually neck and neck with the prime minister, you would've have said I must have been smoking something funny."

"You know the fact that he's there neck and neck shows you the amazing advances that have been made," said Farage.

"I think through the Netherlands, through the French elections, etcetera, you will see a continuance of this revolution against global governments."

Farage said a win by Le Pen "would be as big as Brexit or Trump."

Among those targeted in the alleged Russian hacking were journalists, government officials and businesses. The indictment is the first time US officials have formally charged Russian officials for cybercrime. (15.03.2017)

A French appeals court has upheld an earlier guilty verdict over racist remarks by National Front founder Jean-Marie Le Pen. At a 2013 rally, he described Roma as having a 'foul-smelling presence' in Nice. (27.02.2017)